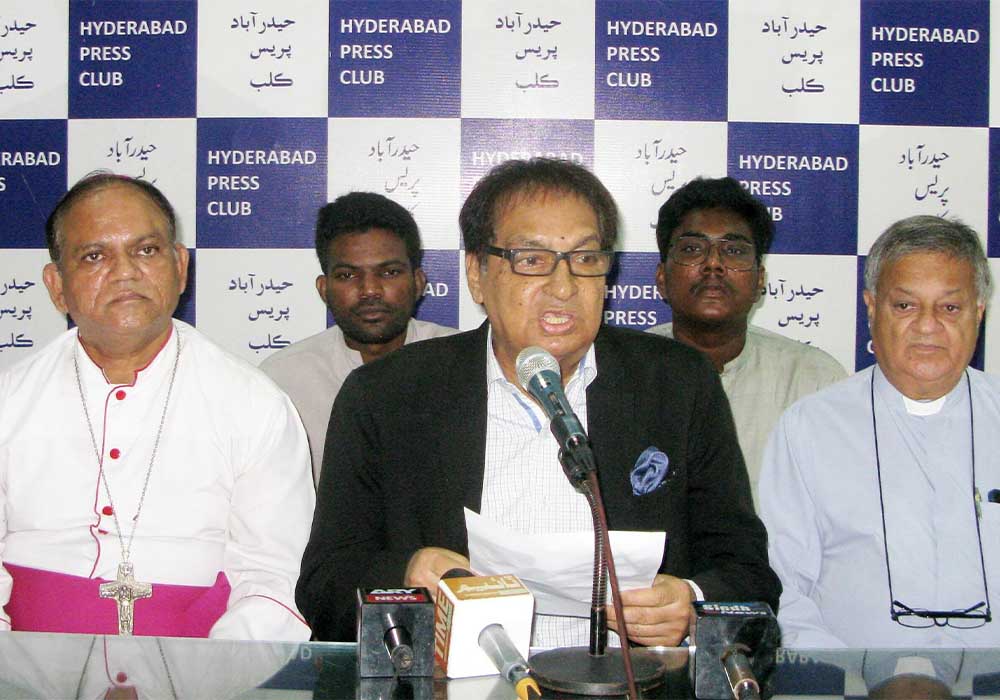 Local representatives of religious minorities in Hyderabad on Tuesday accused India of trying to portray a negative image of Pakistan by capitalising on the events of August 21, when unrest ensued across the city over an incident of alleged desecration of the Holy Quran.

Law enforcement agencies had resorted to teargas shelling and fired into the air in different areas of Hyderabad on Sunday as enraged crowds had forced their way into a business plaza by breaking windowpanes to get hold of a Hindu man they accused of desecrating the Holy Quran. The unrest continued during the early hours of Monday as officials tear-gassed the unruly mob which tried to gain entry to the business centre. Additional security was called and Rangers teams were deployed across the city.

Minority leaders gathered together on Tuesday and organised a press conference where they condemned the incident and called for restoring peace in Hyderabad.

They claimed that the Indian government was using the incident to portray Pakistan in a negative light.

“Religious minorities are being well protected by state institutions in Pakistan, whereas the situation is worsening for religious minorities in India,” said GM Parkash, a Hindu community leader and member of the National Lobbying Delegation for Minorities. He advised the Indian government to ensure the rights of minorities and probe the deaths of 11 Bheel community members in 2020.

The Hindu community leader alleged that the victims were poisoned by “religious zealots” belonging to Rashtriya Swayamsevak Sangh (RSS).

Parkash said that following Sunday’s incident, the Indian media had taken it upon itself to tarnish Pakistan’s image and spread propaganda that minorities living in Pakistan were unsafe.

All of the speakers condemned Sunday’s incident and called for a thorough probe to find those responsible.

Bishop Samson lauded the efforts of police and Rangers personnel for their quick response in controlling the unruly mob through tear gas shelling. He strongly condemned the incident and reiterated that anti-Pakistan forces were trying to capitalise on it. Meanwhile, Reverend Daniel echoed the same concerns and referred to the teachings of various religions on peace and inter-faith harmony. “We all are children of Adam and respect all faiths while coexisting in harmony”, he said.

PHC’s Ramesh called for punishing those involved, adding that minorities felt secure in Sindh due to the provision of security. Separately, a sessions court in Hyderabad granted bail to 48 suspects arrested since Sunday.

On Monday, the police had registered a first information report (FIR) against those allegedly involved in Sunday’s violence on the complaint of Cantonment police sub-inspector Airaf Gul Awan.

The case was registered under Sections 353 (assault or act to deter a public servant from discharge his duty), 147 (punishment for rioting), 148 (rioting, armed with deadly weapon), 149 (every member of unlawful assembly guilty of offence committed in prosecution of common object), 427 (mischief causing damage amounting to Rs50) and 337H(ii) (punishment for hurt by rash or negligent act) of the Pakistan Penal Code (PPC). The FIR said that the suspects were involved in ransacking and aerial firing while armed with batons, iron rods and weapons. It stated that they had damaged private and government property and obstructed officials from discharging their official duties. The complainant said he and other officials also resorted to aerial firing to disperse the crowd.