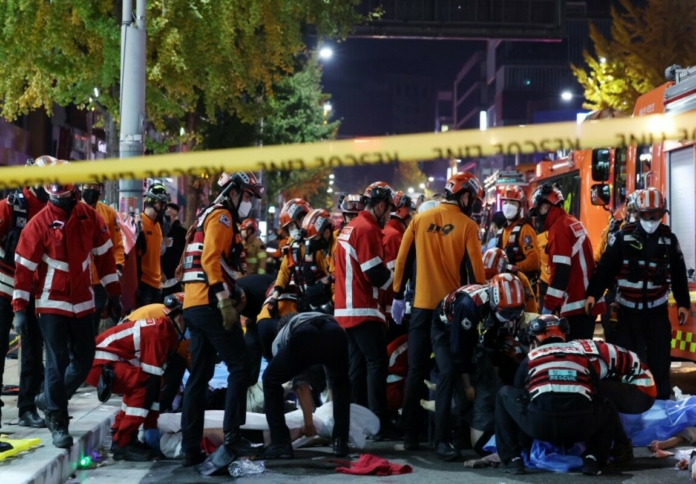 At least 146 people were killed in a stampede when a huge crowd celebrating Halloween crammed into an alley in a nightlife area of the South Korean capital Seoul on Saturday night, emergency officials said.

A further 150 people were injured in the crush in Seoul’s Itaewon district, Choi Sung-beom, head of the Yongsan Fire Station, said in a briefing at the scene.

Many of the injured were in serious condition and receiving emergency treatment, the officials said. The incident took place at about 10:20 p.m. (1320 GMT).

Witnesses described chaotic scenes moments before the stampede, with the police on hand in anticipation of the Halloween event at times having trouble maintaining control of the crowds. Social media footage showed hundreds of people packed in the narrow, sloped alley crushed and immobile as emergency officials and police tried to pull them to free. Other footage showed chaotic scenes of fire officials and citizens treating dozens of people who appeared to be unconscious.

A Reuters witness said a make-shift morgue was set up in a building adjacent to the scene. About four dozen bodies were carried out later on wheeled stretchers and moved to a government facility to identify the victims, according to the witness.

It was the first Halloween event in three years after the country lifted COVID restrictions and social distancing. Some witnesses described the crowd becoming increasingly unruly and agitated as the evening deepened. agencies