Netizens recall Murtaza Bhutto as â€˜revolutionary leaderâ€™, wonder who killed him if all accused in assassination were acquitted in 2009 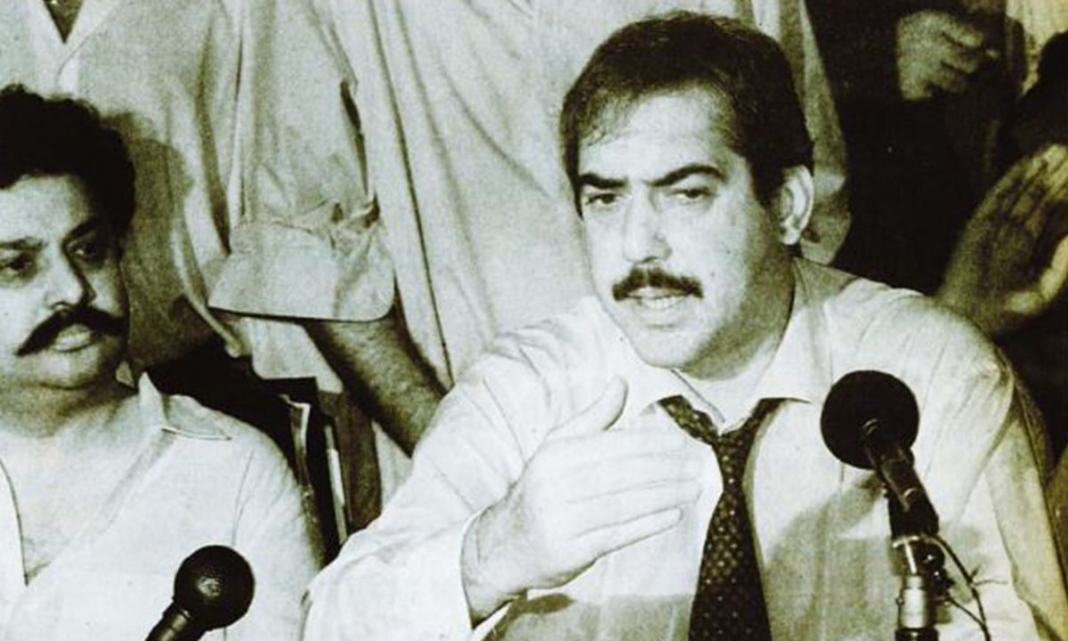 Today marks the 25th death anniversary of politician Mir Ghulam Murtaza Bhutto and social media users have questioned why those who assassinated him in a police encounter, have yet to be brought to justice.

The Pakistan Peoples Party (PPP) in a tweet paid tribute to Bhutto, the son of former prime minister Zulfiqar Ali Bhutto who was sentenced to death under General Zia-ul-Haqâ€™s dictatorship in 1979.

Murtaza Bhuttoâ€™s nephew, PPP Chairman Bilawal Bhutto-Zardari, also released a statement on the day and said that his uncle was the target of a heinous conspiracy, which sought to target one Bhutto by killing another. He recalled that the country fell to dictatorship after his grandfatherâ€™s demise and Murtaza rejected that authoritarianism. Bilawal said that Murtaza, like others in the Bhutto family, struggled for the rights of the people and would always be remembered for his efforts towards democracy.

Murtaza Bhuttoâ€™s son, Zulfiqar Ali Bhutto Jr, stated in an Instagram post today that his father was killed by police on this day in 1996 along with his six companions. He added, â€œTwenty five years on, Fatima Bhutto and I have grown with a father who we visit only in our dreams and in our every heart beat.â€

The slain politician was the founder of Al-Zulfiqar, a leftist militant group formed in 1979. The group was formed to avenge his fatherâ€™s death.

Murtazaâ€™s political vision stood in stark contrast to his sister, Benazir Bhutto who served as the only female prime minister in the country twice. Murtaza disagreed with Benazir and her husband and former president Asif Ali Zardari on the direction PPP took since their fatherâ€™s demise. Murtaza reportedly wanted Zardari at a distance from PPP politics but Benazir sided with her husband, which caused the gap between the siblings to widen. Zardari was also detained in connection with Murtaza’s assassination but was later released after no evidence of his involvement was found.

Murtaza was killed in a police encounter outside his home in Karachi on September 20, 1996. Details of his death were captured by his daughter Fatima Bhutto in her book â€˜Songs of Blood and Swordâ€™. Fatima has long blamed her aunt Benazir and Zardari for orchestrating Murtazaâ€™s murder. Fatima wrote that there was an eerily high number of policemen present along the roads when her fatherâ€™s security detail escorted him home. She narrated that the police fired at Murtazaâ€™s car unprovoked, killing one guard after the other who tried to protect her father.

Fatima also alleged that her father was alive when the police claimed they were taking him to the hospital but shot him in the jaw to see the assassination through. Fatima claimed one of Murtazaâ€™s associates, Ali Asghar, told her that during the ambush her father blamed Zardari and then Sindh Chief Minister Abdullah Shah for the attack.

The police meanwhile maintained they had reached Murtazaâ€™s destination to arrest him but politicianâ€™s guards attacked them first. Fatima noted in her book that the arrest warrant has still not been furbished as evidence in front of her family. To date, Murtazaâ€™s death is shrouded in mystery as the 20 police officers and six members of the Bhutto family who were arrested in connection to his death, were acquitted by a court in 2009.

Journalist Mazhar Abbas tweeted on the matter and wondered who killed Murtaza if all those charged by authorities were declared innocent.

After 25 years assassination of Mir Murtaza Bhutto grandson of Zulfiqar Ali Bhutto remain unresolved till this day. If all those tried in the case acquitted the unanswered question is who killed him, who ordered the killing and why they were not arrested and tried?

Political activist Ali Trimzi said that there was still no justice for the Bhutto family even though Murtaza led a long struggle for justice till his last breath.

No Justice For Bhutto Family:
Shaheed Mir Murtaza Bhutto had a hope in Supreme Court that his father will be given justice. He led the struggle for justice, fought for it till last drop of blood, but no justice. We lost him 25 years ago 20 September 1996. pic.twitter.com/aB4iyAQ68j

Murtaza Bhutto was renowned as a vociferous critic of Zia ul Haqâ€™s military dictatorship. Many on social media remembered him for his commitment to democracy. Journalist Ovais Tohid sorrowfully recalled he had attended Murtazaâ€™s press conference just hours before he died. Tohid remembered Murtaza fondly as a â€˜romantic revolutionary leaderâ€™.

The killing of Murtaza Bhutto was a cold blooded murder,a part of conspiracy. I witnessed those tragic& painful moments on that dreadful evening.
A few hours before, I attended his fiery press conference at 70 Clifton.
Unforgettable.
Murtaza was a romantic revolutionary leader. https://t.co/3So0SirGxT

Activist Bashir Nichari also recalled Murtaza as a â€˜revolutionary leaderâ€™ who lived on in his heart.

Public discourse around Murtazaâ€™s death demonstrated the fractured nature of the Bhutto family. Benazirâ€™s car was pelted with stones by PPP workers when she reached his funeral as many blamed her for Murtazaâ€™s death. The former PPP leader, however, appeared to be deeply saddened and said that in losing her brother she had â€˜lost her backboneâ€™.