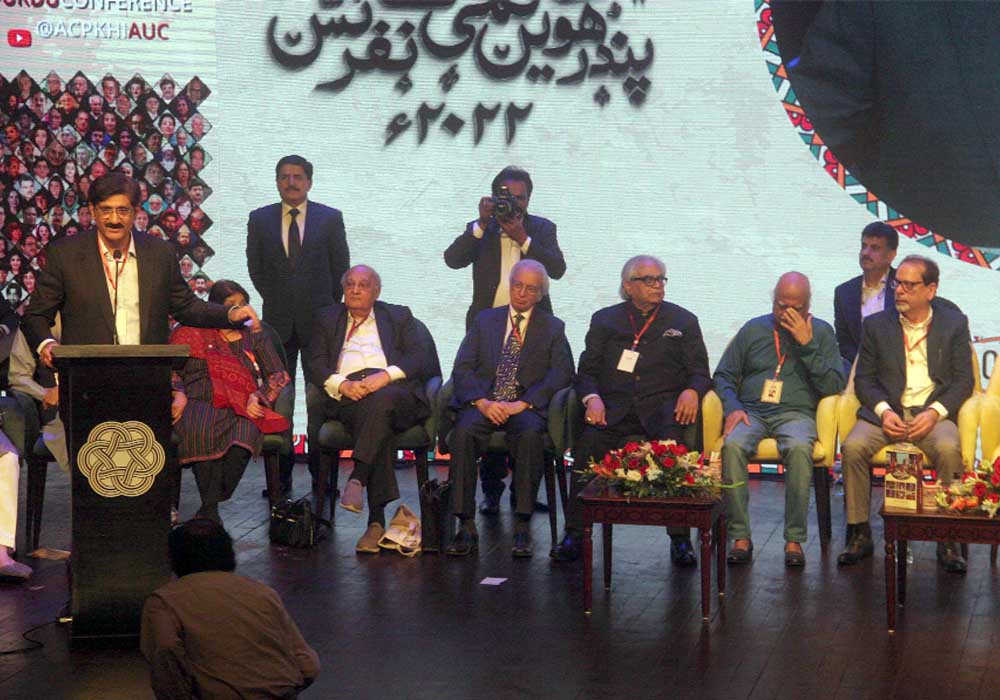 The first Urdu conference was held in 2008, after which it is being held continuously and is progressing gradually.

While hundreds of intellectuals, writers, poets and foreign delegates are participating in this conference, there will be a total of 46 sessions in the conference.

Speaking on the occasion, the chief minister said appreciated the president and officials of the ACP for organizing the event.

Sindh Minister of Culture and Education Syed Sardar Shah said that ACP President Ahmed Shah has made the Arts Council a true cultural center of Pakistan where the art and culture of Pakistan has been revived.

He said that for the first time in Sindh, teachers were being appointed for the promotion of music and arts in government schools.

Zahra Naigh said Pakistan is suffering from various problems these days, but the common man cannot understand these problems. Holding the Urdu conference in the midst of rising inflation is a brave act, she said.

Ahmed Shah said that neither atomic bomb nor any weapon is greater than culture.

He said that the upcoming Pakistan Literature Festival will be held in Gwadar, Lahore, Islamabad, Muzaffarabad, Peshawar, Gilgit-Baltistan, USA, Canada and other countries as well. He said that this province leads the country in terms of culture.

The ACP Karachi has built a cultural center in District Central with the support of the Sindh government.

Dr Alex Blaine from Britain said that he feels proud of being part of the Urdu conference. Different languages are spoken all over the world and language is the best medium of communication, he said.

He was addressing a press conference at his office.

He said that President Dr Arif Alvi has agreed to attend the conference as the chief guest at the opening ceremony of the conference scheduled for December 5 at the Sindh Governor’s House.

Speaking on the occasion, Dr Rizwana said the objective of the conference is to improve the relationship between Pakistan and Poland.

She said that the principal objective of the event was to bring together renowned intellectuals and researchers associated with teaching and research professions at a platform to express their opinions to boost bilateral relations between Pakistan and Poland.

She said that Poland is a country located in an important geographical position, which is considered as the gateway to Europe. Pakistan’s business community can benefit from the European market through Poland, she said.

From this trade point of view, she said, Poland is at the crossroads of Europe, which can give Pakistan access to the European Union along with trade benefits.

This conference is being jointly organized by FUUAST, University of Poland and Higher Education Commission of Pakistan along with other partners, including IBA Area Study Centre for Europe (ASCE).