Culprits are reportedly charging Rs3,000 on payment of Rs25,000 assistance to flood-affected people under BIS 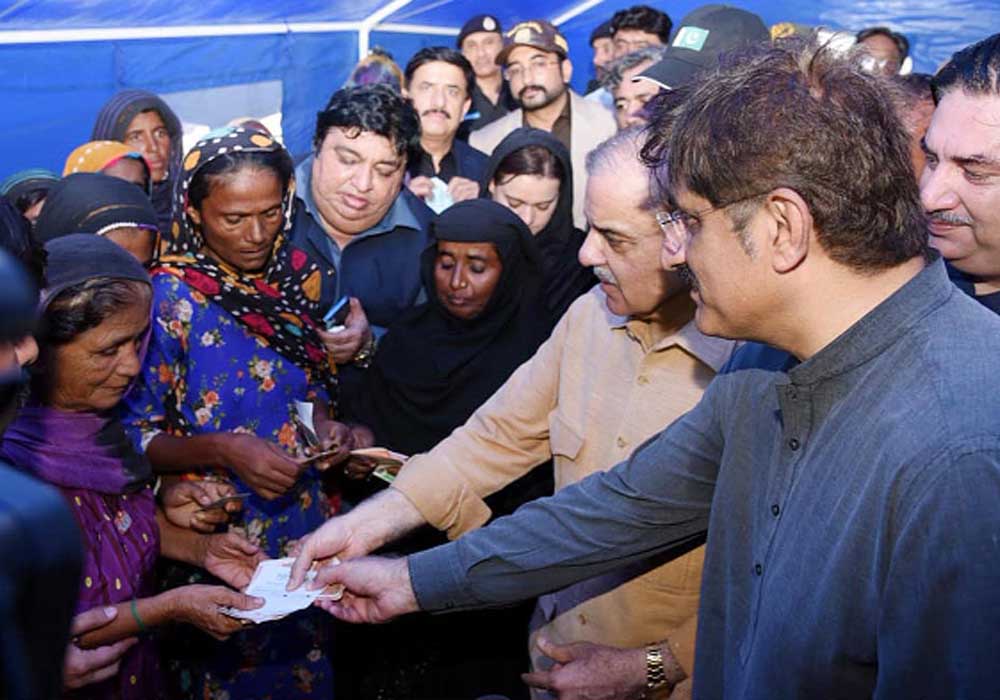 Sindh Chief Minister Syed Murad Ali on Saturday directed the police to arrest the agents who had been deducting Rs3,000 under the garb of service charges from financial assistance of Rs25,000 being given to the flood-affected people under the Benazir Income Support Programme ( BISP)

“This is unacceptable and uncalled for – I will never tolerate [this],” he said while presiding over a meeting at the DC office to review the damages caused by heavy rains and the relief measures taken by the government.

At the outset of the meeting, the chief minister was told that they were thankful to the government that it has started giving Rs25,000 financial assistance to the flood victims. They complained that the BISP officials or agents involved in cash transfer were deducting Rs3,000 as service charges. At this, the CM expressed displeasure and directed to arrest the persons making deduction from the cash transfers.

“This is quite surprising that our people do not spare even the homeless and displaced from deduction,” he said, and directed the DIG of Mirpur Khas to arrest them and report to him.

The CM discussing the issue of restoration of natural waterways said that a study was conducted after the floods of 2011 which revealed that Rs28 billion were required for them. “We are working (on the restoration of old and natural waterways) but funds would be arranged through donor agencies,” he said, and added that Education Minister Syed Sardar Shah had started work in this regard.

The CM said that his government has ordered procurement of 350,000 tents against a need of 1 million tents. “No firm is ready to take order for immediate delivery of tents, therefore brother countries like China, Iran and others are being requested for the purpose,” he said.

Some of the participants of the meeting complained that the flood-affected people from Mirpur Khas, Tando Allahyar, Badin and Thar have settled on the sand dunes of Umerkot. At this, the CM said they were their guests and must be treated decently and respectfully.
Briefing the chief minister, the Mirpur Khas commissioner said that Umerkot had received 570 mm rain, Kunri 644, Samaro 676 and Pithoro 337mm.

The heavy downpour has submerged crops of cotton and others standing over 88,885 acres and the rain had damaged 60,300 houses and perished 1,135 others.

It was disclosed that over 400,000 people have been displaced, of them 4,923 were shifted to 32 relief camps with the facility of regular provision of food and medical aid.

The CM was told that heavy rains have affected out 662 dehs [areas] in Mirpur Khas. Some 12 drains have developed breaches which were plugged timely. The rain has damaged 605.62km roads, 83 culverts and two bridges.

Murad told the elected representatives present in the meeting that he has informed Prime Minister Shehbaz Sharif that 308mm more rainfall had been recorded than the normal rainfall. He added that in August alone, the province had received 784 per cent more rain than the average rainfall.

He said that 23 districts and their 101 talukas had been declared calamity-hit areas. He said he had told the prime minister that the initial estimates of losses had been made at Rs550 billion.

According to the CM, 1.5 million houses have collapsed, 9,197 cattle perished, crops on 2,845,046 acres submerged and 570 roads damaged. He said that the damages caused to the road network of Karachi would cost Rs50 billion to repair. The chief minister assured the people, particularly the affected population, that they would be looked after properly.