CM decides to dispose of rainwater in Matiari, Nawabshah, and Sanghar into Rohri Canal 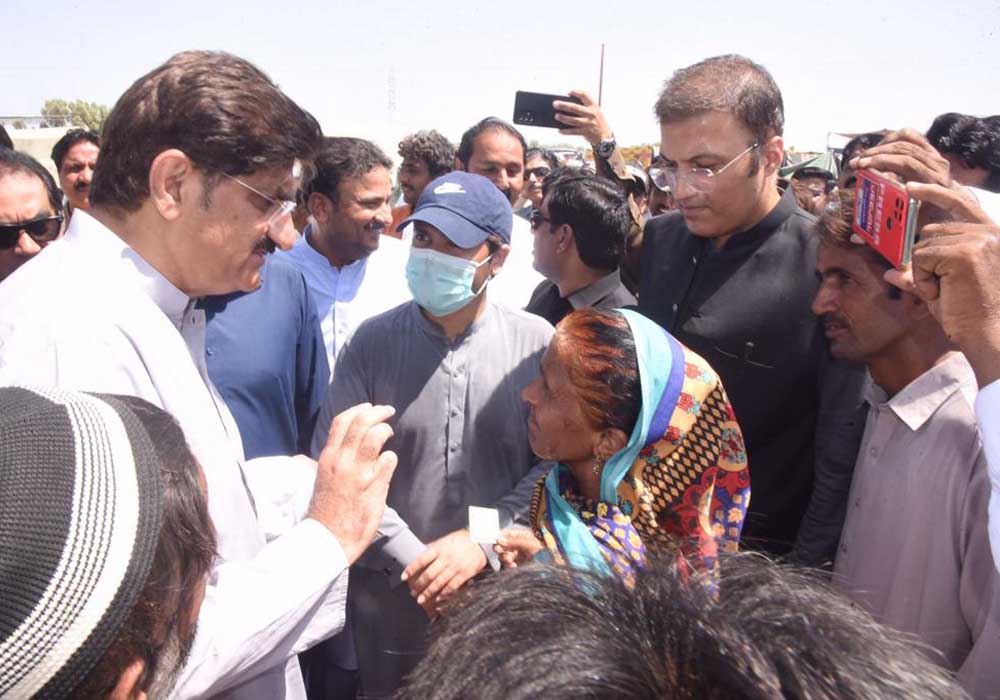 Sindh Chief Minister Syed Murad Ali Shah on his last leg visit to 11 districts of three divisions within three days decided to dispose of rainwater in Matiari, Nawabshah, and Sanghar districts into Rohri Canal for which Markh Wah and other drains would be used.

The chief minister at Rohri Canal held a meeting with Irrigation Minister Jam Khan Shoro, Revenue Minister Makhdoom Mahboob Zaman and irrigation experts at Khor Wah, and decided that the water inundating more than 100 small and big villages of four union councils of New Saeedabad would be disposed off through Markh Wah/distributary, but for that purpose a small channel from Khor Wah to Rohri Canal would be burrowed to connect them.

Murad directed Makhdoom Mahboob to monitor the excavation of the new channel and ensure its completion within two to three days so that disposal of the water could be started.

The meeting also pointed out that the water pouring down from Udero Lal, Jhando Mari and from other areas of Sanghar could also be disposed of through the Markh Wah. “I have visited Chandan drain passing through the National Highway in the areas of Matiari which was flowing at its dead level. I think it is choked somewhere; otherwise it could carry rainwater from the upper side of Matiari to Indus River,” he said, and directed irrigation engineers to inspect the drain and unblock it for clearing the villages of floodwater.

When the meeting started at the site of Khor Wah and Irrigation Minister Jam Khan Shoro started briefing the chief minister through an irrigational map, locals of the areas living in the tents gathered around there. The people told the chief minister that they were receiving relief goods, including ration bags, and living peacefully in the tents but “we are not happy here even if we are provided food”. “We want to return to our ancestral villages to lead the life in our own way,” they implored.

The chief minister told them that his visit was purely based on exploring a way out to dispose of floodwater from the villages. “I understand your position. You and your women cannot live along the roads and would rather feel comfortable in the katcha houses, along with your cattle and agricultural belonging,” he said, and assured them that they would be sent back to their homes once the water was disposed of.

The chief minister, after understating the location and utility of the Markh Wah, drove to Rohri Canal where he got another briefing from the engineers concerned and finally decided to start the disposal of rainwater to clear the villages and other built-up areas.

On the way to Naushahro Feroze, the chief minister visited a tent city at Malook Khaskheli village of Matiari district.

He also visited the under construction Phul Basic Health Unit building where the health facility was functional. He directed the Works Department to complete the work within the next two months.

He also visited a tent city at the Atal Bohiyo Bus Stop and inspected the distribution of freshly cooked food, including chapati and curry.