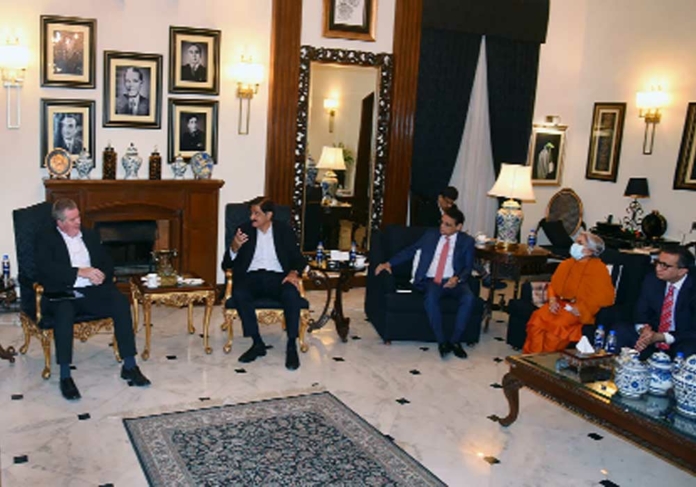 Executive Director Dr. Michael told the chief minister that the WHO Mission has taken an aerial view of the flooded area and visited high calamity-hit districts in the province to assess the needs on the ground. The chief minister said that the unprecedented rains and hill torrents inundated 18.8 percent or 12,541.6 square km of the total populated areas of the province, as a result, 7.2 million people were displaced. He added that in 2,782 relief camps set up all over the province around 400,000 people were accommodated.

Dr. Rayan and Dr. Mahipala commended the Sindh government’s efforts for rescue and relief services and put emphasis on more coordinated efforts between partners and local NGOs with Health and district management.

The chief minister said that 410 medical camps, including mobile [camps], have been established with a workforce of 600 doctors, 1125 paramedics, and 350 volunteers. The chief minister and the WHO Mission discussed the scale of devastation and magnitude of the emerging health and nutrition crisis. The meeting decided to take concrete measures for the health protection of the flood victims, provision of Shelter, food, safe drinking water, and reach each and every one in need.

Talking about malaria Shah said that the provincial health department screened 20,623 patients on Sept 28, of them 2,942 Malaria cases were detected, including 1960 in Hyderabad division, 1,375 Larkana, 989 Mirpurkhas, 354 Sukkur, 148 Shaheed Benazirabad, 116 Karachi. He added that 3,869 patients were screened, of them, 6603 were detected as Dengue positive. At this, Health Minister Dr. Azra said that 9,172 cases of dengue have been detected in 2022.

Minister Health Dr Azra talking about maternal health said that 9,829 pregnant women were living in the camps, of them, 9,010 have been given dietary supplements, 7897 women received Tetanus Toxoids (TT) and Tetanus-Diphtheria (TD) 3,756 deliveries have been conducted. WHO Dr. Rayan added that the threat of an increase in mortality was due to water and vector-borne disease outbreaks. Talking about malnutrition and pregnant ladies, the delegates discussed immediate actions

The WHO extended full cooperation in establishing coordination and support on the provision of safe drinking water, robust disease Surveillance and response system, strengthening health services, provision of medicines and supplies, and addressing malnutrition and access to health services The WHO has established four Emergency operations centres in Sindh to respond to flood emergencies and to work closely with the Department of Health and District Administration

WHO is supporting the Sindh government in the establishment of 50 Nutrition Stabilization Centers, strengthening the health system through the provision of essential health services and refurbishment/ renovation of health facilities. WHO had handed over 12 boats and 27 vehicles for outreach health services, provision of Aqua Tablets, and water purification plants in Dadu and Kambar-Shahdadkot.