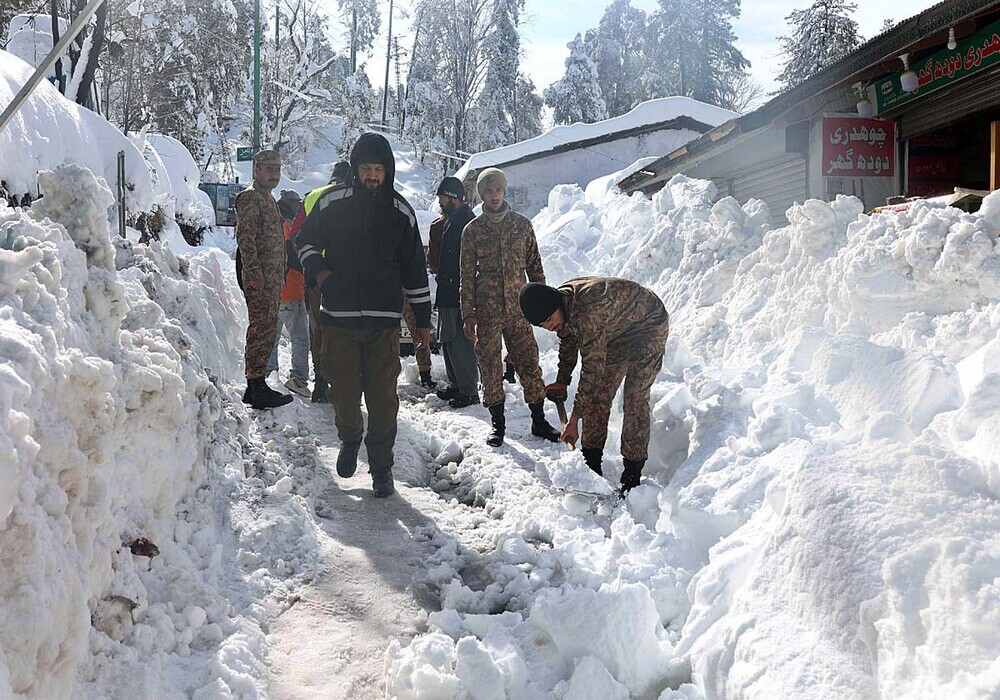 Operation to provide relief to and evacuate stranded tourists in Murree continued on Sunday, as officials tried to clear snow from roads in and around the hill station a day after 22 people, including women and children, died in their vehicles trapped by heavy snowfall.

In a tweet, Special Assistant to the Prime Minister for Political Communication Dr Shahbaz Gill said that all major arteries to Murree had been cleared for traffic. “Around 600 to 700 cars were evacuated from the area last night,” he said, adding that Rawalpindi police, the district administration and Pakistan Army soldiers worked throughout the night. “Police officials are present on the roads leading to Murree from Islamabad and Rawalpindi. The roads will remain closed for today,” he said.

Providing an update on the rescue operation, the Inter-Services Public Relations (ISPR) said “all main communication arteries have been cleared for all types of move[ment].”

The Kuldana-Barian road has also been cleared, according to the statement, which said that after the clearance of main roads, army engineers were now focusing on road links. “Relief camps/medical facilities are fully operating and army transport is plying for moving of stranded tourists to Rawalpindi/Islamabad,” it added.

Meanwhile, Punjab Chief Minister (CM) Usman Buzdar ordered a high-level inquiry into the tragic incident and formed a committee headed by the Punjab additional chief secretary (home), tasking it to submit its report within seven days.

The CM who issued the directives while chairing a meeting in Gharial, said indiscriminate action would be taken against those responsible for negligence in light of the report of the inquiry committee.

Buzdar also announced financial assistance of Rs17.6 million for the heirs of those who lost their lives in the blizzard. He told the meeting that the financial aid was not a cure for grief “but we share the pain of the bereaved families”.

The meeting also decided that the hill station would be elevated to the status of a district.

Meanwhile, in view of the emergency situation, the Pakistan Telecommunication Authority (PTA) announced that people present in Murree and Galiyat areas with no mobile balance had immediately been provided with free on-net calling facility.

According to a statement issued by the PTA, cellular mobile operators extended free calling facility on their own networks to users with zero balance stranded in Galyat, on the authority’s directions.

“[The] PTA has also directed all telecom operators to ensure uninterrupted services to users and keep enough backup arrangements in case of power outages,” it said.

“(I) never saw such a huge snowstorm in my life. There were strong winds, uprooted trees, avalanches. People around were terrified, each having his or her own account of suffering.”

Authorities have also promised an investigation into the incident.

“Our first priority was rescue, which is ongoing, then relief,” Hasaan Khawar, spokesman for the Punjab government, said in a video on his Twitter page.

“Then a high-level inquiry will be launched and if there is any kind of negligence, then action will be taken against all those involved,” he added.

Many tourists complained on social media on Sunday that Murree hoteliers and guest house owners had compounded the problem by price gouging, prompting stranded people to spend the night in their cars rather than pay for a room. “Things would have been different if local people and hotels were cooperative, but the reputation and conduct of the local people of Murree are very bad in this respect,” a senior government official told AFP on the condition of anonymity.

There were also reports, however, of locals throwing open their homes to stranded tourists and offering food and blankets to those caught in the open.

Meanwhile, Interior Minister Sheikh Rashid Ahmed on Sunday said a ban on travel to Murree and Galyat would continue for another 24 hours, even as the authorities removed snow from all the major roads to normalise traffic at the hill station.

In a statement, the interior minister said that only the citizens of Murree and adjacent areas would be allowed to travel on these roads while showing their national identity cards.

Also, the Punjab Police said in a statement that its rescue and relief operation was underway in Murree. It said that hundreds of citizens had been provided timely assistance since Saturday night. The police spokesperson said that the Punjab chief minister and inspector general had been supervising the rescue operation. He said that due to heavy snowfall on major highways of Murree, 20 to 25 large trees fell and blocked the roads. However, all the tourists were rescued before nightfall and taken to safer places, he said.  He added that more than 500 families were rescued and brought to safe places since Saturday night.