Says long march to continue at all costs 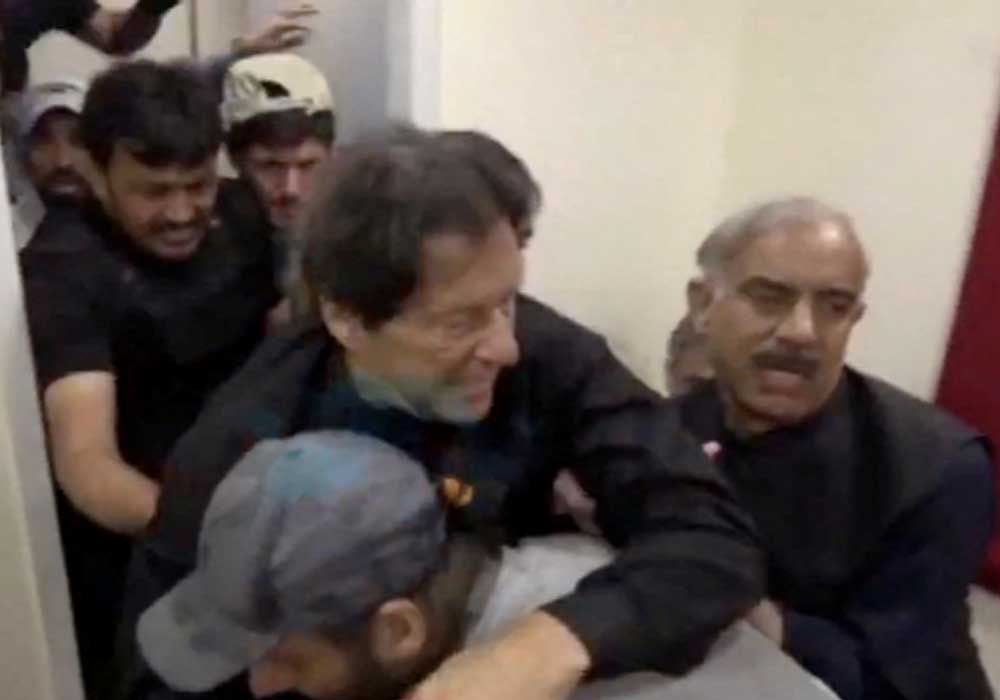 Pakistan Tehreek-e-Insaf (PTI) Chairman Imran Khan and some party members were injured while a PTI activist lost his life when a gunmen fired at Imran Khan’s container during his “Azadi March” in Wazirabad, on Thursday.

According to the police, the gunman fired at Imran Khan’s container near Allah Wala Chowk, Wazirabad, when the march was on its way to Islamabad, injuring Imran Khan and six PTI members, including Senator Faisal Javed, Umar Dar, Ahmad Chatha and others, besides killing one, Moazam. A spokesperson of Punjab Police said that taking notice of the incident, Inspector General of Police (IGP) Faisal Shahkar ordered Counter-Terrorism Department, Regional Police Officer and District Police Officer Gujrat to complete investigation of the incident through special investigation teams and bring out the real facts.

Talking to the media, Advisor to Chief Minister Punjab on Home and Information Omer Sarfraz Cheema said that after the incident Imran Khan was shifted to hospital, where he was undergoing medical treatment. To a question, he said that foolproof security arrangements including layer system were in place to provide security to the PTI’s long march.

However, addressing the media at Shaukat Khanum Hospital, Doctor Faisal Sultan said the PTI chairman was admitted to the hospital for medical treatment after getting injured in the attack and that his condition was stable as his blood pressure and other vital signs were normal. He said that Imran Khan went through emergency evaluation which included x-rays and scans. Some fragments of bullet were in his legs and ‘tibia’ bone of one leg was slightly chipped from right side. Faisal Sultan said that Imran Khan had been taken to operation theater where his detailed evaluation would be carried out.

Chief Minister Punjab Chaudhry Parvez Elahi in his special video message said that he inquired after Imran Khan in the Shaukat Khanum Hospital and he was feeling much better. Elahi directed the Inspector General of Police to constitute a high level JIT and added that the Counter-Terrorism Department will be included in it so that the motives behind the incident could be found. The CM stated that apparently it looks that the attacker is not alone and are there were two other.

Meanwhile, PTI Secretary-General Asad Umar claimed that Imran Khan suspects three people – Prime Minister Shehbaz Sharif, Interior Minister Rana Sanaullah, and a senior military officer – to be behind the assassination attempt on him. Quoting the PTI chairman, Umar demanded that all three people be removed from their offices. The PTI leader added that Khan has warned that if these officials are not removed from their officers, then the party would hold countrywide protests as Pakistan cannot run in this manner anymore. “If the demands are not met, then all the party’s workers are awaiting Khan’s call, and when he does give that call, then protests will take place across the country.”

Umar said that he spoke to the doctors – including Dr Faisal Sultan – about Khan’s situation and they have informed him that his condition is stable and out of danger. “The doctors said that bullets hit him, and at this time, it is unclear as to how many they were,” he added. Meanwhile, Imran Khan said that he is not the one who would frightened with such incidents. In his message after being injured in attack, Imran Khan said that the long march will reach Islamabad at all cost. “I said that I will not bow down,” Imran Khan said, adding that he will continue to fight.