National Hockey Stadium AstroTurf ripped off ahead of PTI’s rally

Sports minister says AstroTurf will be shifted to Sargodha stadium 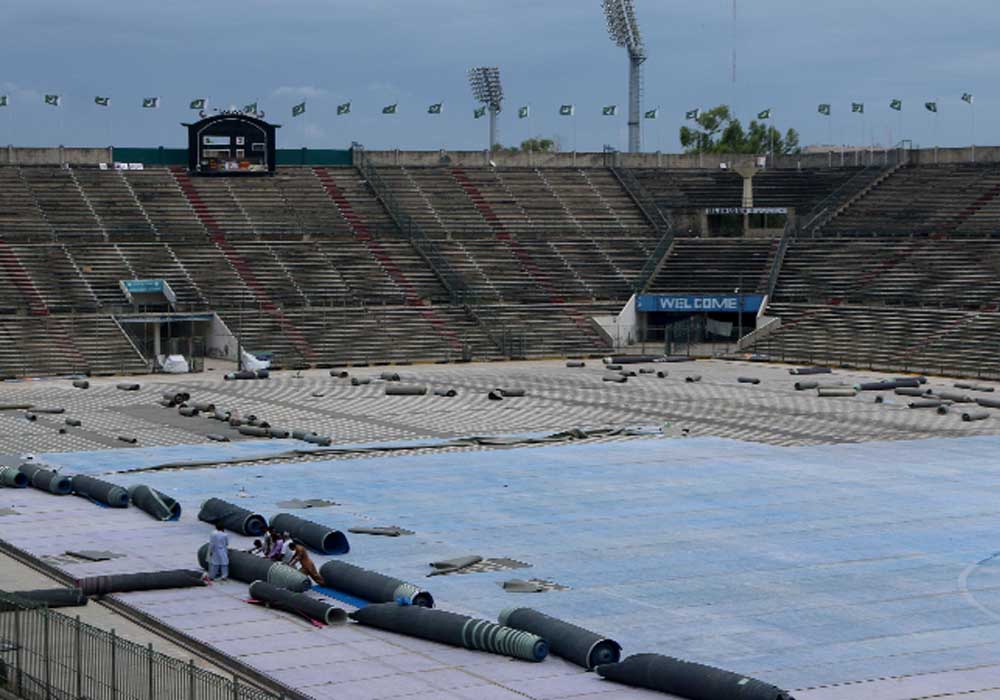 The preparations for PTI’s public meeting are in full swing at National Hockey Stadium where Imran Khan is scheduled to address a huge gathering tomorrow (Saturday).

On Thursday, central leaders of PTI including Iftikhar Durrani, Information Secretary Andleeb Abbas and Lahore’s President Sheikh Imtiaz visited the venue to review the arrangements. Talking to media, Andleeb Abbas said that PTI plans to hold its jalsa at this venue keeping in view its huge space. “It is the largest stadium of Asia and therefore we selected this to cater our people who come in large numbers with families,” she said.

Meanwhile, Provincial Health Minister and President of Pakistan Tehreek-e-Insaf Central Punjab Dr Yasmin Rashid chaired the Women Wing meeting, in which Nosheen Hamid, Rukhsana Naveed, Nadira Umar, Sadiqa Apa, Rubina Shaheen, Tanzeela Imran, Shabnam Jahangir, Rifat Saud and Dr. Ambreen participated. During the meeting, Dr Yasmin Rashid reviewed the strategy of the Women Wing regarding Imran Khan’s participation in the Haqiqi Azadi Jalsa on August 13. “There will be large representation of women from all over Punjab in the Haqiqi Azadi Jalsa on August 13 where Imran Khan will address a huge gathering,” she said, adding that Pakistan Tehreek-e-Insaf is struggling for real freedom in the country and Imran Khan has tried to make the institutions of Pakistan independent and strong. “We will make history in the National Hockey Stadium by celebrating true freedom,” she said.

Earlier in the day, the management of the National Hockey Stadium ripped off the AstroTurf while preparing the venue for PTI’s power show. According to the Punjab government, the Astroturf, removed from Lahore stadium, will now be placed in the Sargodha Hockey Stadium. Lahore’s historic national hockey stadium will get the Federation International Hockey FIH-approved new AstroTurf worth Rs15 million by December this year.

After criticism on social media, Punjab Sports Minister Malik Taimur Masood said that the previous government decided to shift the turf of Lahore ground to Sargodha and it has nothing to do with the PTI’s public rally. Meanwhile, Special Assistant to the Prime Minister Atta Tarar wrote letters to Chief Secretary Punjab, Commissioner Lahore and DG Punjab Sports Board over the removal of AstroTurf for PTI’s power show.

The Pakistan People’s Party central Punjab chapter on Thursday condemned the removal of AstroTurf from the Lahore’s Hockey Stadium for the upcoming power show of the Pakistan Tehreek-e-Insaf (PTI.

In a statement, PPP Punjab leaders, including Information Secretary Shehzad Saeed Cheema and vice president sports wing Mian Attique said that it was unfortunate to remove the artificial turf for a political gathering.  They alleged that Imran Khan was damaging the national game of hockey after destroying cricket in the country. They appealed to the apex court to take suo motu action to save the precious ground and the national game.