Nawaz for national strategy to â€˜put our house in orderâ€™ 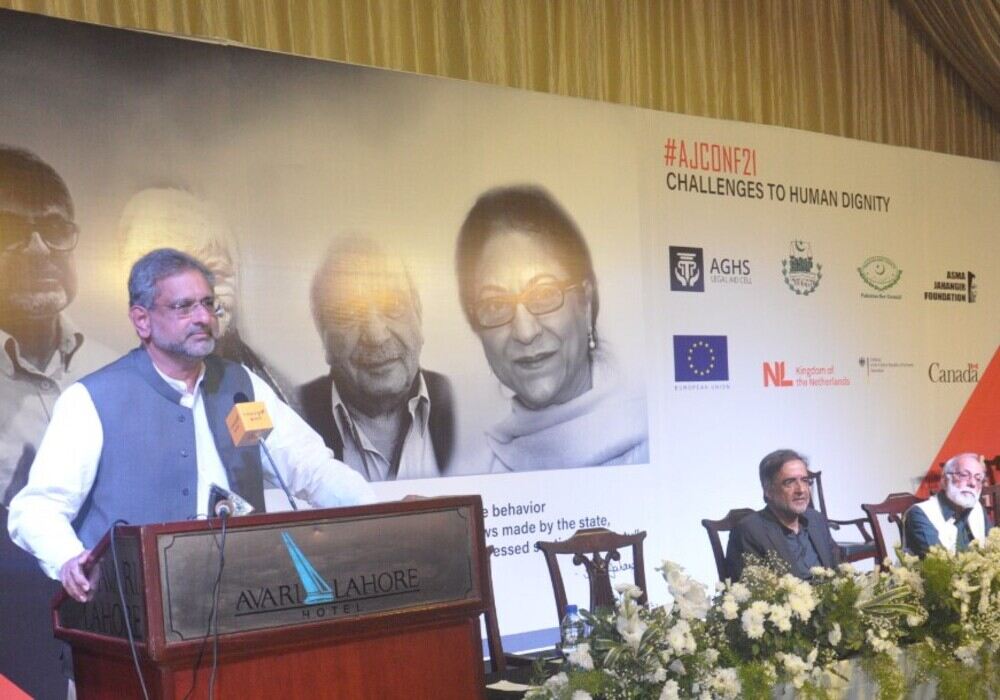 Former prime minister and Pakistan Muslim League-Nawaz (PML-N) supremo Nawaz Sharif on Sunday said that there was a dire need for agreeing on a national strategy based on rule of law and supremacy of the constitution, and reiterated the need to ‘put our house in order’.

He was addressing the concluding session of Asma Jahangir Conference held at a hotel in Lahore. Earlier, Sharif was scheduled to address the conference through video link but he later delivered an audio speech because of “some technical issues”.

Munizae Jahangir, the organiser of the event, said that the lines were cut by some ‘hidden’ forces and the Internet was suspended by placing jammers just few moments before Sharif’s speech.

Sharif said that Pakistan was passing through a critical juncture and the whole nation was raising questions over repeated anti-democratic tactics used in the country. He said ‘we have seen state within the state’ here in Pakistan, while factories of political engineering were also operating in the country. “The governments are made and toppled here. It is a country where sit-ins are arranged to destabilise an elected government,” he said. “It is a country where judges are shown the doors when they try to speak the truth. The judges are forced to get the judgements of their own choices. It is a country where dictators used to say openly that the constitution is just a piece of trash.”

Sharif went on to say that the only person sacred was the one who followed the constitution; otherwise he was a traitor. “The time has come that we all gather on one platform to bring this country out of crises,” he said, urging the participants to start implementing the recommendations of the Asma Jahangir Conference. “Let’s start our struggle to save this country; otherwise history will not forgive us.”

He once again hit out at the military establishment and criticised interference in judicial and government affairs that he claimed had led to Pakistan’s ‘downfall’.

“The most dangerous aspect is the deepening disappointment and severe helplessness [among the people],” he said. “History is witness that when nations descend into the quagmire of despair, questions start to be raised about that nation’s survival.”

He said the 220 million people of Pakistan were demanding answers to some fundamental questions and until they received those, the country’s state of affairs would not improve.

“If the tongue of the questioner is pulled, this does not resolve problems,” he added, likening the allegedly deliberate internet disruption during his speech to ‘pulling [our] tongue’.

“Will this solve problems? And then picking up those asking questions and disappearing them, will that end the questions? Unfortunately, the current era has proven to be the blackest era for freedom of speech and human rights.”

Sharif said regional and international circumstances had accentuated Pakistan’s need to ‘correct ourselves’.

The conference organisers condemned the alleged ‘muzzling’ of Sharif’s speech, after internet services at the venue were reportedly suspended soon after his address began.

Sharif began his speech by paying tribute to the late celebrated lawyer and human rights activist Asma Jahangir, but the live stream abruptly stopped shortly after.

In a statement issued after the event, the organisers regretted what they termed ‘the state’s highhandedness’ for allegedly blocking Sharif’s speech.

“The organisers of Asma Jahangir Conference 2021, which include the Supreme Court Bar Association, Pakistan Bar Council, and the AGHS, strongly condemn this act and consider it an onslaught on the freedom of expression.”

After the video call was cut off, the organisers arranged for a telephonic address by Sharif, according to their statement.

It quoted Munizae as saying: “We believe in freedom of expression, that is why this non-partisan platform is open to everyone and we condemn the muzzling of the closing session where Mian Nawaz Sharif was going to make an address.”

Senior Pakistan Peoples Party (PPP) leader Farhatullah Babar also condemned the tactics used to silence Sharif. “We all know who did it today, it is really unfortunate,” he said while speaking in the session. Pakistan Federal Union of Journalists Secretary General Nasir Zaidi said the media in Pakistan was facing its darkest time where censorship and curbs were a routine matter. “We have faced three dictatorships with bravery and are ready to fight this government too that is not less than a dictatorship,” Zaidi said.

Earlier, former prime minister Shahid Khaqan Abbasi while addressing the conference lashed out at the National Accountability Bureau (NAB) and branded it a ‘tool to convert people into turncoats’.

The PML-N leader gave a speech detailing his grievances against the watchdog and held it responsible for a series of ailments plaguing the country.