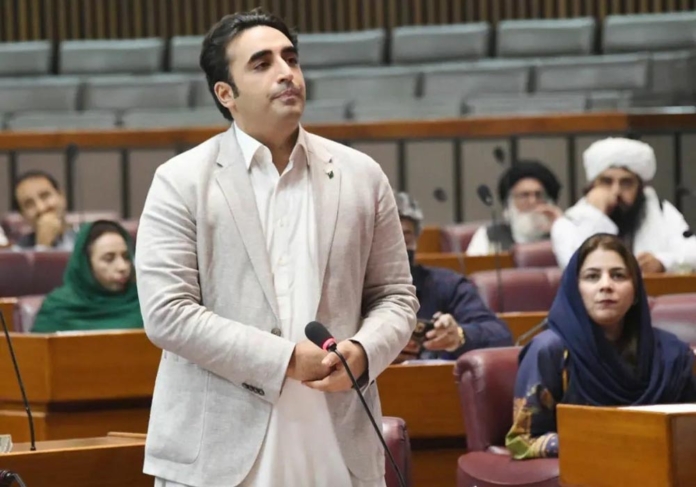 Making a thinly veiled reference to the previous Pakistan Tehreek-e-Insaf (PTI) government, Foreign Minister Bilawal Bhutto Zardari said those who had benefitted from rigged polls earlier were now complaining in the House against the ‘neutrality’ of institutions.

“They know undemocratic parties like theirs would otherwise not be given any leverage,” the Pakistan People’s Party (PPP) chairman said while addressing the National Assembly on Wednesday.

“This is why today they are running a movement for our institutions to play a controversial role instead of a neutral and constitutional one,” he added.

Criticising the assembly proceedings during the tenure of the PTI, Bilawal said the opposition in the NA, although limited in number, was now getting the opportunity to talk and raise their concerns about issues like the Sindh local government elections. However, he added that it would have been more “appropriate” to discuss the issue in the Sindh Assembly.

The minister said the PPP had been struggling for democracy, fair and free elections, and economic issues for three generations.

He stated that the party had “bravely faced every tyrant”, citing examples of “violence” under leaders such as Ziaul Haq and Pervez Musharraf. “The PPP has had the opportunity to govern despite rigging. In this country, rigging has always taken place against the PPP to stop the party of Zulfikar Ali Bhutto and Benazir Bhutto,” he added.

He claimed that like PTI Chairman Imran Khan, there were parties, politicians and “puppets” in Sindh who helped dictatorial rule come forth in the hopes that institutions would not be neutral.

“When our institutions started becoming neutral, be it the Election Commission [of Pakistan], the courts or other institutions, these people started panicking. This is because they knew that their bails would be revoked if transparent elections were held and the institutions remained neutral,” he said.

He further said the opposition parties were aware that they came into power through a “rigged” election in 2018.

Calling out a member of the opposition, Bilawal said that he could only contest the elections because PPP leader Abid Bhayo’s brother was imprisoned in Shikarpur. “When we have a level playing field, they will have no place to run,” he said.

The foreign minister further said that the opposition had gathered in the Sindh High Court a day before the provincial polls in order to escape the elections, but that the people could see that only one party – the PPP – was there for the province while others tried to escape.

“Would the people of Sindh vote for those who were trying to run?” he questioned, adding that such parties would create more fuss as the second phase of the elections was in a month. “Free and fair elections will take place only after electoral reforms… there will be a level playing field. The PPP always performs well when there is a level playing field,” he added.

He maintained that rigging should be exposed if it was taking place, and added that the PPP supporters could not be involved in rigging, as it went against their party’s manifesto and leaders.