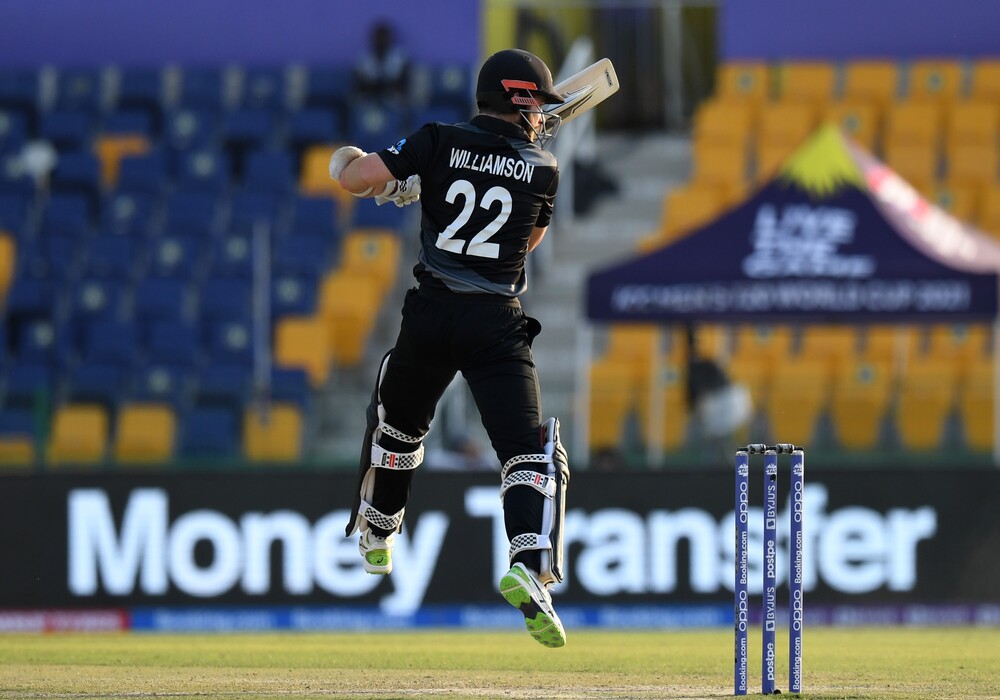 New Zealand reached the Twenty20 World Cup semi-finals with a comfortable eight-wicket win over Afghanistan on Sunday, a result that eliminated star-studded India from the tournament.

Chasing a modest 125, skipper Kane Williamson (40) and Devon Conway (36) put on an unbeaten stand of 68 to drive the team home in 18.1 overs in Abu Dhabi. The Kiwis join Pakistan as the two teams in the semi-finals from Group 2, leaving India’s final match against Namibia on Monday a dead rubber.

England and Australia have already made the semi-finals from Group 1.

The semi-final match-ups will be decided after Pakistan play Scotland in the second match of the day. “It was a strong performance,” said Williamson.

“We know how dangerous this Afghanistan side is. It was good for us to be able to set the tone with the ball, take wickets early and then keep them to below-par total. 150-155 would have been par.” Unless unbeaten Pakistan suffer a shock defeat to Scotland in Sharjah later Sunday, the Kiwis will face England in the semi-finals. Pakistan would take on Australia in the other semi-final.

“There’s another strong challenge coming up. England are a very strong side,” said Williamson. “For us it is important we keep learning and building.” Afghanistan skipper Mohammad Nabi admitted making only 124 was never likely to be enough.

“This was not a decent total,” said Nabi after his team ended the tournament with two wins and three losses.

“Still we tried our best with the ball. We played good cricket in the tournament, and we will take a lot of positives.

“But we need to correct the mistakes we made with the bat.” Left-arm quick Trent Boult returned figures of 3-17 from his four overs and was ably supported by Tim Southee, who took two wickets, to restrict Afghanistan to 124-8.

Najibullah Zadran played a lone hand with his 48-ball 73 to give the Afghanistan total some respectability after they elected to bat first.

New Zealand’s pace bowlers rattled the opposition’s top order with quick strikes as Adam Milne sent back Mohammad Shahzad caught behind for four in his first over. Boult got going from the other end to get Hazratullah Zazai out for two and Southee trapped Rahmanullah Gurbaz lbw for six as Afghanistan slipped to 19-3. Zadran counter-attacked with a handful of boundaries including two off Jimmy Neesham but soon took to defence after losing his partner Gulbadin Naib for 15.

Naib dragged a wide delivery from Kiwi leg-spinner Ish Sodhi onto his stumps. Skipper Mohammad Nabi joined Zadran at the crease as the duo attempted to push the scoring against the spinners and singled out Mitchell Santner for runs.

The left-handed Zadran smashed Santner for two sixes and later got to his 50 in 33 balls. It was his second fifty in this T20 World Cup and sixth overall.

Southee broke the 59-run partnership, seeing off Nabi for 14.

Boult got the key scalp of Zadran with Neesham taking a good diving catch in the deep and the Afghans struggled to get runs in the final overs.

New Zealand remained clinical in their modest chase with Martin Gutptill and Daryl Mitchell mixing their singles and twos with occasional boundaries.

Mujeeb Ur Rahman struck with the wicket of Mitchell, caught behind for 17.

Spin king Rashid Khan then sent back Guptill bowled for 28 to bag his 400th wicket in T20 matches.

But Williamson stood firm with Conway who joined his skipper for a smooth partnership that steered the team home. The left-hand Conway smashed four boundaries and the winning runs in his 32-ball knock.