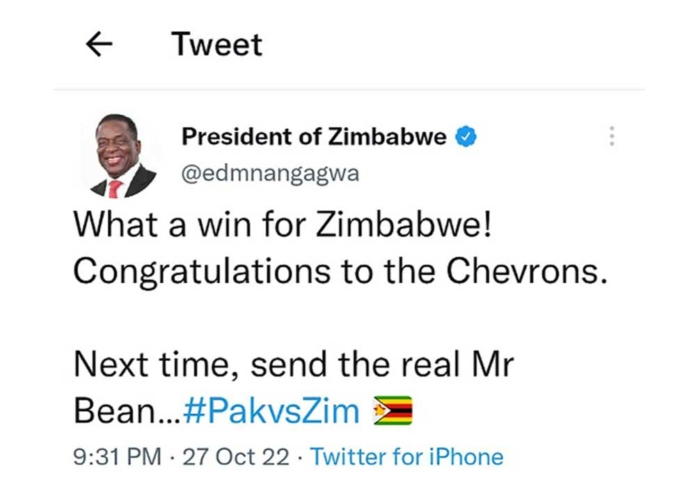 According to the reports, a Zimbabwean named Ngugi Chasura through Twitter expressed his rage by stating, “Just pray for the rains to save you team Pakistan” and claimed that they would “settle the matter,” while simultaneously labelling Pakistanis as “frauds.”

When a fan enquired as to the cause of his rage, he replied, “They gave us Pak Bean instead of Mr. Bean on one of our local events called agriculture show.”

As Zimbabweans we wont forgive you…you once gave us that Fraud Pak Bean instead of Mr Bean Rowan ..we will settle the matter tommorow just pray the rains will save you…#ZIMVSPAK

Following that, Chasura posted a photo of Muhammad Arif, who is well-known for looking like British actor Rowan Atkinson. The actor is renowned throughout the world for his iconic portrayal of Mr. Bean.
“Stealing other people’s cash!” Added Chasura.

Arif was invited to an event in Zimbabwe in 2016, where he attended a comedy night at the Harare International Conference Centre.

Prime Minister Shehbaz Sharif replied to the Zimbabwe President’s mocking Tweet stating that the Pakistan team has a habit of Bouncing Back.

“We may not have the real Mr. Bean, but we have real cricketing spirit. And we Pakistanis have a funny habit of bouncing back Mr. President: Congratulations. Your team played well today.”

We may not have the real Mr Bean, but we have real cricketing spirit .. and we Pakistanis have a funny habit of bouncing back 🙂

Muhammad Arif aka fake Mr.bean also released a video after controversy stating “I love you Zimbabwe.”

Twitterers expressed their thought on the controversy some were in fits finding it funny while some apologized and condemn it.

A user called Pakistan vs. Zimbabwe the “battle of beans.”

Tomorrow’s match will now be called The Battle of The Bean #PAKvZIM pic.twitter.com/Xd8xNAPXyX

A tweeter user demanded an immediate apology from the foreign office.

deeply condemn the Pakistani mr bean controversy with Zimbabwe. expecting an immediate apology & a thorough explanation from our foreign office in this regard. we can not afford new cricket rivalries.

Another one said, “who said Melbourne is a dull city when there Mr bean Grudge cricket match there?”

It's cold, wet and grey here in Melbourne, and we probably won't even have get Aus-Eng on tomorrow.
Meanwhile, there's a Mr Bean grudge match in Perth where it's 22 and sunny.
Who said that city was dull?