No need of deal 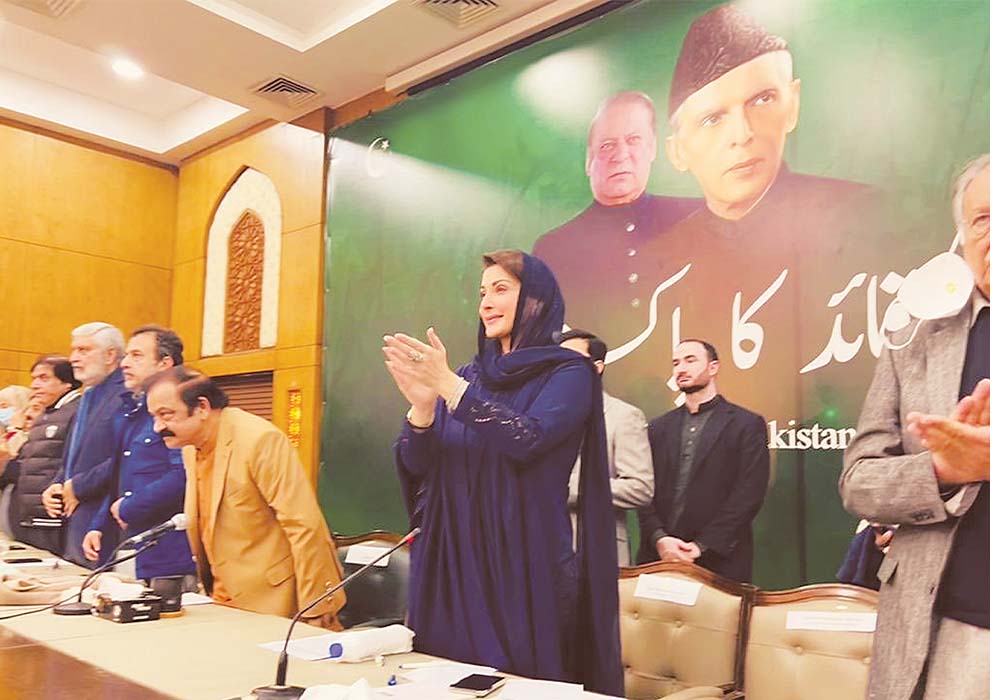 She was talking to the media in Lahore at the party’s secretariat in Model Town after attending a meeting that was also addressed by Nawaz Sharif.

“[Only] those need a deal who don’t have their roots in the masses,” said Maryam without naming anyone.

The statement came a day after Inter-Services Public Relations (ISPR) Director General Major General Babar Iftikhar categorically rejected the impression that there was ‘a deal’ in the works with PML-N supremo Nawaz Sharif.

Flanked by PML-N Punjab President Rana Sanaullah and senior party leader Pervaiz Rasheed, Maryam said that “everything is in the favor of the PML-N and the party doesn’t need any deal with anyone”.

“The results of by-elections went in our favour and the people once again want Nawaz Sharif and Shehbaz Sharif to serve them,” Maryam said, adding, “We only have one demand and that is free and fair elections.”

Speculations about a possible deal between Nawaz Sharif and the “establishment” were being made after the visit of PML-N leader Sardar Ayaz Sadiq to London where he met the party’s supremo. There were rumors that Sadiq went to London as a “messenger” of “someone” to give an important message to PML-N self-exiled leader. “I didn’t talk to Ayaz Sadiq yet; therefore, I am unable to say anything. I’ll be in a position to comment on it after talking to him,” Maryam said.

Earlier, Maryam Nawaz said that Imran Khan had been exposed before the world after the Election Commission of Pakistan’s (ECP) report on foreign funding of the Pakistan Tehreek-e-Insaf (PTI).

She said that startling revelations were made in the report. “As many as 18 accounts were functional out of 26, but only four were declared,” Maryam said, adding that the PTI got funding from Canada, Australia and Europe.

“Corruption, bad governance and prohibited funding have become the brand of Imran Khan,” she alleged while demanding immediate resignation of Imran Khan for “lying” to the nation.

She urged the ECP and the Supreme Court of Pakistan to take action against the premier. “A joint investigation team (JIT) headed by a Supreme Court judge should be constituted to hold hearing on a daily basis. “If Nawaz Sharif can go to Adiala Jail then Imran Khan should also be put behind bars,” she said.

Lauding the ECP on releasing the report, Maryam said that it is now up to the commission to ensure that justice is served and Imran Khan is punished for his corruption.

Regarding the leaked recording of a phone call Maryam had with Pervez Rasheed, she demanded an apology for tapping her phone without her knowledge.

“As a citizen of Pakistan, it was a violation of my rights to tap my personal phone call. Therefore, I am not going to comment on this issue unless I receive an apology,” she added.

To a question, Maryam said that the party would decide on Nawaz Sharif’s return. “Nawaz Sharif did not leave the country as a result of any deal. He solely went to London for treatment because his life was in danger,” she stated.

The PML-N leaders also expressed concern over the State Bank of Pakistan (Amendment) Bill 2021, saying that Pakistan’s economic sovereignty was being held hostage. They said that steps would be taken to adopt an effective strategy from the platform of the joint opposition to make people aware of the “deadly effects and consequences” of government’s policies.