Former AJK president says Azad Kashmir has made remarkable progress in education, infrastructure and many other spheres of life despite weaknesses and shortcomings 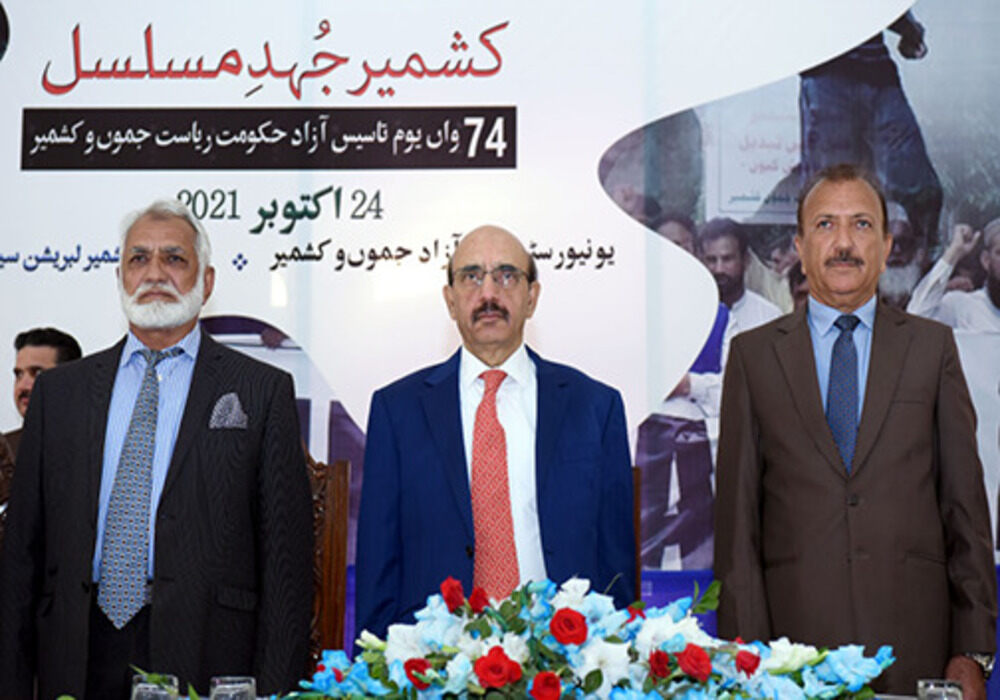 Former Azad Jammu and Kashmir (AJK) president Sardar Masood Khan has said that there can be no peace in the region, including India, without the resolution of the Kashmir conflict.

“Durable peace in South Asia will not be possible without peaceful resolution of Kashmir problem. If the international community fails to play its role with regard to the Kashmir dispute, it will have serious repercussions for peace in South Asia,” he warned.

Terming the formation of a revolutionary government under the dynamic leadership of Sardar Muhammad Ibrahim Khan on October 24, 1947 as an important event, Masood Khan said that an impossible task was made possible because of the unprecedented sacrifices offered by our forefathers.

“The 3.5 million youth of Azad Kashmir and Gilgit-Baltistan should stand up to preserve this freedom and liberty achieved by their elders by defeating the Dogra army in 1947,” he said.

Referring to the ongoing freedom struggle in Indian Illegally Occupied Jammu and Kashmir, he said that Kashmiris have the political and diplomatic support from the state of Pakistan after the help of Allah Almighty. Pakistan, he said, is the only country, which not only fought many wars with India but also lost a part of it and did not give up its principled stand on Kashmir.

The former state president said that Kashmiris were demanding the right to self-determination, which was recognised by the international community under UNSC resolutions, but India was responding to their legitimate demand with bombs and bullets.

Highlighting the fruits of freedom in Azad Kashmir, Masood Khan said that despite our weaknesses and shortcomings, Azad Kashmir has made remarkable progress in education, infrastructure, and many other spheres of life. The region can be turned into the engine of Pakistan’s economic growth if the proper use of human and natural resources is planned, he added.

“All this happened because of the freedom we enjoy and our youth should pay tribute to their forefathers whose sacrifices gave us the blessing of liberty, he emphasized.

Addressing the seminar, former Chief Justice Chaudhry Muhammad Ibrahim Zia said that by forming a revolutionary government on October 24, 1947, and before that passing of accession to Pakistan resolution on the platform of Muslim Conference, Kashmiris had determined their destination.

Speaking on the occasion, Prof. Dr. Muhammad Kaleem Abbasi, Vice-Chancellor, Azad Jammu and Kashmir University, said that a milestone was achieved on October 24, 1947, when the Dogra army was defeated after the war of independence and a government headed by Sardar Muhammad Ibrahim Khan was established.

He said that the time is not far when occupied Kashmir will also be liberated from Indian subjugation and the people of both parts of Kashmir will celebrate freedom together.

Addressing the function, former secretary to the government, Akram Sohail, said that people of every region and clan made sacrifices for the liberation of Azad Kashmir. We must not forget the Ghazi Millat Sardar Muhammad Ibrahim Khan, Mujahid -e- Awal Sardar Muhammad Abdul Qayyum Khan, Sardar Fateh Muhammad Karilvi, Khan of Mang, Raja Akbar Khan, and other dignitaries whose sacrifices and struggle resulted in the liberation of the region.

Director-General Kashmir Liberation Cell Ershad Mehmood in his address appreciated the administration of the University of Azad Jammu and Kashmir for celebrating Foundation Day and expressed his determination that Kashmir Liberation Cell would work with all the universities of Azad Kashmir on the Kashmir issue and highlight various aspects of Kashmir freedom movement through research projects and awareness-raising campaigns.