No polio case in Sindh for over two years: CM Murad 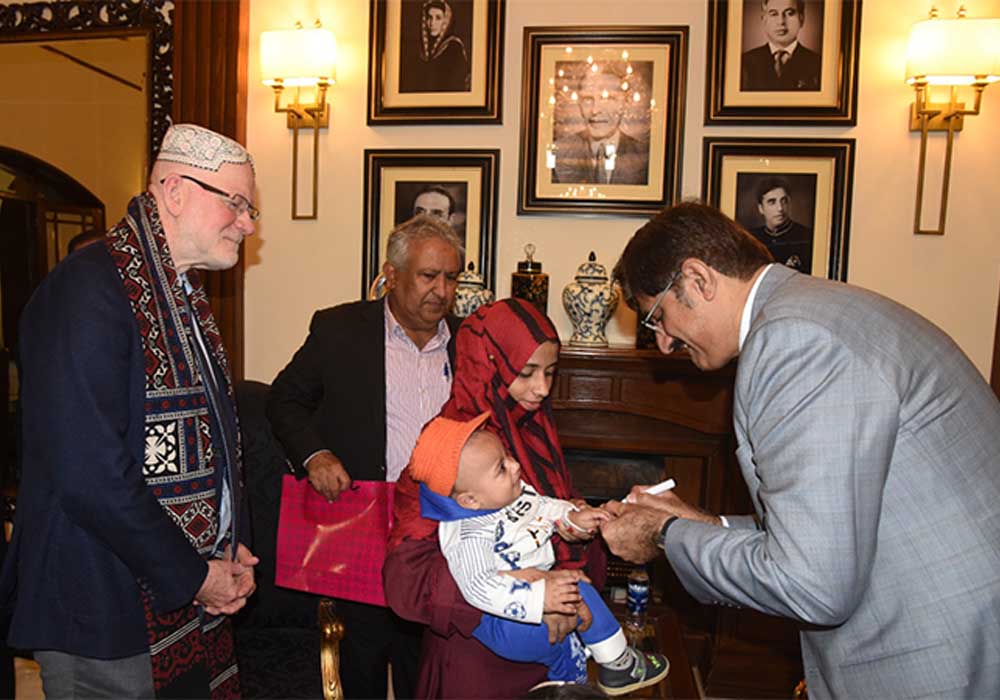 Pakistan has reported 20 polio cases since April 2022, all belonging to south Khyber Pakhtunkhwa, while positive environmental samples have also been reported from all provinces, but it is a great achievement for Sindh that no polio case had been reported for the last 30 months.

Sindh Chief Minister Murad Ali Shah said this in a meeting with a delegation of the Polio Oversight Board (POB) led by its chairman Dr Christopher Elias. The CM inaugurated the anti-polio campaign in eight high-risk districts, including seven districts of Karachi and Hyderabad district, by administering polio drops to children here at CM House on Monday.

Sindh Health Minister Dr Azra Fazal Pechuho, while briefing the meeting, said that during a week-long campaign, more than 2,771,089 children under five would be vaccinated, with more than 27,000 polio workers deployed for the campaign.

According to the health minister, around 2,943 male and 113 female security personnel have been deployed. An additional 26 senior field staff from other divisions of Sindh were deployed for monitoring and supportive supervision in very high-risk and poor-performing UCs.

The CM said that Pakistan is one of the two polio-endemic countries in the world along with Afghanistan.

Murad said that after the first case was reported in April this year from North Waziristan, the EOC Sindh increased vigilance over the entry and exit points at the provincial borders and vaccinated 128,0495 children out of 30,937 belonging to south KP district.

“If we continue with the same momentum, we will see significant results, but we must not get complacent,” the CM stressed, adding that children could be saved from childhood diseases like polio through vaccination.

The chief minister said that efforts in the programme have resulted in more than a 60 per cent reduction in refusals and missed children.

The POB delegation appreciated the efforts of the Sindh government in eradicating polio.

Dr Christopher Elias said polio has no cure but can be prevented easily through two polio drops.

At the conclusion of the programme, the CM urged parents to cooperate with the polio teams reaching their doorsteps for vaccination and help save Pakistan’s future by eradicating polio.

Polio is a highly infectious disease caused by poliovirus mainly affecting children under the age of five years. It invades the nervous system and can cause paralysis or even death. While there is no cure for polio, vaccination is the most effective way to protect children from this crippling disease.

Each time a child under the age of five is vaccinated, their protection against the virus is increased. Repeated immunisations have protected millions of children from polio, allowing almost all countries in the world to become polio-free.