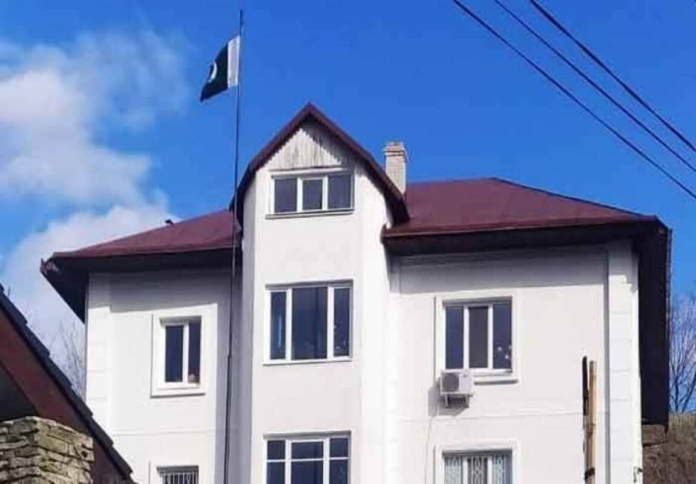 The Pakistani Embassy in Ukraine, while issuing a “fact sheet” on its evacuation efforts, stated that there “is no safe place” in the country at present.

The Pakistani mission shared that a community of 4,000 expatriates – mostly married to Ukrainians – have left the country on its advice.

On the other hand, 3,000 Pakistani students were studying in Ukraine, of which 600-700 were still present in the country, while the rest had already left on the advice of the embassy.

It said the mission had been providing accommodation to students in Ternopil, and transporting them wherever possible, especially from Lviv, to border crossings.

The Pakistani mission added that the Ternopil district administration had also “advised people to keep their lights off and remain in safe places”.

“Now, there is no safe place in Ukraine. And even cities like Lviv and Ternopil, which are in the west of Ukraine, have been hit,” said the mission.

The embassy said that “as of today, train tickets are available from Kharkiv to Lviv and Ternopil”. It added that the majority of the students from Kharkiv have already reached Lviv and departed for the Poland border.

“Pakistanis are being evacuated from Ternopil and Lviv to Poland, Hungary, Slovakia, and Romania. The embassy … is coordinating with respective Pakistani missions for onward facilities,” said the embassy.

The mission reiterated that the embassy is “making all possible efforts” to evacuate all Pakistani citizens.

“The government of Ukraine is dysfunctional, yet the embassy is making all-out efforts to facilitate the evacuation of Pakistanis from Ukraine,” said the mission.

While highlighting its efforts, it also shared that Ambassador Dr Noel Khokhar spoke with Ukraine’s deputy internal affairs minister on Saturday regarding facilitating the exit of Pakistani citizens from Ukraine. The mission has also requested a meeting with the commander of border points on the Ukraine-Poland border where it will highlight the “issue of Pakistanis stuck on the Ukrainian side”.

The mission shared that 156 Pakistani citizens had been evacuated. The number includes students, community members, and families of staff.

The mission shared that 15 students from Kharkiv have arrived at the Lviv facilitation desk, while 25 students are coming from Kyiv to Lviv.

At least 23 students are coming from Poltava to Lviv and three students coming from different cities have been received at the desk.