‘Nobody can dare dictate us’: CJ rejects all notions of pressure on judiciary 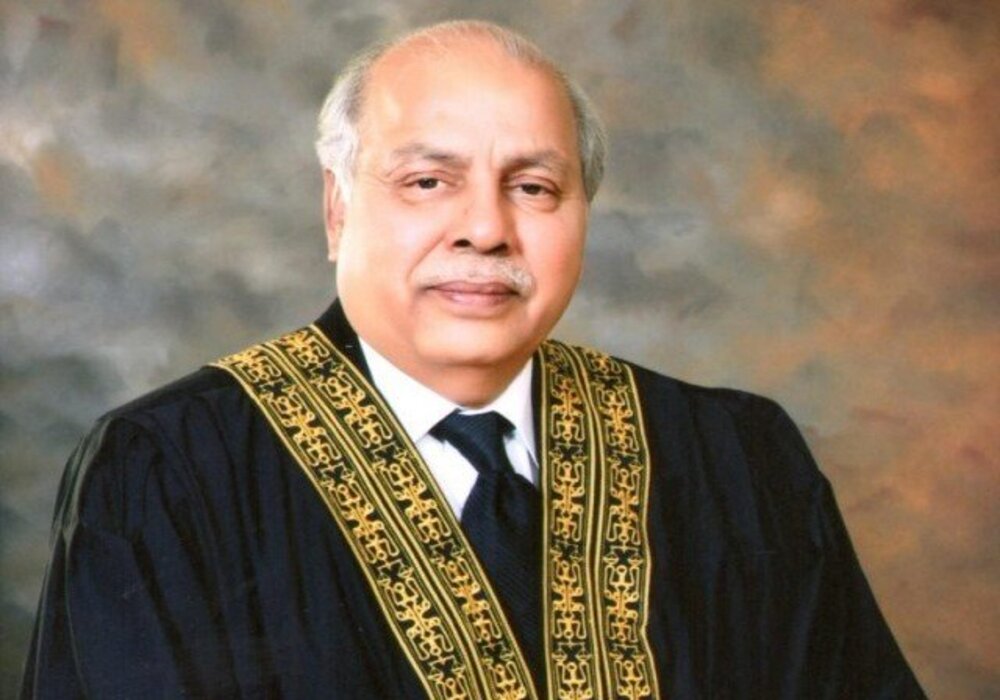 Supreme Court Chief Justice (CJ) Gulzar Ahmed has rejected all notions that the country’s judiciary was working under any pressure to render its judgments.

The CJ made these remarks while addressing the Asma Jahangir Conference at a local hotel in Lahore on Saturday. The CJ categorically stated they would not accept any ‘undemocratic setup’ and would prefer to leave as they did in the past.

“Pakistan is there for us. It was and is there forever. There is rule of law in Pakistan and not rule of people. We will not accept any undemocratic setup. We’ll reject it as we did in the past; we left it,” said the CJ, ruling out any chance of bowing to any pressure when it comes to rendering justice in the country.

The CJ vowed to continue the struggle for supremacy of law and the constitution.

In an aggressive tone, the chief justice asked, “Can anyone tell us under whose dictations the judgments have been given?”

He said that the judges of all high courts including Islamabad High Court, Lahore High Court, Peshawar and Karachi Court were working hard to deliver justice.

He added that the lower judiciary was working with dedication and commitment.

“They [the judges of the lower courts] deliver justice under the law. And everyone has the right to challenge their decisions before the appellate forums. If they think that something is missing, they may challenge the same decision before the appellate forums. Everybody has his own right. Some opinions may be right and others may be wrong but everyone has the right to have his own opinion and the right to express the same,” CJ Gulzar said.

But he warned that creating any impression that the judiciary was getting dictations to deliver its judgment was completely wrong.  “Any impression that we are working under any pressure is not correct,” the CJ said.

Giving his own example, the CJ said that he never underwent any pressure nor did he take any dictation to deliver justice. He also made it clear that nobody even dared to pressure him for any judgment during his entire career.

“Creating the impression that we are working under pressure is not correct. I have not taken any pressure in my career and nobody has dictated me nor. And nobody could dare to pressurize me or ask me to write the judgments,” he stated.

The chief justice also said that nobody could interfere in his work and that he rendered judgments without any pressure.

He again said that his courts were dispensing justice independently. Addressing Ali Ahmed Kurd, the chief justice said that all those who were thinking that the judges were working under pressure or taking dictations must read their rendered judgments.

“Kurd sahib read our judgments,” the CJ stated, in a reference to Kurd’s speech in which he said that the country’s judiciary was not free.

The CJ also said that the judgments of the courts were like an evolutionary process and it was the same all over the world.

“The courts’ decisions are like an evolutionary process and this is the same all over the world. Some people reject and many others accept them as everyone has the right to have their opinion and to express the same opinion,” he added.

Furthermore, in his fiery speech, veteran lawyer Ali Ahmed Kurd said that the ‘country’s judiciary was not free’. He delivered the speech when CJ Gulzar Ahmed, Justice Qazi Faez Isa, chief justices of Islamabad High Court and Lahore High Court, other judges, diplomats and senior lawyers were present in the conference.

Supreme Court Justice Qazi Faez Isa also addressed the conference, saying that he would like to speak about two of the constitution’s 24 fundamental rights; access to information and women’s education.

Justice Isa said that even religion guarantees that things must not be hidden from the public. He also said that there was a court verdict that if the prime minister could talk to the media as a party head, then the opposition should also be given the time to speak.

Referring to the independence of judiciary, he also mentioned former military ruler General (retired) Pervaiz Musharraf and said that he [Musharraf] first administered oaths [of judges] and then asked them to hear his own cases.

“We as a nation, as a civil society, as lawyers and as judiciary, need to make this commitment that we shall protect the constitution,” he added.

Later, Islamabad High Court (IHC) Chief Justice Athar Minallah, while addressing Advocate Ali Ahmed Kurd, said that a judge who was free could not find any justification for decisions made under pressure.

“I’m thankful to Ali Ahmed Kurd that we have come to know through his speech what the people and bars think about us,” said CJ Minallah.

“As a chief justice of Islamabad High Court, I strongly believe that we [the judges] should not repeat the mistakes of the past,” said CJ Minallah, adding that he was a man of positive approach and he was thankful to Ali Ahmed Kurd, as because of him, he got a chance to speak the truth.

“We can’t hide our heads in the sand and we [the judges] should accept our mistakes,” he added.

He also mentioned the case of Zulfiqar Ali Bhutto in his speech. He stated that there were many verdicts which became part of the country’s judicial history and could not be erased.

He said, “We can’t refuse to accept our mistakes, we have changed the course of history of this country. The half-life of Pakistan’s existence is based on authoritative rule. The successive governments destroyed fundamental rights and suppressed freedom in the country. The lawyers ran the movement but the credit for this struggle cannot be taken up by the lawyers only, as all other players were equally important.”

European diplomats also spoke on the occasion and paid tribute to Asma Jahangir for her services to human rights and as a towering figure of the lawyers’ community in Pakistan.