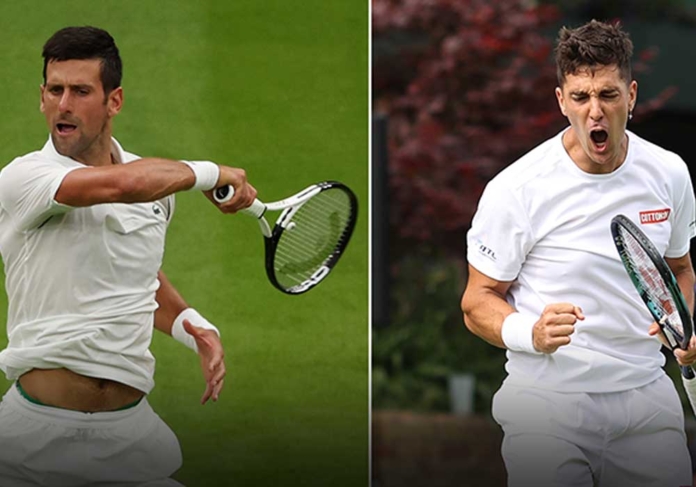 Top seed Novak Djokovic looked every bit the dominant player who has won the last three Wimbledon titlesin a commanding 6-1 6-4 6-2 win over Australian Thanasi Kokkinakis on Wednesday to power into the third round.

The 35-year-old, bidding for his seventh Wimbledon title, looked scratchy during his opening win over Kwon Soon-woo but he was back close to his usual lofty standards against the 79th-ranked Kokkinakis. The Australian defeated Roger Federer in the second round of the Miami Masters in 2018 but there were no signs of another upset on Centre Court as the 20-times major champion dictated terms from the start.

It was the 23rd straight victory for Djokovic at the grasscourt Grand Slam. “I’m very happy with my performance today,” Djokovic said on court. “I thought I started off very well, very solid from the back of the court, made him work for every point that I managed to get his serve back in play. “I tried to work him around the court, bring a lot of variety in the game.

“It was not easy to serve because of the wind, it was very swirly today on the court, so tough to toss the ball. But I think from my side overall, a really high-quality performance and I’m very pleased.” The Serb, who defeated Kokkinakis in straight sets in their only previous meeting seven years ago at Roland Garros, broke his opponent’s serve early in each of the three sets and managed five breaks in the match.

Djokovic dominated rallies with his precise groundstrokes and was eager to step forward at every opportunity – winning 30 out of 38 points at the net.

He brought the crowd to their feet with well-disguised drop shots and when Kokkinakis chased a few of them down, Djokovic calmly played the overhead lob to keep his opponent stranded at the net.

The only opportunity Kokkinakis had on Djokovic’s serve came when the Serb was serving for victory, but he duly saved the breakpoint and closed out the win in two hours on his second match point.

“I must say that I’m quite pleased with the way that I raised the level of tennis in two days,” Djokovic added.

“Hopefully, I can keep that trajectory, keep getting better as the tournament progresses. I’m obviously just thinking about the next challenge and hopefully things will get better and better.” For a place in the fourth round, Djokovic will meet compatriotMiomir Kecmanovicwho beat Chile’s Alejandro Tabilo in four sets.

Second-seeded Estonian Anett Kontaveit tumbled out of Wimbledon in the second round on Wednesday, thumped 6-4 6-0 by big-serving German Jule Niemeier, who is making a mark on her first appearance at the Championships.

The 26-year-old Kontaveit could not counter the German’s huge ground strokes and looked progressively more downhearted as she failed to find her range on a sunny No.1 court. Niemeier, 22, and ranked 97 in the world after injury problems disrupted her early progress, jumped and punched the air after Kontaveit put yet another shot into the net on match point.

The Estonian, who has not enjoyed the same success this season as she did at the end of 2021, produced 24 unforced errors in a match lasting under an hour.

Venus Williams to team up with Jamie Murray on Wimbledon return

Five-times Wimbledon singles champion Venus Williams will return to action for the first time in almost a year after the American and Briton Jamie Murray were on Wednesday granted a wildcard for the mixed doubles at the All England Club.

The 42-year-old has not played on the Tour since a first-round defeat at the Chicago Open last year due to a niggling leg injury. Murray is a twice mixed doubles winner at Wimbledon – partnering Jelena Jankovic in 2007 and Martina Hingis in 2017 – while Williams reached the final with Bob Bryan in 2006.

The pair will take on Alicja Rosolska and Michael Venus in the first round.

This is not the first time the two tennis families have come together, with Serena Williams and Andy Murray combining in the mixed doubles at Wimbledon in 2019 and reaching the third round.