Only a third of flood victims provided tents: CM

Says province needs 1.5 million tents; trying to source them from wherever possible 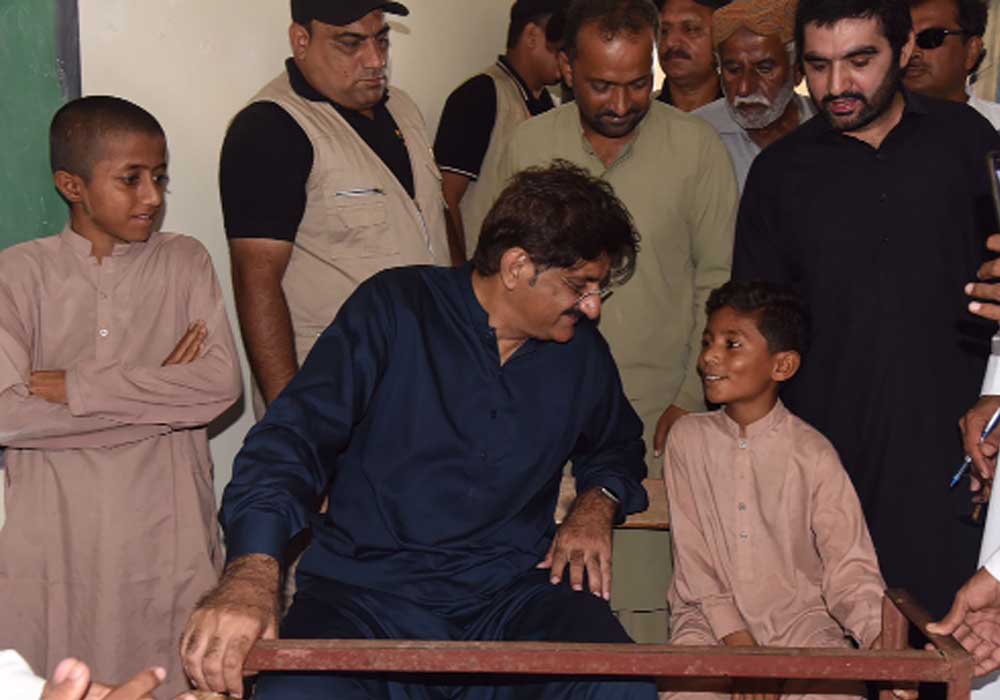 Sindh Chief Minister Syed Murad Ali Shah revealed on Thursday that the provincial government is facing a shortage of necessary relief goods, particularly tents and added that it has been able to provide tents to only 33% of flood victims and has ordered more.

“We are trying our level best to provide relief goods to the flood victims,” said the CM. During his visit to Thatta on Thursday, Sindh Chief Minister Syed Murad Ali Shah expressed high concerns over the devastation caused by the floods and the loss of human lives across the province. During his surprise visit to the relief camps in Ghorabari town of District Thatta he intermingled with the flood victims to gain knowledge about the prevailing state of affairs in the camp and the standard of facilities being provided there. The provincial chief executive then visited the basic health unit of the area where he sought information about the diseases caused in the wake of recent flood from the staff present there and issued necessary directions to them.

He grilled the officials of the health department over the loss of five lives at the relief camps in Thatta. Later on, while talking to media persons at the residence of MPA Ali Hassan Zardari in Ghorabari, Murad said that the provincial government was facing a shortage of necessary relief goods, particularly tents. He said that during the current season mosquito nets were required at all the relief camps and his government has been trying to address that need as well. During the briefing, the CM was told that 140,157 people were affected by the recent calamity in district Sujawal, and 3,492 families had taken refuge in the relief camps. Sujawal District Commissioner Shahriyar Gul Memon told the CM that 14 tent cities have been set up in the district, and mentioned that 37 union councils of five talukas of district Sujawal had been affected by the deluge.

During his visit to the protective embankments of both the districts, Murad ordered the strengthening of the dykes and said that the provincial government is working with NDMA to form effective strategies to lessen the effect of the flood calamity in the coming days. Chief Minister Murad said Sindh requires 1.5 million tents but only 0.25 million have been arranged by Thursday. “We are taking things from all the manufacturers in the country,” he said, adding that relief items are also coming from international sources. The security forces, NDMA, and federal and provincial governments are working jointly, he said.

In order to witness the plight of the flood-affected people living in the camps and along the roads, Chief Minister Murad Ali Shah visited them personally in four districts of the Hyderabad division and got cell numbers from one of the affected persons in each camp just to interact with them personally. “I have come here to see you without informing the district administration so that I can witness in which conditions you are living, how much relief goods you are receiving, and how much attention is given to your problems,” he told the affected people.

He further added: “Now, I am getting your cell number so that I can talk to you personally to know the response of the administration giving to you.” He intermingled with the affected people and patently heard their problems and orders and passed orders for their mitigation. He started his visit in the Thatta district where he directly went to visit Gel Mori camp, near Pir Patho. He mixed up with the affected people living there and they told him that they were provided with ration bags and water but, doctors visited them only once in the beginning. The chief minister talked to the District Health Officer (DHO) and directed him to ensure visits to the camps twice a week.

Murad Ali Shah, after visiting the school went to Gel Mori Basic Health Unit where OPD was in progress. When he reached there around 150 patients, mostly the flood victims were getting checked. The doctor present on the duty told the chief minister that most of the patients were suffering from malaria and skin diseases. On the last leg of Thatta’s visit, Mr Shah went to the embankment of River Indus known as Gulel Area where a camp was established along the bund. The chief minister met with the affected people and had his blood pressure checked along with their medical check-ups. One of the affected persons told the chief minister that five of the affected persons have died during the last 15 days.  At this, the chief minister expressed his displeasure with the DHO and the district administration for not taking proper care.