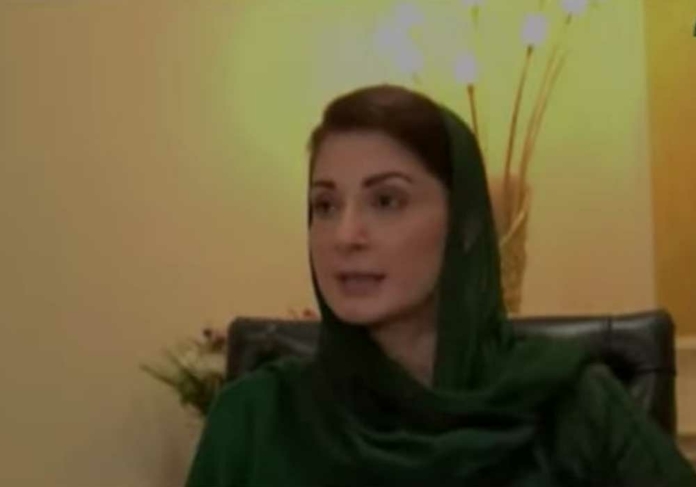 Vice president PML-N Maryam Nawaz in a press conference from London stated that the only aim of Imran khan’s long march is to stop army chief’s appointment.

“Fitna Khan’s only target is to disturb the army chief’s appointment,” Maryam stated.

She said that the army chief appointment will be done peacefully by Prime Minister Shehbaz Sharif.

Maryam Nawaz also expressed her condolences on the death of reporter Sadaf Naeem during the long march.

While talking about Imran khan she stated, “long march does not suit a person like Imran khan who has destroyed foreign policy, governance, and economy during his tenure.”

She further added that public tax being used in the security of long march is criminal.

Maryam Nawaz stated that Imran khan’s real face is now in front of the public that’s why they are not participating in the long march.

She further called Imran khan a bully and called the long march, the last plan of Imran khan. She said that Imran khan is looking for an establishment that acts on his command.

She said it’s been 5 days and the long march is stuck in Lahore for 5 days as this is not how long March is done terming it as a part-time long march.

She also urged the Gujranwala public to take care of the clock tower calling Imran Khan a “Ghari chor.”

Maryam said that Imran khan’s lies have terribly disturbed Pakistan’s relations with foreign states.
“Because of him DG ISPR and DG ISI have to end their silence,” said Maryam.

She went on to say that Imran khan is not addressing the allegations against him because they are true and there is no answer to them.

She also stated that Imran khan should be shameful of doing Toshakhana corruption.

Maryam Nawaz said she doesn’t think of Imran khan as a democratic leader, calling him a foreign-funded person.

Khan was also chastised by the PML-N vice president for bragging about winning the byelections, claiming that he wins from constituencies that he vacates and then sings his own praise of winning the elections.

She challenged Khan saying he should wait for his main opponent, PML-N Nawaz Sharif, who has “yet to be given a level playing field.”

She also said that Imran khan first offered COAS to have a lifetime extension but now he is calling him Mir Jaffar and Mir Saddiq. She further added that Imran khan himself has proven Nawaz Sharif’s innocence by saying “establishment told me that Nawaz is Chor.”

She also called out Imran khan and said, “Nawaz Sharif is not getting NRO’s your lies are getting revealed in front of everyone.”

Maryam claimed that another major scandal would be revealed soon about which Khan had been lying constantly, claiming that the court had never declared him ineligible.

She said that the court should take notice of Khan’s statement as he is continuously lying that he has not been disqualified.

She also said that Imran khan’s political ABC is incorrect that’s why he was having secret meetings with the establishment to hold elections.