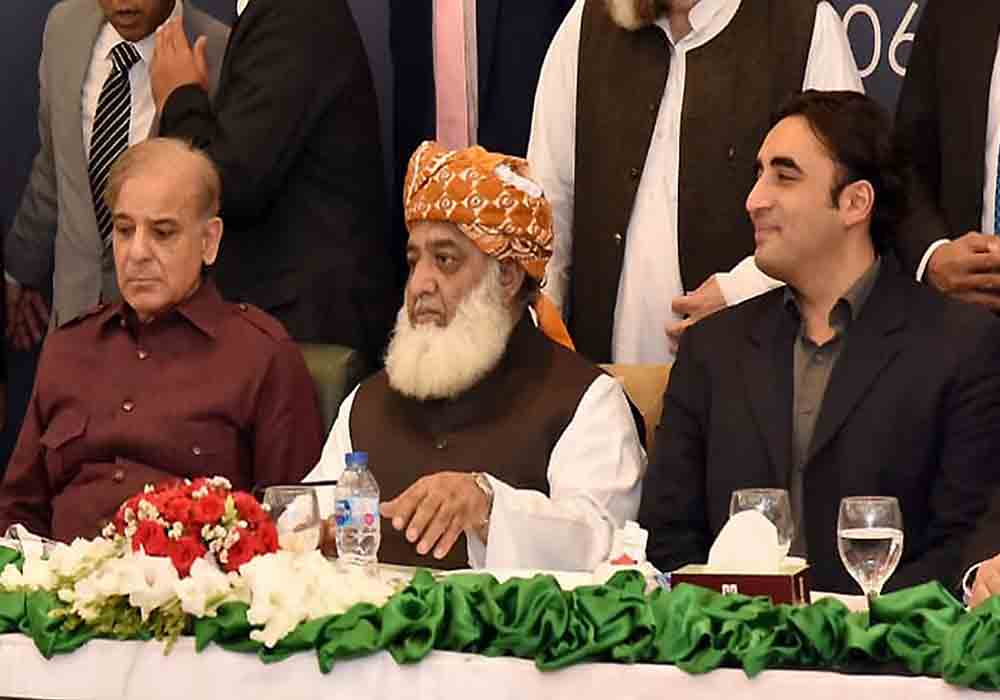 The joint opposition on Saturday evening backtracked on its statement issued earlier in the day – threatening to disrupt the upcoming Organisation of Islamic Cooperation (OIC) meeting in Islamabad – and pledged that they would not “allow in any way” the country’s internal political crisis to affect the moot of Islamic countries.

“We want Monday’s [National Assembly] session to start with no-confidence motion but if it is not summoned by Monday then we will stage a sit-in the House… we will then see how you will be able to organise the OIC conference,” Bilawal had said at a joint press conference flanked by Shehbaz, Maulana Fazlur Rehman and other opposition leaders. “If they threaten us by not following the law, the constitution and rules of the NA, then it is my stance that we will continue sitting on that floor until we are given our right,” he had said.

Shehbaz had also given his consent to Bilawal’s proposition and said that if the speaker did not call the session within the stipulated time and uses “delaying tactics, we will then be compelled to stage a sit-in in the assembly hall”.

Reacting to this, the federal ministers warned the joint opposition against disrupting the OIC huddle, expressing hope that “Bilawal won’t become a tool to fulfil the Indian agenda of sabotaging the crucial meeting”.

The opposition, in a joint statement issued late Saturday, said it would warmly welcome the foreign ministers, delegates and other dignitaries of the Islamic world to Pakistan on the occasion of the 48th meeting of the Organisation of Islamic Cooperation (OIC) Council of Foreign Ministers.

They said the arrival of distinguished guests was a source of joy and pride for them, and added that that they looked forward to welcoming the “esteemed guests”.

The opposition also appreciated the “spirit and determination” of OIC officials that they were coming to Islamabad to deliberate upon important issues facing the Islamic world, including Afghanistan, Jammu and Kashmir, and Palestine.

“Representing the people of Pakistan, the united opposition assured that the whole of Pakistan would warmly welcome the participants on their arrival,” read the communiqué.

During their stay in Islamabad, a conducive atmosphere in accordance with the traditional spirit of hospitality, respect and zeal would be ensured, they said. The opposition pledged to do its utmost to create an atmosphere in which the distinguished guests would be able to carry out their activities with full attention, dedication and determination.

They pointed out that to welcome and honour the distinguished guests of the OIC member countries, the joint opposition changed the dates of the long march and directed its workers not to come to Islamabad before March 25.

The joint opposition hoped that the stay of esteemed guests in Islamabad would be pleasant and they would return home with good memories, the statement added.