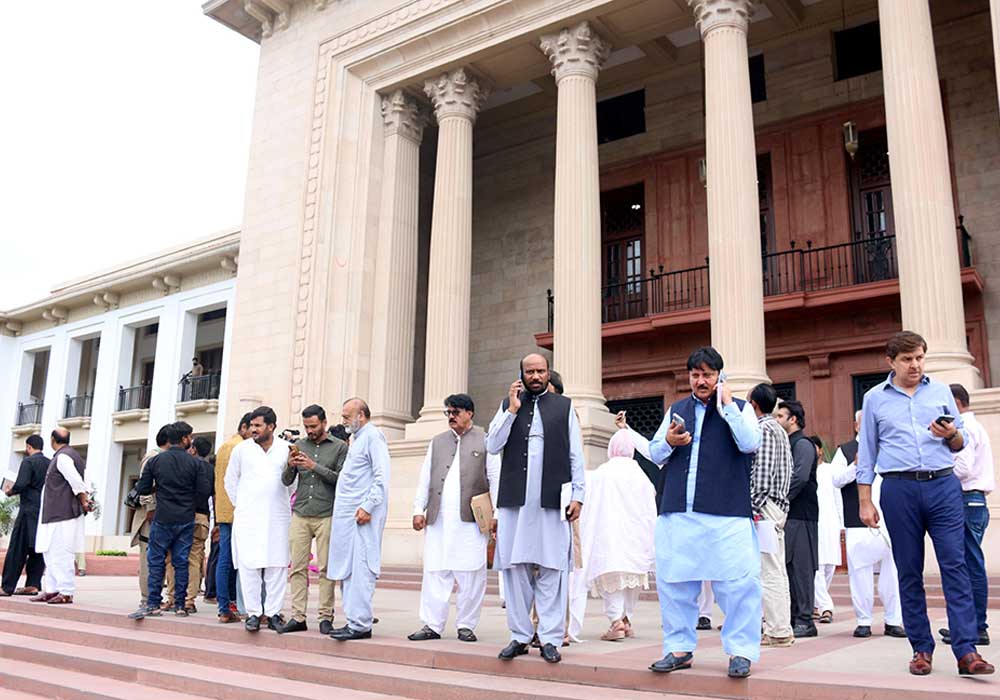 On his very first day as custodian of the House, newly elected Deputy Speaker Wasiq Qayum Abbasi landed himself in a controversy as the lawmakers of the Pakistan Muslim League-Nawaz (PML-N) staged a protest over his conduct in the Punjab Assembly.

As per the details, a PML-N MPA from district Sahiwal Malik Arshad wasn’t allowed to speak in the House by Deputy Speaker Abbasi, who was chairing the sitting for the first time since assuming charge of his office. The questions of Malik Arshad were there on the agenda item during the question hour but he wasn’t present in the House when his name was called by the chair. Later, Arshad entered the House but the deputy speaker refused to take his questions.

The MPA kept sitting in the House till the end of question hour but he wasn’t allowed to speak by Deputy Speaker. In protest, the lawmaker pointed out the quorum and left the House. The treasury claimed that the quorum is complete and it proceeded further with the government business. It should be noted here that 93 MPAs are required to meet the quorum of the House which has a total strength of 371 members.

The opposition challenged the counting of MPAs as it said that the required quorum isn’t fulfilled and therefore the House cannot proceed further. It was also noted by the journalists sitting in the Press Gallery that the treasury didn’t have the required number of 93 MPAs to meet the quorum.

The lawmakers of PML-N reentered the House and started chanting slogans against the government for deceiving the opposition by holding fake counting. They tore the copies of the agenda items to stage a protest against the conduct of the Deputy Speaker on his very first day at the coveted chair. Amid this ruckus and pandemonium, Minister for Parliamentary Affairs Raja Basharat moved four bills in the House in hurry. He moved ‘The provincial motor vehicles (amendment) Bill’, ‘The Punjab Seed Corporation (amendment) Bill’, ‘The Factories (Amendment) bill’ and ‘The Forest (Amendment) Bill’. As the House wasn’t in order at that time due to the protest of opposition lawmakers, Deputy Speaker Wasiq Qayum Abbasi adjourned the sitting till Thursday (today) at 2 PM.

The newly elected PTI’s MPA from Lahore Zaheer Abbas Khokhar said that the opposition sits in the lobby to kill time and doesn’t come to the House to take part in the assembly business. “You waste the time earlier and try to disturb the proceeding when the session starts,” Khokhar said while criticizing the PML-N-led opposition in the House.

Earlier, PPP lawmaker Makhdoom Usman Mehmood said that it has become a routine matter now that the MPAs get the reply to their questions after long delays from the concerned departments. The question Usman was related to the Year 2020 and he got the answer in 2022. “There should be a mechanism to ensure the timely receiving of our answers as the MPAs make much effort in preparing their questions,” Makhdoom said.

At this, Deputy Speaker asked him why his government didn’t make any policy to address the issue when they were in power. Later, Parliamentary Affairs Minister Raja Basharat said that it is a genuine issue and a committee should be formed to address it immediately. Deputy Speaker Abbasi announced to constitute the said committee but he didn’t give any details of the committee including its members. The session will resume again today afternoon.