Pakistan Air Force: Service to the nation during disasters

PAF played a steadfast role by evacuating the survivors to safer locations, airlifting relief goods, arranging boats for the Pakistan Army and Navy, and constructing houses from its resources in flood-affected areas 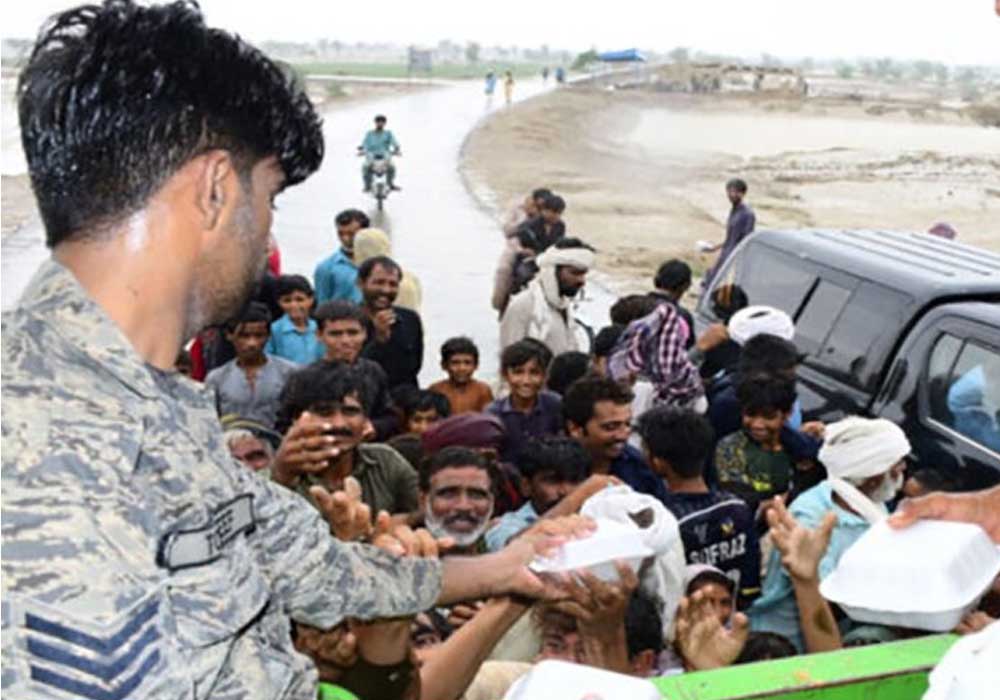 Since its establishment in 1947, the Pakistan Air Force (PAF) has always done a commendable job defending the nation and its aerial frontiers during wartime and peace. Although this remains its primary role, the contribution of the dedicated men and women of the PAF in easing human suffering and reducing losses during times of disasters and calamities has also been massive and relentless. Their rapid mobilisation, ability to operate in all weather conditions, national spirit, and resource capacity invariably bring them to the forefront of disaster rescue and relief operations.

Presently, Pakistan is facing floods of historic magnitude in Sindh, Balochistan, Khyber Pakhtunkhwa, and South Punjab, perishing precious and innocent human lives and causing tremendous destruction. Estimates suggest that since 14th June, 116 districts have been affected, 937 people killed, 218,000 houses destroyed, and 2 million acres of orchards and crops impacted. In these unprecedented times, the PAF has risen to the occasion and is rendering ceaseless service to the nation. PAF’s emergency response teams have been constantly engaged in evacuating flood victims to safer locations and delivering ration packs, cooked food packs, medicines, and tents to the affected families.  Additionally, the PAF has established field medical camps where the Force’s doctors and para-medical staff are constantly attending to those affected.

Besides, recent history is filled with other unfortunate calamities where the PAF contributed in all possible ways – be it during the earthquake in 2005, the devastating floods in 2010 and 2011, and the deadly COVID-19 crisis, to name a few. In 2005, Pakistan faced one of the deadliest earthquakes in the Himalayan region of northern Pakistan and Azad Jammu & Kashmir, which killed at least 73,000 people and injured another 69,000. During this episode, the Chaklala air base served as ‘the lifeline for the quake-affected people by serving as a major operational area for delivering relief goods. Airbridge was also established by the PAF to facilitate the evacuation of those affected and the provision of relief goods.

The year 2010 was tragic for the people of Pakistan as unprecedented monsoon rainfall resulted in massive flooding in the Sindh, Khyber Pakhtunkhwa, Balochistan, and Punjab regions of Pakistan and affected at least 20 million people. In 2011, another massive flood hit Sindh, which affected around 9.6 million people. During these crises, the PAF played a steadfast role by evacuating the survivors to safer locations, airlifting relief goods, arranging boats for the Pakistan Army and Navy, and constructing houses from its resources in flood-affected areas. Moreover, the PAF assisted welfare and charity organisations by voluntarily carrying their relief goods to the flood-hit areas free of charge, and established field medical camps. A Crisis Control Cell was also formed at Air Headquarters, which centrally controlled the PAF’s rescue and relief operation.

Initiatives of the PAF during the COVID-19 pandemic are a further testament to its commitment to national humanitarian assistance and helping the government combat the crisis. During the very initial phase of the pandemic, PAF transport planes supplied relief goods to the Pakistani students stranded in Wuhan city, China which served as the epicentre of the virus, and brought in much-needed supplies from China, including N-95 masks, medical facemasks, ventilators, and testing kits.

Moreover, the PAF crew put their own lives at risk to carry Zaireen from Iran to Skardu when the former was recording a rapid surge in COVID cases and arranged a special flight to carry people who landed and were stuck in Skardu. The PAF personnel also contributed a proportion of their salaries to the corona relief fund. Additionally, it was the PAF that transported the first batch of the COVID vaccines to Pakistan from China.

While the instances mentioned above represent PAF’s role during some of the major disasters, their unrelenting service to the nation does not end here. No matter the magnitude of the crises, the PAF has always risen to the occasion to provide heroic and open-hearted services.

So, on this 7th of September, let us honour the contribution of the PAF heroes in the battles to save our fellow countrymen from hunger, disease, and destitution in the face of disasters and calamities. Let us also pray that the miseries of the millions of innocent flood victims are eased and such unfortunate events do not recur in the future.