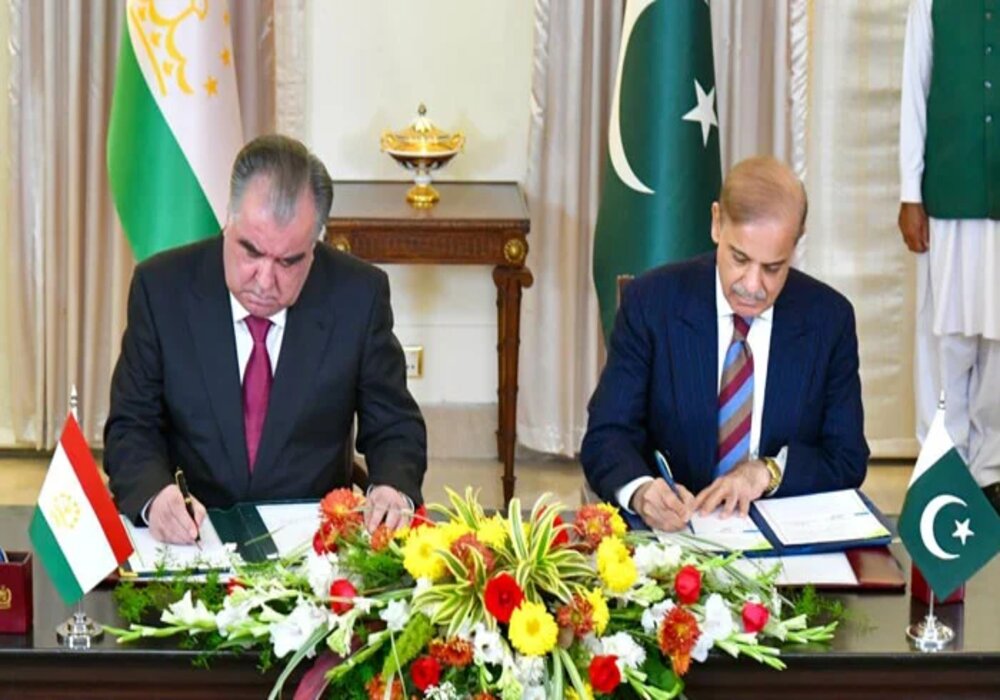 On the occasion of the arrival of Tajik President Emomali Rahmon Pakistan and Tajikistan have signed various agreements.

Prime Minister Shehbaz Sharif has said that Pakistan and Tajikistan have brotherly relations since long time.

Addressing a joint press conference with President of Tajikistan Emomali Rahmon he said that Pakistan was one of the first countries to recognize Tajikistan and relations between both countries have been very friendly ever since. He said that both countries and their people have been working for economic cooperation and enhance bilateral trade in the fields of industry, agriculture, joint ventures and energy.

He said that Tajikistan has been very special place and the gateway of Central Asia. He said to look to forward to complete CASA-1000 as early as possible and have rail connectivity between Central Asia and Pakistan and also have road, energy connectivity.

He thanked PM Shehbaz and Pakistanis for generous hospitality. He said that relations with Pakistan had special meanings for Tajik people. He said that he wanted an uplift in the relations.

Tajik President at the moment said that strengthening traditional relations with Pakistan had occupied major development directions for Tajikistan. He showed belief that the MoUs signed earlier will give the bilateral friendly relations new directions.

He said that in the course of meetings and delegations levels we have discussed different relations levels. He said that current economic cooperation particularly energy and transportation especially CPEC and Gwadar along with Karachi were discussed in detail during meetings. He also said that they had discussed CASA-1000, agriculture and energy cooperation along with food security and joint ventures of free zones of trade.

Tajik President also said that the existent mechanism of trade, economy, and scientific research will be enhanced and will be one of the key factor for the bilateral ventures. He said that cooperation in fields of science, education, culture was very important. He highlighted that security cooperation to eradicate and fight terrorism along with stopping drug trafficking were challenges that were important to address.

He praised Pakistan’s support in climate change and all fields and said that both countries have shared interests and will continue to work for betterment of both nations. He thanked PM Shehbaz for hospitality and invited him to visit Tajikistan.

Tajik President Emomali Rahmon arrived in Pakistan on a two-day visit and was received by Federal Minister for Commerce Naveed Qamar at the airport.