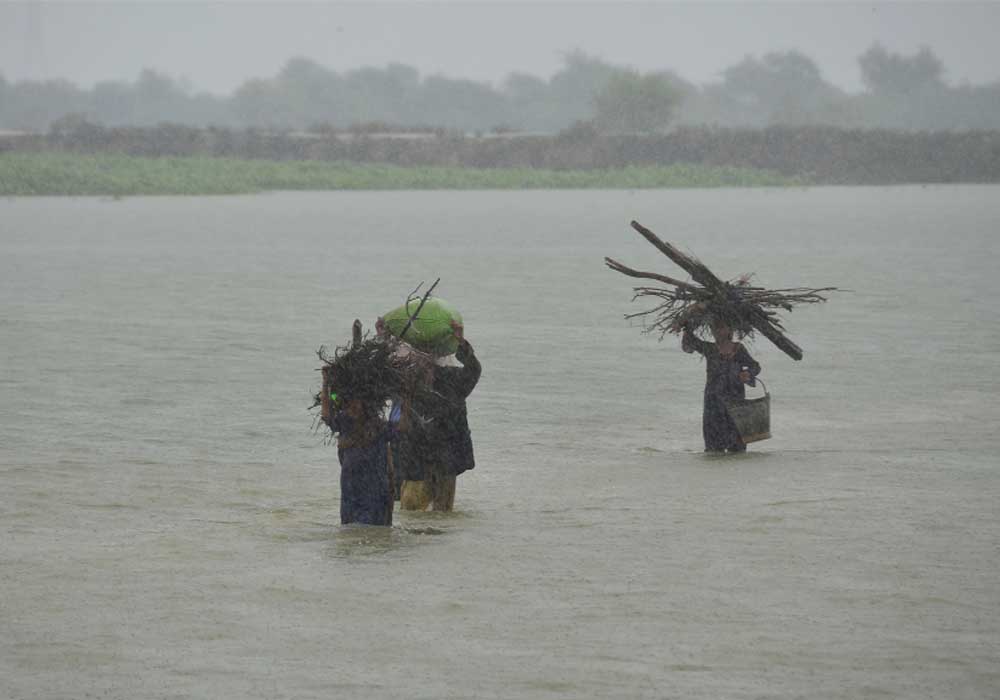 As scenes of rain and flood devastation continue to emerging from across Pakistan, Minister for Climate Change Sherry Rehman on Wednesday said a “humanitarian crisis” had arisen across the country, with the rain-related death toll hitting the 900 mark and mounting.

In a series of tweets, the minister said, “Since June, 903 people, including 326 children and 191 women, have died in various incidents of monsoon rains and floods.” She added that thousands of people had also been displaced due to floods. According to data shared by her, the highest number of deaths and injuries during the time period was recorded in Sindh and Balochistan. According to reports pouring in, another 30 people lost their lives in rain-related incidents in 23 districts of Sindh on Wednesday, taking the week’s toll to over 340.

Moreover, the outbreak of gastroenteritis and other waterborne diseases claimed the lives of 12 more children in different areas of the province yesterday.

The affected people, talking to the media, deplored that despite the raising cases of waterborne diseases no teams of the doctors were sent to provide the required treatment to those who fell sick. They said that after leaving their homes due to continuous heavy rains and subsequent floods, they had been facing worst humanitarian disaster, while diseases were taking a heavy toll on their loved ones. Reports from Dadu, Jamshoro and other districts said that high-ups of the Sindh government, taking notice of the deaths reported in the media, sent the teams of doctors for medication of those staying on the roadsides after losing their settlements.

According to unofficial reports, at least 30 more people died in roof collapse and other rain-related incidents. In the Piyaro Sabzoi area of Kandhkot district, the roof of a house collapsed due to heavy rains, burying five people alive under the rubble. The local police confirmed that three bodies of children had been retrieved from the debris, while two injured were rushed to the hospital. Deaths were also reported in Hyderabad, Mirpur Khas, Shikarpur, Khairpur, Jacobabad, Kashmore, Ghotki, Larkana, Nawabshah and other districts in similar incidents.

Three persons, including a woman, were killed when lightning struck them in Sujawal and Tharparkar districts. Two boys and a man were killed and three others injured near Chachro town.

Meanwhile, Sindh Chief Minister Syed Murad Ali Shah said at a press conference that recent rains and floods had completely destroyed more than 90 per cent of the crops in the province.

Earlier in the day, five students were washed away by a flashflood in Upper Dir district of Khyber Pakhtunkhwa, the PDMA confirmed.

The incident occurred in the Barawel area of the district bordering Afghanistan, in the jurisdiction of the Shahi Kot police station. “The heavy rains caused a flashflood in the nullah that hit the students who were on their way back home,” Deputy Commissioner Akmal Khan Khattak said, adding that police and rescue teams retrieved three bodies from the drain and moved them to the hospital. He said that the ages of the children ranged from seven to 11 years. Separately, a child drowned in Swat later in the day after a cloud burst was reported in the area.

With onset of the fresh monsoon spell on Wednesday, flood-ravaged south and northern parts of Balochistan once again started receiving heavy downpour, increasing the plight of calamity-hit people. “As many as 230 people, women and children among them, have died in rain-related incidents since June 1, 2022,” PDMA Director General Saleh Nasar said while talking to newsmen. Flashfloods from intense rainfall have resulted in damage, either completely or partially, to 26 897 houses in the province, while it took the lives of 200,000 cattle.

A large number of villages in Naseerabad, Mekran, Zhob and Loralai divisions of Balochistan are inundated in the floodwater, with thousands of people displaced.