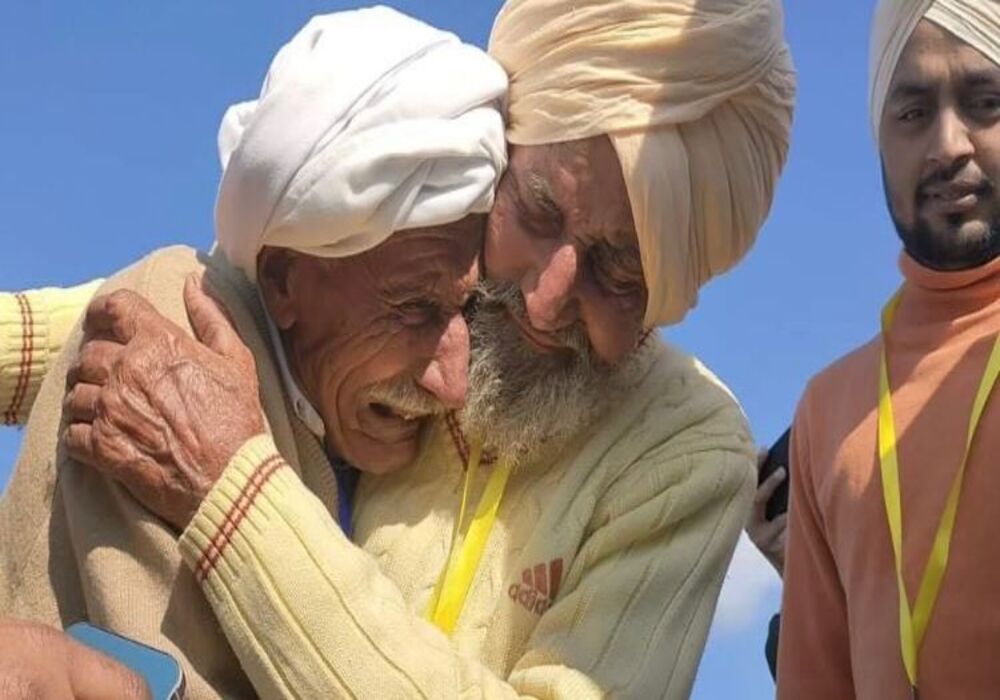 The Pakistan High Commission (PHC) in New Delhi has issued a visa to Sikka Khan (Habib) to visit his elder brother Siddique in Faisalabad days after the two brothers met in Kartarpur.

The brothers had met each other after 74 years apart. It took seven decades for them to embrace each other at the visa-free corridor, despite just living 220 kilometres away from each other, divided by the Pakistan India border.

Separated at partition, Siddique, who is in his 80s and from the village of Bograan, Faisalabad, met his younger brother Habib (nickname Sikka), from Bathinda, at Kartarpur Corridor on January 12, from where they appealed to the governments of Pakistan and India to allow them to live together for some time.

Local and international media widely covered the tragic story of the separated brothers and demanded the governments on both sides to look into their case with sympathy.

“The story of the two brothers is a powerful illustration of how the historic opening of the visa-free Kartarpur Sahib Corridor in November 2019 by Pakistan is bringing people closer to each other,” the PHC tweeted on Friday, while issuing Habib a visa.

In a second tweet, Habib could be seen paying thanks to the government of Pakistan for allowing him to meet his family.

Habib was separated from his father and his two-year older brother Siddique during the partition of 1947. Siddique migrated to Pakistan along with his granduncle and has been living with his family in Bograan. His father was killed during the partition. The native village of the family was Jagraon, now sub-division of Ludhiana district of East Punjab.

The story of the brothers’ separation began weeks before the 1947 partition. Siddique narrates his mother went to Phule Wala village in Bathinda to meet her parents (Siddique’s maternal grandparents). She left Siddique at home with his father and took her younger son Habib (toddler at time) along with her on the journey to Phule Wala.

Meanwhile clashes erupted and Muslim families of Jagraon had to leave their homes. Siddique’s father was killed in a violent attack on his family on their way to newly created Pakistan, but he and his granduncle luckily escaped and reached Faisalabad, then Layalpur, to make a fresh start at life.

However, Siddique could not forget his younger brother and mother during the last 74 years. He made frequent tries to find his mother and brother but failed.

At last, the real miracle happened two years ago when Nasir Dhillon, who ran a Punjabi channel on YouTube, uploaded Siddique’s message in which he mentioned the story of separation. He talked about Jagroan and Phule Wala in the message and appealed to the residents of both villages to help him find his brother.

Siddique said he had a feeling in his heart that his younger brother was alive. The video message reached Phule Wala where some elders knew the story of now Sikka Khan, who was originally named Habib.

The Punjabi Lehar YouTube channel arranged the meeting of the two on video call. Habib gave all signs to Siddique that he was his real brother, with both having almost identical facial features. Habib told his brother the name of their mother who died with grief remembering her family few years after the partition. A landlord of the Phule Wala village nourished Habib after their mother’s death.

Both attempted to get visas to either side of the border since their meeting but could not succeed. At last, they met at the visa-free corridor at Kartarpur two weeks ago.

Following the worldwide coverage of the story, the PHC issued visa to Habib on Friday and he was expected to reach Pakistan in couple of days.