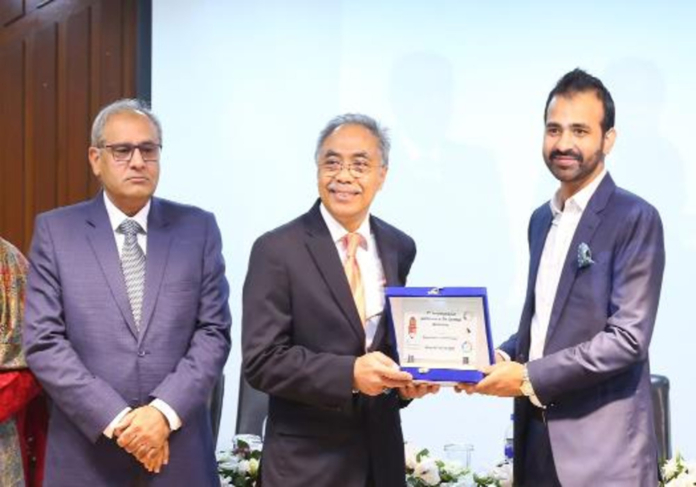 The Indonesian ambassador to Pakistan Adam Muhammad Tugio Friday inaugurated the 2nd International Dermal Conference on the subject of “Skin and Cosmeceuticals, Production, Practice, and Regulations held here at Ali auditorium of The University of Faisalabad.

The Additional Registrar Zahida Maqbool welcomed him and later after the inauguration, the Indonesian ambassador held a meeting with the Chairman Board of Governors of the University of Faisalabad Haider Amin and discussed various matters of mutual interest. Head of the Department of Dermal Sciences Ms Tanzila Khalid briefed the chief guest and other dignitaries about the aims of the dermal conference and opening session which focuses on halal cosmetics.

In his welcoming remarks, chairman BoG Haider Amin highlighted the importance of halal cosmetics and praised the Indonesian government for becoming one of the largest manufacturers of halal products in the world.

Mr. Tugio praised the efforts of the Madina foundation in the educational and medical fields. He greeted chairman BoG for successfully achieving significant rankings for the university of Faisalabad. Talking about halal cosmetics, he highlighted the scope available in the economy for halal cosmetics, especially among Muslim countries. He said that more than 25% of the global population is comprised of Muslims which makes halal cosmetics markets a massive opportunity for investors. He emphasized that the expected volume in the economy for halal products will reach up to 6 trillion dollars by 2024 so it must be the center of attention for all global investors.

Discussing the demographical similarities between Indonesia and Pakistan, Tugio stated that young influencers will play a vital role in promoting and marketing halal cosmetics around the world, especially in Muslim countries. He admired the fact that halal cosmetics will certainly face some challenges such as Islamophobia and misconceptions regarding halal products but intense research and brainstorming by institutes like the university of Faisalabad will help in facing such challenges.

Concluding the first session of the 2nd international dermal conference Mr. Haider Amin chairman of BoG presented a memento to the Ambassador of Indonesia. Shields were also presented to Professor Dr. Shaukat Parvez and Mrs. Abiha Hamid. Tugio presented a cultural book to the chairman BOG for promoting cultural harmony between Indonesia and Pakistan.