Pakistan on track to become one of fastest-growing economies: Murad

CM says SEZs being established over 1,530 acres at Dhabeji under CPEC 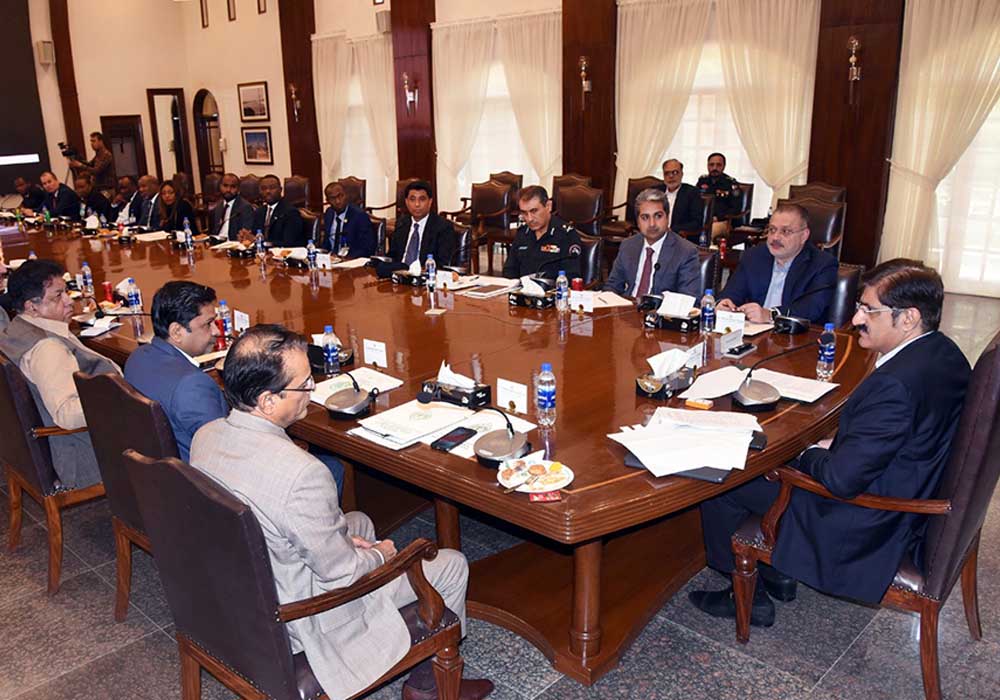 Pakistan promises to become one of the fastest-growing economies, and with the development of infrastructure, investment in energy, education, vocational training and rapidly improving healthcare, it is poised to take off and compete alongside the rest of the world, said Sindh Chief Minister Murad Shah on Wednesday.

“We are a country of over 200 million people, and by 2025 we will have 100 million people in the middle class, making Pakistan, the world’s 10th largest middle-class country,” he said while addressing an 18-member delegation of Foreign Service Academy, Islamabad’s participants of the Junior Diplomatic Course for Foreign Diplomats here at CM House. Talking about Sindh, Shah said that it [Sindh] was passing through one of the most challenging times of its history, and it was quite explicit from the unprecedented and heavy torrential rains that occurred in July and August.

“As of today 780 lives have been lost, including 332 children, 304 men, and 144 women,” he said, and quoting the reports of Sit-Rep of PDMA around 1.8 are partially and fully damaged houses, 3.7 million acres of the crop have been lost, 1,330 union councils of 23 districts are calamity-hit, and major roads and bridges, hospitals, and schools are also severely damaged.

Replying to a question, the CM said that his government undertook relief and rescue operations. “Major relief items like tents (427 million), ration bags (1.42 million), and mosquito nets (1.807 million) have been provided to the people living in flood-affected areas,” he said and added that his government is also working with World Bank and has established a public sector company for the rehabilitation and reconstruction of damaged houses in calamity-hit areas.

Talking about Karachi, Shah said that it was a financial hub and port city of Pakistan, and it was the world’s seventh largest city. “Industry and business success are fundamentally dependent on two key criteria: connectivity and access to the commercial centres that make Sindh, including Karachi and its surrounding areas, an ideal business destination,” he said.

To a question regarding specific investment opportunities in Sindh, Murad Ali Shah said his government was establishing a Special Economic Zones over an area of 1,530 acres at Dhabeji, a Priority Project under the China-Pakistan Economic Corridor (CPEC). He added that the project would facilitate potential investors to establish new enterprises or transfer their facilities to Dhabeji SEZ. He also pointed out that the project, under Public Private Partnership, has been awarded for development, and would be ready in a couple of years to attract industrial output of millions of US dollars and about 100,000 jobs.

The CM disclosed that the federal government has approved two new economic zones on the recommendation of Sindh Investment – Nausheroferoze Industrial Park, the project of the Federal Government being developed by the National Industrial Park and Bhulari Special Economic Zone – Pakistan’s first private sector SEZ. He added that besides, Khairpur SEZ has already been completed and industrial units were being set up on priority. Shah also discussed various other projects such Education City Project. He added that the Education City was planned over an area of 8,921 acres and was a hallmark of his government to empower the youth with knowledge, skills, and institutions investing in our valuable human resources.