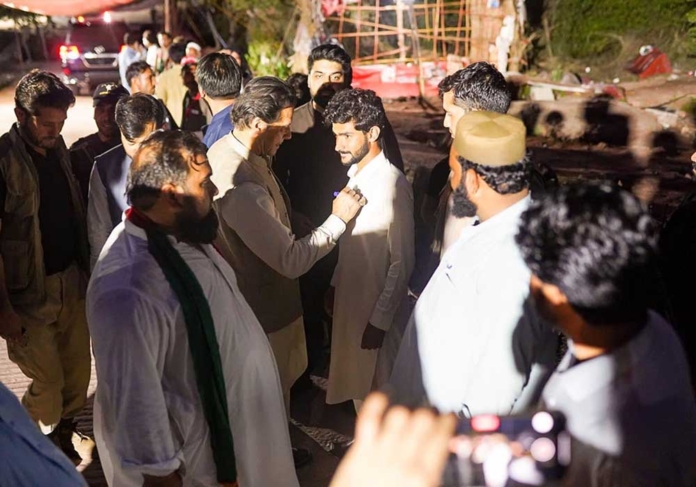 The regime change conspiracy’s only sufferer is Pakistan while the nation is now being enslaved, Pakistan Tehreek-e-Insaf (PTI) Chairman and former prime minister Imran Khan said on Friday.

Imran was addressing a webinar organized by the Islamabad Policy Institute to highlight the impacts of the regime change in Pakistan. The webinar was titled “Regime Change: Impact on Politics, Security and Economy”. The former prime minister said that the current situation has sparked a debate on what happened to the country. As per the economic survey, the national economy was improving during the PTI tenure.

“Improvements were seen in the sectors of agriculture, industry and others during the PTI tenure. On what basis our government was removed via a foreign conspiracy?” he asked while himself explaining that “we were told that your government was ineligible to control inflation. At this time, the inflation rate skyrockets within just two months which was never recorded in the three and half years of the PTI government.”

The PTI chief asked “who will be held responsible for forcing the nation to pay the price of the regime change in the shape of inflation and loadshedding. We are afraid that the country is going to face Sri Lanka-like economic crisis”. Imran Khan said that the economic collapse of Pakistan will create the biggest challenge to national security. He stressed giving importance to economic security.

He alleged that the “corrupt rulers” imposed on the country have managed to end their corruption cases worth Rs1,100 billion, by amending the NAB law. “Have the present rulers any interests in Pakistan? Those who fled abroad due to corruption cases want to return to Pakistan after getting another NRO.”

Referring to the “neutrals”, a term that has become synonymous with military establishment, he said, “I want to ask a question from those who are calling themselves neutrals. Is this your Pakistan or not? If there is an economic collapse in Pakistan then how do the neutrals save themselves from its disasters?” The former premier said that Pakistan was the sole sufferer of the ‘regime change’ and the nation was being enslaved. He warned of severe consequences if the crisis continues in the country. He claimed that the United States wants bases in Pakistan to use them for its own interests.

Meanwhile, PTI on Friday received permission from the Islamabad district magistrate’s office to hold a rally in the federal capital today (Saturday). According to a notification from the office, the former ruling party was given “permission to use the venue” of Parade Ground by the “quarters concerned”. Earlier, the PTI had given an undertaking to the district administration of Islamabad and agreed to 39 conditions for holding a rally on July 2. PTI Islamabad chapter president of the central secretariat Ali Nawaz Awan signed the undertaking – code of conduct – before Islamabad’s deputy commissioner taking full responsibility for any untoward incident and agreeing to be held responsible in case of violation of the agreement.

However, the no-objection certificate (NOC) for using Parade Ground was subject to the permission of “Staff Duties Directorate, GHQ [General Headquarters], Rawalpindi,” according to the undertaking. Through the code of conduct, the party has agreed that the gathering shall not disturb or disrupt the fundamental rights of citizens, including the right to freedom of movement, trade and business, and education, and has assured that it will not block any road – Expressway, Murree Road or service roads.

The former ruling party agreed that the gathering shall end at 12 midnight, stating that it will be the organizer’s duty to ensure the dispersal after the event ends. It nodded that the participants shall not indulge in violence or clashes. Under the agreement, the organizers are bound to ensure that the participants are dispersed peacefully, and they do not spend the night or subsequent nights at the Parade Ground.

The PTI also agreed that the participants will not enter the Red Zone of Islamabad; organizers are responsible for the internal security arrangements of the participants and providing the list of the participants to the local police in advance; and that they will be responsible for any damage caused to the public or private property. In the code, it signed a condition that no anti-state, religious, and anti-national slogans shall be raised; effigy or flag of any party shall not be burnt; weapons would not be allowed, and the law enforcers can search any vehicle or person coming to attend the gathering.