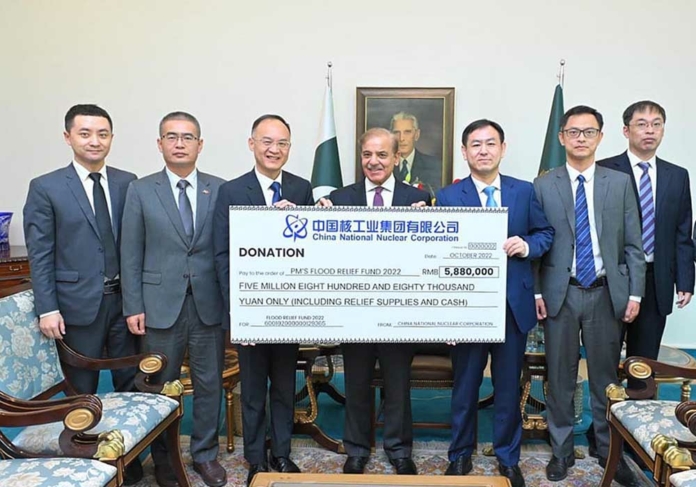 He was talking to British Minister of State for South Asia & Commonwealth (FCDO) Lord Tariq Ahmad, who called on him here. The prime minister expressed satisfaction on the positive trajectory of trade and investment cooperation between two countries, noting that bilateral trade had reached £3.1 billion. He made special reference to the positive role played by the 1.6 million Pakistani diaspora in forging closer bonds between the peoples of both countries, a press release issued by the PM Media Wing said.

Lord Ahmad expressed condolences on behalf of His Majesty’s Government on the loss of human lives due to the recent floods in Pakistan. The prime minister thanked him for the United Kingdom’s support towards flood relief efforts in Pakistan. He highlighted that Pakistan, despite contributing less than 1 percent of global carbon emissions, remained one of the most affected countries from climate change.

Lord Ahmad informed the prime minister that the British public and the Pakistani diaspora were greatly engaged in the relief and rehabilitation efforts for the flood affected people of Pakistan. Assuring the prime minister of the UK’s continued assistance for relief and rehabilitation work in Pakistan, Lord Ahmad announced an additional £10 million in relief assistance for Pakistan, bringing the total quantum of UK flood-related assistance to £26.5 million.

The prime minister highlighted the continuing Indian human rights violations in the Indian Illegally Occupied Jammu and Kashmir (IIOJK). He stressed that a peaceful resolution to the Kashmir dispute, in accordance with the wishes of the Kashmiri people and UN Security Council resolutions, was critical to achieving long-term peace and stability in South Asia.

The prime minister also reiterated Pakistan’s principled support for the universal and consistent application of UN Charter principles – including non-use or threat of use of force, respect for sovereignty and territorial integrity of states, pacific settlement of disputes, and equal security for all states. He added that Pakistan continued to call for immediate cessation of hostilities and stressed the need for diplomacy and dialogue for an early, negotiated end to the Ukraine conflict. The prime minister also hosted a luncheon for the British Minister of State and the accompanying delegation.