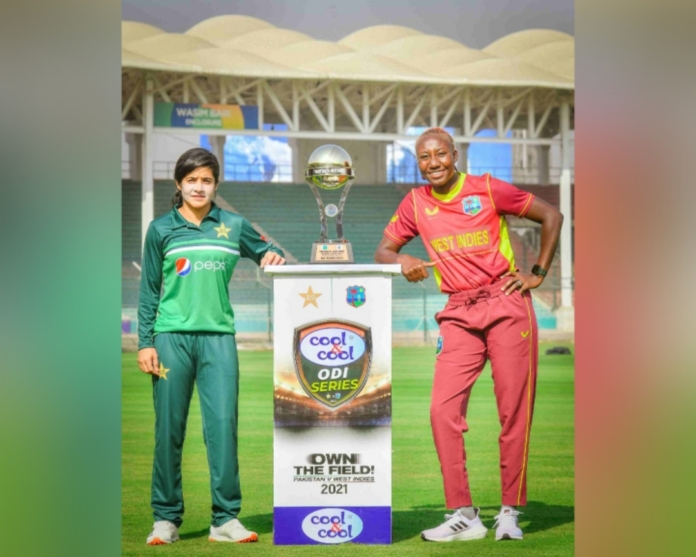 Pakistan national women’s team will start final phase of their preparations for the ICC Women’s Cricket World Cup Qualifier when they will take on the West Indies in the first of the three One-Day Internationals at the National Stadium Karachi on November 08.

Ahead of their departure for Zimbabwe on 16 November, where they will compete to win one of the three spots to secure qualification for the ICC Women’s Cricket World Cup New Zealand 2022, these three fixtures will serve as an opportunity to both sides to get the desired match practice. Wicketkeeper-batter Sidra Nawaz will lead the national side in the first match after the team management has decided to give Javeria Khan further time to gain match fitness.

Nine high-definition cameras will live-stream the series across the globe through PCB’s official YouTube Channel as part of the Pakistan Cricket Board’s efforts to expand and promote women’s game and attract youngsters towards it.

As per the guidelines issued by the National Command and Operations Centre (NCOC), the seating capacity for the three matches will remain at 50 per cent. The stands will be open to general public on Sunday, 14 November, for the third ODI and the entry will be granted on the display of original CNIC and NADRA-issued Covid-19 Immunisation Certificates.

For the ODIs on Monday and Thursday, colleges and schools have been extended invitations.

This series also marks the return of the national women’s team to the iconic National Stadium after 15 years. Pakistan last played here in January 2006 when Karachi hosted Women’s Asia Cup in which Pakistan, India and Sri Lanka played at Karachi Gymkhana and National Stadium.

Pakistan and West Indies have played twice at the National Stadium, in March 2004. The two women sides locked horns in a Test match. That match might have ended in a draw, but is remembered for opener Kiran Baluch’s stunning 242 and leg-spinner Shazia Khan’s match figures of 13 for 226 – which remain the highest Test score and best bowling figures in women’s game to date. The solitary ODI that the two teams played in the same month ended in the tourists’ seven-wicket victory.

The two teams played a five-match ODI series during the national women’s team’s tour of Antigua in June-July that hosts sealed with a 3-2 scoreline. Pakistan won the last two matches of the series and the final ODI was set alive by teenage pacer Fatima Sana.

Sidra Nawaz said, “We are very excited and looking forward to play West Indies at the National Stadium. We have missed playing in front of our home crowd and I am sure fans will be treated with quality action when the series begins tomorrow.