Woman misbehaves with restaurant workers; says they violated constitution, her â€˜medical privacyâ€™ by seemingly asking for her vaccine certificate 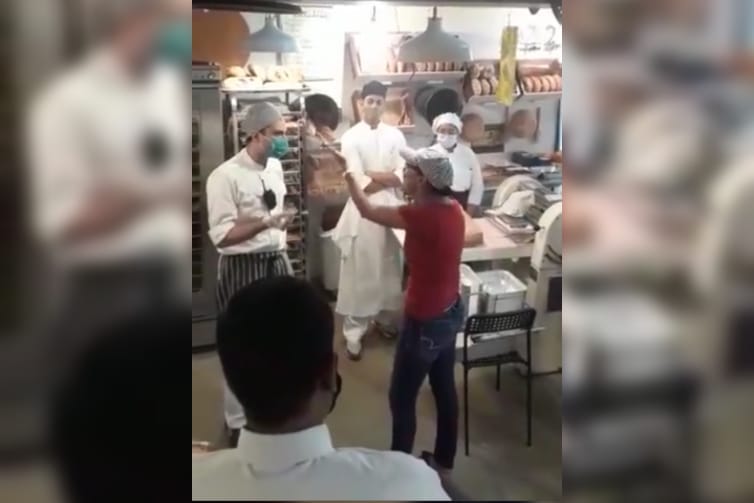 A Pakistani version of the white â€˜Karenâ€™ surfaced on social media when a woman berated workers at a restaurant because they allegedly asked for her vaccination certificate in Karachi, a video that left Pakistanis both ashamed and amused.

In a viral video, the unmasked woman unleashed fury at an employee of a high-end eatery and told him she was an activist and the employee had violated her â€˜constitutional rightsâ€™ by apparently asking for a vaccination certificate. The women proceeded to tell the worker that he was documented for violating her â€˜medical privacyâ€™, before she stormed out of the restaurant.

Many users likened the woman to a Pakistani â€˜Karenâ€™. The word Karen has been used to denote Â racist, usually white women, who behave like know-it-alls.

Rare sighting of a karen in karachi https://t.co/ZtJG2GWyya

Karens exist in every form and culture. https://t.co/dqBzPvXVwT

Vaccination card is not a private record https://t.co/FeefGFVwQ7

Several users unpacked the technical soundness of the womanâ€™s allegations. A user pointed out that asking for a certificate was not an affront to the constitution. They added that the woman could probably be charged with assault and harassment herself.

Asking for proof of vaccination is not violation of the Constitution, law, or any codes of human rights. This self-proclaimed activist is thick headed and, if she knew any better, can faced charges for assault and harassment + possible privacy laws

Another said that vaccine certificates were public information. She furthered that anti-vaxxers also referred to themselves as activists.

One said sarcastically that calling oneself a human rights activist did not come with the prerequisite to be an actual â€˜humanâ€™.

There is no qualification of having to be a HUMAN before calling yourself a Human Right Activist. Lol https://t.co/6H0AeTdscL

Users also hoped for strict punishment for the woman and defended the restaurant workers for not giving in to the â€˜Karenâ€™.

#Pakistani #Karen – calling herself a human rights activists as she puts human lives in danger! The irony! Kudos to #TestKitchen for standing their ground. https://t.co/a6TjbwVfgu

I hope she spends some time in jail.
We should be proud of the restaurants that ask customers for their vaccination proof. It's them being responsible. https://t.co/tBllhSGwic

A user also said that the womanâ€™s constitutional rights were not challenged as certificates assured that the person was safe for others to be around. She added that the woman was â€˜defamingâ€™ activists everywhere.

Making a travesty of our privacy rights & the Constitution too, to boot.
Vaccination cards are public docs, indicating you have been safeguarded by the best available tech,it's not your private information.
But what I'm seething at, is the way she's defaming activists everywhere. https://t.co/W0EFkYBtzW

A user wondered where the video â€˜Karenâ€™ made was and what point she was trying to make with it.

I just wanna know where the video Karen made is https://t.co/a7sjBtmGO5

One user denied that she was a â€˜Pakistani Karenâ€™, instead said that she was the original American Karen, who operated in the wrong country.

This lady however doesn't fit a "Pakistani Karen" description. She is the OG American Karen, just Karening in the wrong country. https://t.co/mdUBYzBdjD

Although the exact origins of the word are unknown, â€˜Karenâ€™ jokes became a part of the internet sometime last year. The word was typically used to denote microaggressions against Black Americans and misusing white privilege over marginalized peoples. It has now come to incorporate anti-vaxxers as well.