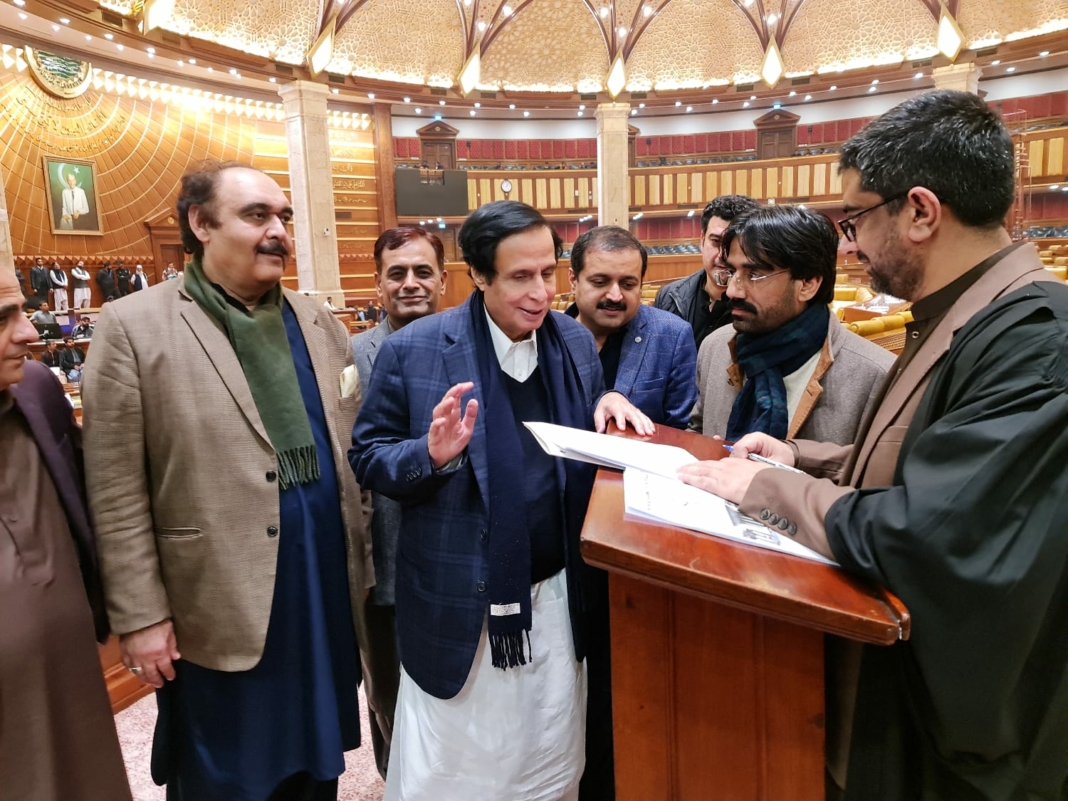 Punjab Chief Minister Parvez Elahi yet again won the much-awaited vote of confidence in the Punjab Assembly on Thursday after lawmakers sitting on the treasury benches entrusted their trust in him in the post-midnight vote, with the opposition boycotting the session in protest after tearing up the agenda copies.

The provincial chief executive took the confidence vote after the Lahore High Court (LHC) ruled that the governor had the authority to ask the chief minister to seek the trust of the house even during an ongoing session.

The court, earlier in the day, had said that the chief minister should have the support of 186 lawmakers — the required number for being elected the CM. After the strong protest, the opposition lawmakers walked out of the Punjab Assembly as they failed to stop the vote of confidence process.

The opposition lawmakers staged a violent protest to interrupt the Punjab Assembly’s session after the submission of a resolution by the Pakistan Tehreek-e-Insaf (PTI)
Members of the Provincial Assembly (MPAs) for conducting the vote of confidence.

The opposition MPAs threw chairs at the government lawmakers and surrounded the PA speaker’s dice. However, the security officers stopped them from reaching Speaker Sibtain Khan’s dice.

Speaker Sibtain Khan announced that Punjab CM Parvez Elahi successfully took the vote of confidence. CM Parvez Elahi thanked the PTI, PML-Q and independent MPAs for exhibiting confidence in him. He said that the Punjab governor’s de-notification order was illegal and unconstitutional.

Earlier, the assembly session was resumed late Wednesday night to conduct the voting for showing confidence in Parvez Elahi after completing the required number of MPAs. PTI MPA Mian Aslam Iqbal and Raja Basharat submitted the resolution for the voting.

Talking to reporters outside the assembly building, Interior Minister Rana Sanaullah said the proceedings were extended for 7 to 8 hours, while the second agenda was issued after midnight. He said that the action was against the rules and constitution. He said that the ruling coalition of the province had said after consulting their lawyers that the governor’s order was unconstitutional.

He said that the matter was being heard in court. He said the proceedings were initiated fraudulently and they would not accept it. The interior minister also said that it was a fit situation for the imposition of the governor’s rule in the province. He said lies were told during the assembly proceedings.

He said the PTI had opted for a different point of view in the court and had changed that in the assembly, after which the process of bogus counting was started. He added that Elahi had given an oath to the disgruntled members that he would not dissolve the
assembly. He said that the PML-N and the PPP were falsely blamed for horse trading.

Ata Tarar blamed the speaker for crossing the extremes of partisanship with the PTI. He said that they would take the matter to court. Malik Ahmad Khan at the moment said that rules had been bulldozed regarding the vote of confidence. He said that this was the worst incident in Punjab Assembly’s history. He said that polling agents were not appointed as per requirement.

Talking to a private news channel, Sheikh Rashid noted that he had no information regarding the vote of confidence. “The PTI chairman said he will cross the red line and he will definitely do it.”

He further said that if Imran Khan wanted Punjab CM Parvez Elahi to dissolve the assembly, he would dissolve without having a second thought.