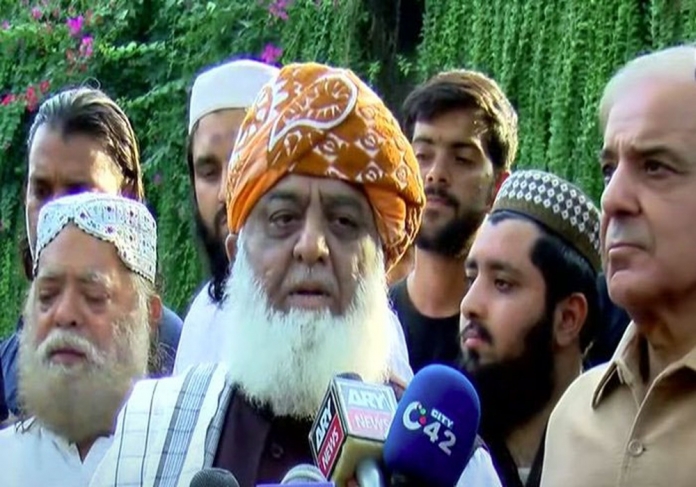 At a press conference after a PDM meeting in Lahore, Fazl said that the alliance was going to reach out to the government’s allied parties to bring them around to joining the opposition so a majority of votes could be achieved against Prime Minister Imran Khan in the National Assembly. He said they would try to convince the allies that siding with the government was not in the best interest of the country.

Fazl said that they were preparing for the no-confidence motion and would first finish their “homework” before speaking about a set timeframe to bring the motion forward after being repeatedly asked for a date for the vote. He added that PDM was announcing the intention of a no-confidence motion because it was a definitive one at this stage.

He further added that the no-confidence motion would be moved everywhere the PDM got a chance, except for Sindh where Pakistan Peoples Party (PPP) was in power.

Sharing his views about PPP, he said that he would not say anything against PPP in public as it could hit that party and could also damage PDM’s cause. “The situation is changed now and decisions are made according to the situation. There was lack of consensus last time when PPP was in favor of no-trust motion,” Fazl said.

Talking about the planned long march of PDM on March 23, Fazl said that it was still intact and the steering committee would make arrangements for it.

According to Fazl, they would not contact any individual to buy their loyalty to support the no-confidence motion but those individuals would be welcomed who would contact them. If the government allies do not agree, we’ll sit again to chalk out a future strategy to meet the number game required for the motion, he said.

When asked about the post no-confidence scenario, Maulana said that he was not going to show his cards now.

PML-N President and Leader of the Opposition in National Assembly Shehbaz Sharif said that he doesn’t know the exact date of the government’s ouster but one thing was clear that the opposition would try hard to get rid of the incompetent rulers who had failed miserably to provide relief to the masses.

When asked whether Shehbaz was playing any role to become a bridge between the PPP and Fazl, the PML-N president said that Fazl’s relations with PPP were older than him.

Maryam meanwhile avoided speaking to the media as she said that elders had already spoken.