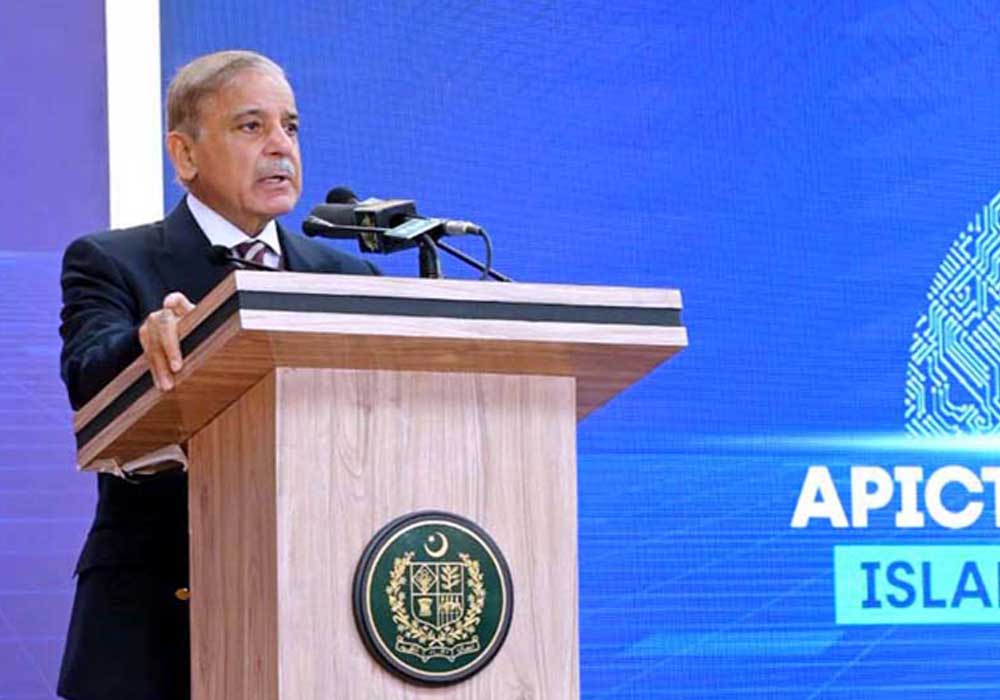 Prime Minister Shehbaz Sharif on Wednesday said Pakistan had enormous untapped potential in the information technology (IT) sector and invited foreign IT companies and experts to fully explore the indigenous talented youth bulge of the country.

The prime minister was addressing the inauguration ceremony of the 21st Asia Pacific ICT Alliance (APICTA) Awards 2022. The event was organized by the Pakistan Software Houses Association (P@SHA) and the TechDestination for IT and ITES, in collaboration with the Ministry of Information Technology and Telecommunication (MoITT). The prime minister said that no doubt, in the last decade or so, Pakistani entrepreneurs had made great strides to promote the IT sector with individual and collective efforts. The government was also playing a proactive role to support the efforts.

Given the youth potential, he said, out of the total population, 60 percent of the country’s population comprised of youth. “This is a challenge as well as an opportunity to covert this potential into opportunity,” he added. The prime minister said Pakistan possessed huge potential to increase its IT export. The country’s total IT export hovered around $2.6 billion, which did not fully reflect the immense talent. Pakistan had the huge strength to enhance the target to billions of dollars, he observed.

He mentioned that he had chaired a number of meetings to mull how to galvanize the youth and enhance the IT sector. He said they had concluded that a target of around $5 billion dollars annually in IT export could be easily achieved, adding he had invited the IT experts and the youth to come forward and carve out a plan to achieve the target. The ceremony was attended by Minister for Planning Ahsan Iqbal, Minister for Information and Broadcasting Marriyum Aurangzeb, officials and a number of delegates, IT experts, and representatives of companies.

The prime minister elaborated that during his tenure as ‘Punjab’s Chief Servant’, he promoted IT with various initiatives, taken in a big way, in the health and education and revenue collection sectors. He said they also provided laptops to the high achievers. Besides, booklets were also distributed among the students and teachers all over Punjab, he added. By all accounts, the prime minister said, it was a very good exercise taken by his government in the province.

The prime minister said more than 19,000 ICT companies were currently registered in Pakistan, comprising domestic and export-oriented enterprises spread over 160 cities across Pakistan. Pakistan’s ICT industry was exporting state-of-the-art products and services to 169 countries and territories, he added. The prime minister expressed confidence that the forum would provide huge impetus to their efforts to boost the IT sector.

He said Pakistan actively solicited and advocated enhanced cooperation and collaboration in the ICT sector with APICTA members. “Let’s work together at an enhanced pace to reduce the digital divide amongst our member countries and enhance the growth of ICT Industry and technology trade amongst the 16-member APICTA countries,” he added. He also appreciated APICTA Chairman Stan Singh-Jit for voting and supporting Pakistan to host the event. He said it was a great honour for Pakistan to host the awards for the first time.

The event is being attended by 16 economies of the region, with more than 150 foreign delegates from Malaysia, Australia, Singapore, etc. Recognized as the ‘Oscars of the Asian IT industry’ and popularly called the APICTA Awards, the 2022 edition is being held in Islamabad, from December 7-11.

The minister said Pakistan had an open-door policy with numerous facilitations for foreign companies and investors. Chairman APICTA, Stan Singh-Jit, in his speech, said that he had voted for holding of the awards event in Pakistan because the country had never hosted such an event and had great talented people in the IT sector.

Also, Prime Minister Shehbaz Sharif on Wednesday appreciated the positive trajectory in the bilateral relations between Pakistan and Qatar. He also congratulated the Qatari leadership for the successful hosting of the FIFA-2022 World Cup in Qatar. The prime minister was talking to Ambassador of the State of Qatar in Pakistan Saoud bin Abdulrahman Al Thani who called on him, PM Office Media Wing said in a press release. Shehbaz lauded the remarkable reforms undertaken by the state of Qatar in the field of labour. The prime minister remarked that Pakistan felt pleased and honoured to assist the country by providing security personnel for the FIFA World Cup 2022.