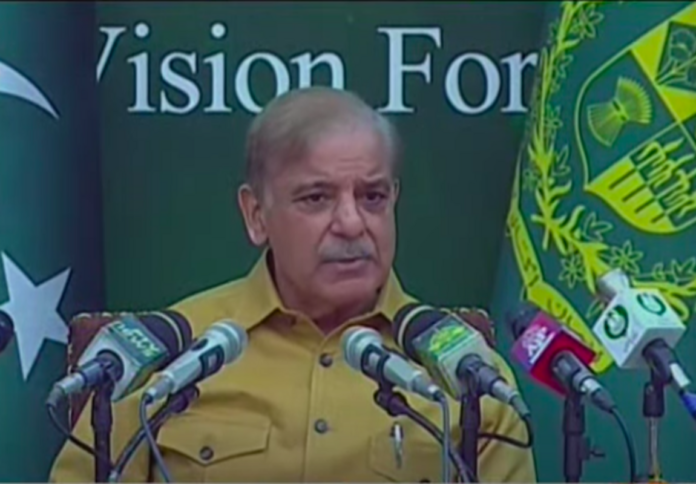 Shehbaz Sharif has demanded the Chief Justice of Pakistan (CJP) to form a full court commission for the investigation of the attack on Imran Khan and said everyone including him will appear before the court for cooperation.

He said that he will in writing send a request to the CJP for the formation of a full court commission to bring facts to the people. He said that it was mandatory that the matter should be investigated in detail to bring forth the truth to the nation for the best interest of the country. He also said that if the investigation would not be made in-depth then questions will continue to rise.

He also said that he had himself formed a commission for slain journalist Arshad Sharif and spoke to Kenyan President personally for a thorough investigation. He again requested the CJP to form the same full court commission on the matter so that answers to all questions could be brought forward.

Prime Minister Shehbaz Sharif has said that Imran Khan has stood up against his own institutions and was trying to attack the army just like an enemy of Pakistan. He further added that India was happy over the narrative that how he alleged the Pakistan army.

He said that Imran Khan was continuously lying to the nation in an effort to take the country towards a new low level. He also said that the diamonds and jewellery received by Imran and his family were proof.

He said that Imran Khan had offered the army chief an extension just to save his government and now he has been trying to derail the country. He said that now that his government has been ousted constitutionally then he has started targeting the army.

Addressing the press conference in Lahore he said that it was blamed and accused that Prime Minister Shehbaz Sharif, Interior Minister Rana Sanaullah and an officer of the institution were involved in the attack. He said that he along with all political leaders condemned the firing incident on the PTI march.

PM Shehbaz also questioned the delay in the registration of FIR of the attack on Imran Khan. He said that the lodging of FIR was delayed to create more misinformation and chaos. He demanded Imran bring forward proofs against the three he had accused. He said that if Imran could get registered an FIR of his own will then why the delay was caused?

Shehbaz Sharif also questioned the going of Imran Khan to a charitable hospital for treatment after travelling hours instead of a nearby government hospital for medico-legal procedure as per the law.

He said that the interior ministry has been directed for a detailed investigation and cooperation with the provincial government as much as possible as there was no place for such baseless allegations. He said that Imran Khan was taking the country towards anarchy.

The premier added that he was informed that there were security threats and that Imran Khan was conducting rallies and gatherings and the said information was shared with the Punjab government. He said that we have been blamed for an attack on him but they are in the government in Punjab.

The premier said that once again lies were spoken but there was no place for such blame-game in the country. He said that the worst allegations were lamented in media talks of the previous few days. He said that he had announced the Kissan package just before going to China further adding that progress has been started as a result of their China visit.

Old videos of Imran Khan’s statements and some of the leaked audio were also aired during the press conference. PM Shehbaz said that fake cases were started against him using former chairman NAB but their lawyers did not appear before the courts just to cause delay. Videos of accidents during the long march and PTI’s protests were also aired. PM Shehbaz also targeted Imran for not going to the funerals of his close ones like Naeem-ul-Haq.

Shehbaz said that he has many secrets of foreign policy that will remain hidden in his heart. He will not destroy foreign policy and relations with countries. He said that Imran Khan has always made baseless accusations against his opponents.

He said that the nation has come to a point where truth was needed to bring forward to the people of Pakistan. He also said that earlier Imran had said that four people were behind the plan of his assassination and now he is taking the names of three.

PM Shehbaz further said that Imran Khan had always spoken against the people whom he had called very honest and responsible earlier including the Chief Election Commissioner Sikandar Sultan Raja.

Later responding to questions PM Shehbaz said that he has requested a full court because the allegations being levelled were of serious nature and it was necessity of time to form a full court commission so that the menace of anarchy could be eradicated from the country.

Answering questions regarding the attack on Governor House Lahore he said that was a gruesome activity and the people behind that should be brought to justice.