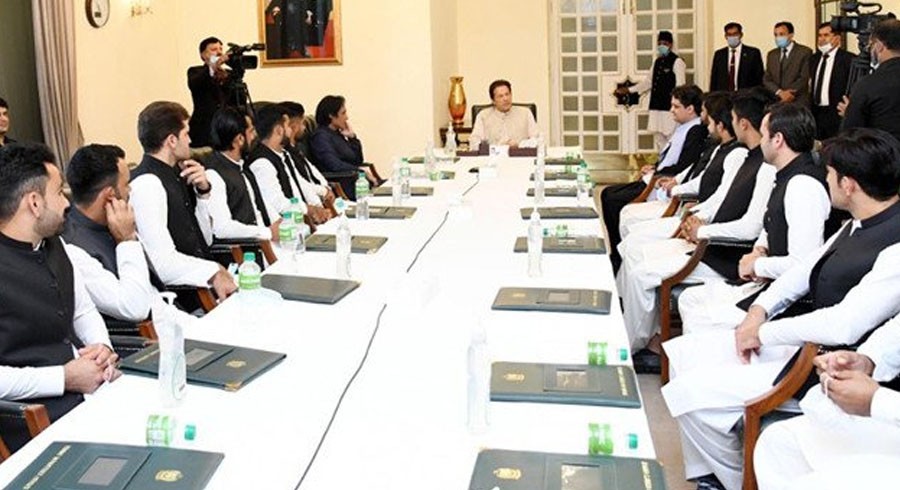 Prime Minister Imran Khan met with the Pakistani T20 cricket team at the Prime Minister’s office on Wednesday to bolster their morale ahead of the T20 World Cup, which will be held in the UAE in October-November.

Pakistani players wore traditional white shalwar kameez with blue vests to the Prime Minister’s Office. The Chairman of the Pakistan Cricket Board (PCB) was also present.
Despite the postponement of the New Zealand and England tours, Prime Minister Imran advised the players to keep their spirits up ahead of the World Cup.

According to sources, the premier encouraged the players to play aggressive cricket during the world cup, advising players that they should seek retribution with their performance after two important tours were cancelled. “Pakistan is a secure nation. You should concentrate on enhancing your results. Pakistan will host international cricket soon, God willing “PM Imran was quoted as saying to the players. Imran Khan instructed the team to play like “cornered tigers,” like he did when Pakistan won the 1992 World Cup under the captaincy of the prime minister himself.

Sources said that the premier had special directions for captain Babar Azam. “You must lead the team from the front, take everyone along and play like lions,” he urged Babar.
He also told players not to panic (ghabarana nahi hai) – the premier’s famous remarks often quoted in national and social media.

Speaking to the media after the meeting, Senator Faisal Javed said that the prime minister asked the players to play fearless cricket against India and capitalise on the chances provided by the rival team.

He quoted PM Imran as saying to the players that they can only put in hard work and Allah will give reward for it. Faisal said that the premier also insisted on merit-based selection.
Assistant to Prime Minister on Political Communication Shahbaz Gill, speaking on the occasion, said that PCB chief Ramiz Raja during the meeting said that Pakistan won 21 out of 22 matches against India under the captaincy of Imran Khan
He said that the premier also lauded the batting technique of Babar Azam. The captain is a very important person in a cricket team and a good captain can built a winning unit under his wings, Shahbaz quoted PM Imran as saying to Babar.

The national team has also won a T20 world cup under Younis Khan and the Champion’s Trophy under Sarfraz Ahmed, defeating arch-rival India in the finals. The meeting between the cricket squad and the premier came days after the cricket teams of New Zealand and England cancelled their tours of Pakistan. The NZ team had left their tour hours before the start of the first ODI match in Rawalpindi whereas the England Cricket Board had called off the tour weeks before it began.