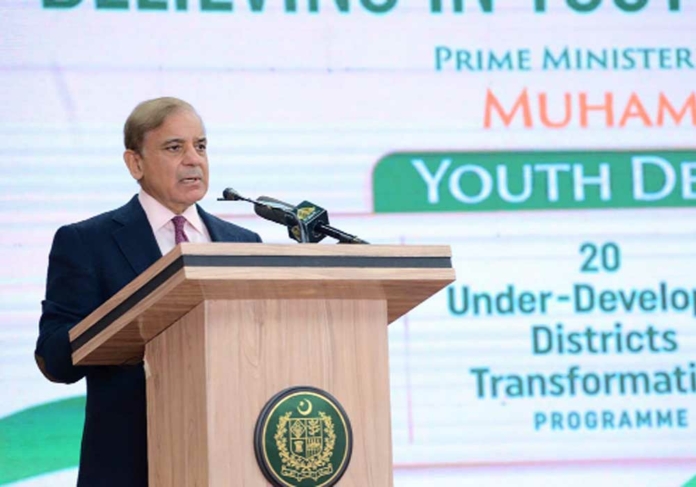 Prime Minister Shehbaz Sharif on Thursday said he was willing to talk to the PTI for the “sake of national interest”.

Addressing the launch ceremony of Youth Development Initiatives in Islamabad, the prime minister said: “You didn’t shake hand for four years and now you’re saying to ‘come to talk with us’? Till when will this two-facedness continue? But, we will be ready for it for the sake of national interest.”

Declining to give any details, the prime minister said he was ready to give “any sacrifice” for keeping the national interest as the primary concern.

No wheat import by private sector

Separately, the prime minister urged Punjab and Khyber Pakhtunkhwa to rise above politics and join the government’s scheme of providing wheat seeds to farmers of flood-hit areas.

Chairing a review meeting the of National Flood Response and Coordination Centre, he offered the two provinces to collaborate with the Centre under the scheme which would ensure funding for wheat seeds with 50 per cent contribution from both sides.

The PM mentioned that Sindh and Balochistan had already agreed with the wheat scheme.

“I request you to accept the offer in view of the plight of the flood-hit farmers. And if you still reject it, then don’t twist the facts that Centre is not extending assistance,” he said in a meeting also joined by chief secretaries of Punjab and KP through a video link.

Shehbaz Sharif emphasized that Pakistan as a federation comprised its provincial units and said the situation demanded unity at national level.

He feared reduced produce of wheat the coming season owing to post-flood situation and rejected to allow any import of the commodity by the private sector.

“In view of emergency situation, I will not allow the private sector to import wheat,” he said, adding that the government was aiming to get a better bidding of the wheat.

Prior to the prime minister’s statement, Pakistan Muslim League-Quaid leader and former federal minister Moonis Elahi, son of Punjab Chief Minister Parvez Elahi, alleged on Wednesday that the federal government had denied the province its share in wheat and wasn’t even allowing it to import the crop.

“The federal government under Shehbaz is persecuting the people of Punjab. They have denied us our share in wheat and are not allowing us to import. Wheat crisis is being engineered in Punjab,” he tweeted, adding that CM Parvez had “written to them hoping better sense will prevail”.

The tweet had a photo of a letter addressed to PM Shehbaz, in which CM Parvez informed him of the impending wheat shortage in the province and sought his intervention.

The CM said the provincial government had sought wheat from relevant departments multiple times in the recent past, but to no avail. He warned of Punjab’s wheat stock likely depleting by February 2023 and urged the premier to approve one million metric tons (MMT) of wheat for Punjab and instruct the Ministry of National Food Security to “immediately provide” 0.3MMT to the province through the Pakistan Agricultural Storage and Services Corporation.

“The remaining requirement may be fulfilled in due course of time as and when needed,” he said.