No case of Omicron variant BF.7 detected so far in Pakistan 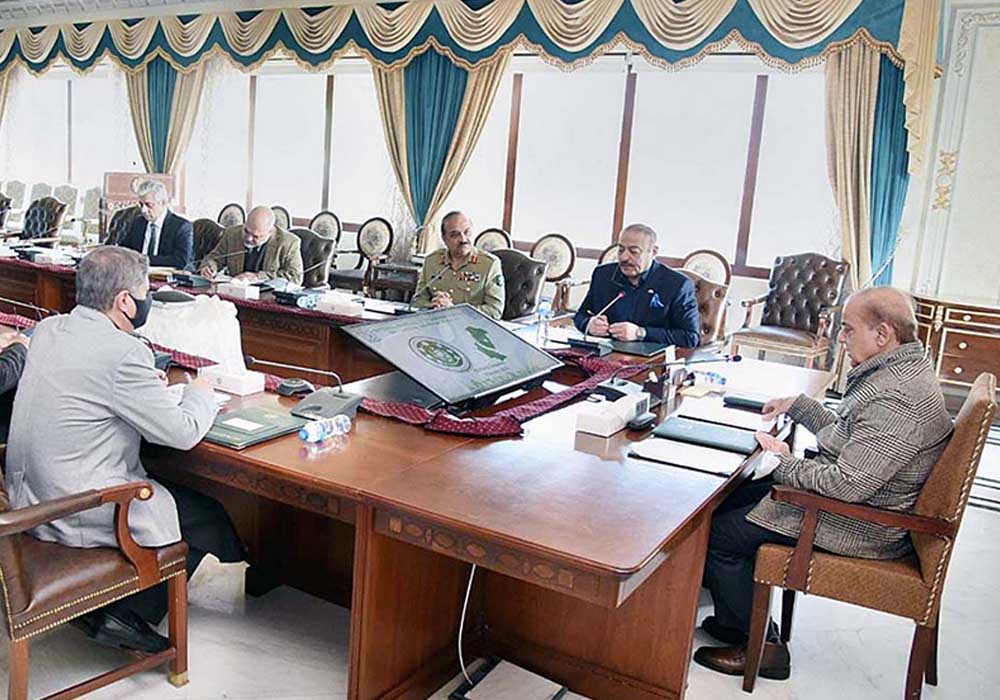 Expressing satisfaction over the COVID-19 situation being under control in Pakistan, Prime Minister Shehbaz Sharif on Tuesday directed the authorities concerned to ensure the vaccination of children aged 5-12 years on an urgent basis.

The prime minister, who chaired the meeting to review the COVID-19 situation in the country, instructed to further improve screening at border points as well as airports. He also sought a report on a third-party evaluation of the screening process at border points and airports. He said it was pleasing that no COVID-related death was reported from across the country in the last 15 weeks and said the whole nation was thankful for the countries which had donated vaccines to Pakistan.

The prime minister said the decline in the ratio of COVID infection was pleasing but “we have to be alert all the time.” He appreciated the efforts by the NCOC and other relevant office bearers for containing the spread of COVID. During the meeting, the prime minister was briefed about the current COVID situation, new variants, ongoing efforts, and the status of vaccination. It was told that Pakistan apparently faced no threat from the new variant as almost 90% of the population was fully vaccinated and 95% partially vaccinated.

Around five million children of 5-12 years of age have been vaccinated which was 25% of the total strength and the target of full vaccination would be achieved within the next few months. The meeting was told the infection ratio of 0.2 to 0.5% average was reported in the country. The participants of the meeting were told that an effective mechanism was in place at the borders to contain the spread of COVID. Moreover, the ratio of random sampling at the airport has been increased to 2% besides ensuring the fumigation of the planes coming from the affected countries.

It was told that Pakistan was among very few countries where genomic surveillance of COVID has been introduced to ensure early detection of the new variants. The prime minister also appreciated the efforts by the NCOC, the officers of the Ministry of National Health Services and the officials of Civil Aviation to contain the spread of the virus. The National Institute of Health (NIH) on Tuesday clarified that no case of Omicron’s sub-variant BF.7 is detected in Pakistan so far.

According to the spokesperson of NIH, since its appearance, a total of 29 cases of XBB (Omicron) have been reported from Pakistan and made it clear that this is not the BF.7 variant which is spread in the neighboring country. Clarifying the news circulating about the new COVID variant, the spokesperson said that such news was not accurate as the reported variant in some areas of the country is XBB which is an old variant of Omicron.

Based on observations, BF.7 is more contagious than other sub-variants of Omicron but less virulent. Infection with BF.7 has a much lower risk of hospitalization and severe Covid. However, BF.7 infection can be severe in those with high blood pressure, kidney diseases, diabetes, or other comorbidities and in those aged over their sixties. According to health experts, BF.7 is a sub-lineage of the Omicron variant – the dominant variant circulating globally of the Sars-CoV-2 coronavirus. It has a 4.4-fold higher neutralization resistance than the original D614G variant.

At least six Karachi residents on Tuesday were confirmed to be infected by the XBB and XBB.1 Omicron variants of Covid-19, the health department reported. According to the details, the sequencing was done by Agha Khan Hospital — one of the major private health facilities of the provincial capital. The health department also revealed that the confirmed cases had been detected in residents of Defence Housing Authority, Shadman Homes and Tariq Road. “All patients are in stable condition,” the Sindh health department’s spokesperson said. It added that none of the eight patients had a “travel history of China”.

According to NIH Islamabad, XBB is a variant of Omicron, and 20 cases have been detected in Pakistan, which it claims is not “a point of concern of global health”.

“No cases of a new variant of Covid have been reported,” the NIH official said while adding that all “arrangements have been completed to combat the new variant” should a case emerge.

Lifting of the lockdown in China and free travelling have increased the risk of a new Covid variant entering Pakistan.

According to a National Command and Control Centre (NCOC) official, new variants have also come in the past, but they were controlled in time. “We are fully prepared to tackle and control any variant.”

Reports suggest the coronavirus strain spreading in China is a sub-variant of the highly infectious Omicron variant: BF.7 or BA.5.2.1.7.

Meanwhile, at least 29 Omicron infections have been reported in a week across the country as reports of a new wave of Covid have emerged.

Of the reported figures, however, all cases are of the older XBB subvariant and no BF.7 cases have so far been detected.

According to the NIH, the present positivity rate stands at 0.40per cent with 15 positive cases.