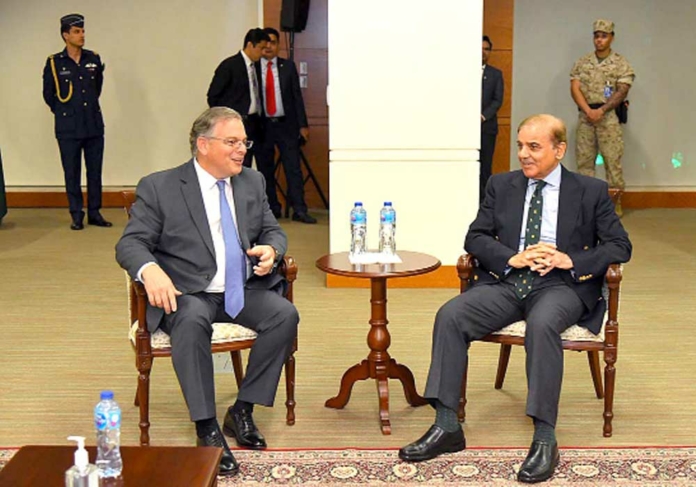 Prime Minister Shehbaz Sharif has urged the United States not to see relations with Pakistan through the lens of Afghanistan or China, saying that the ties between the two countries should stand on their own.

The premier expressed these remarks while attending a diplomatic reception held at the US Embassy in Islamabad on Thursday to commemorate the 75 years of relations between Islamabad and Washington. The reception started with a one-minute silence to express condolence over the death of people and convey grief to those who had lost their livelihood in the devastating floods. The federal ministers and US Ambassador in Pakistan Donald Blome attended the reception.

“We really want to build and reset these relations back to normal and friendly relations based on trust, respect and mutual understanding. Of course, there is a file on your part and a file on our part but if we have to move forward, and we must, then I’m we can find ways and means to warm up our relations to levels we have seen in the past,” PM Shehbaz said while addressing the ceremony. He also said that the US should not see relations with Pakistan through the lens of Afghanistan or China as they should stand on their own.

“When Pakistan was facing the worst kind of outages, [then] prime minister Nawaz Sharif decided to spend from our own scarce resources to invest [in] another 5,000 MW [of electricity]. Finance minister Ishaq Dar opposed tooth and nail… he said I don’t have the money… he had his own pertinent point. PM Nawaz thought on top of what we’re getting on CPEC projects. He said let’s not delay it because if there is another dharna the CPEC programme will be derailed and by the time of the 2018 election, we wouldn’t be able to show anything to the people of Pakistan,” he added.

Premier Shehbaz said that as a result of that decision [we got] 5,000MW [of electricity and out of that 3,500MW was installed by GE. “The plants were installed in the fastest possible time,” he lauded. The prime minister said that he was the most ardent supporter of the friendship between Pakistan and the United States. “Let bygones be bygones… as long as we have serious dialogues, we cannot go wrong.” Talking about his recent trip to Washington, PM Shehbaz said that he had many productive meetings in the US including with President Biden and Secretary Blinken.

“I had thanked them. I thank them again [here]. I thank them for the programme they announced for the flood-affected people,” he said. “Had we used $32 billion [given by the US to Pakistan in the past] in the right direction and properly supervised, we would’ve broken our begging bowl,” he added. Talking about floods in Pakistan, PM Shehbaz said that the disaster was not made by Pakistan as it is a developing country.

“Pakistan is a very strong nation. People are very hard working. Our population is 50 per cent male and 50 per cent female. There is complete freedom of action. The US are our biggest trading partner,” he said.

“This catastrophic situation is not made by us… it is manmade but not by us. 1,600 people have left this world including 400 children. More than a million mud houses have been thrown into the Arabian sea. People are living under the open sky waiting for help. It is my duty [to help] but whatever we do will not be enough.” He requested the US and the international community to stand by Pakistan during this difficult time. “This is our right. We have not brought this upon us,” he added.

“We want to go back to those wonderful times when our relations with the US had their own standings. I would work most willingly for those relations,” he concluded. In his address earlier, the US ambassador said that the people of the United States continued to stand with Pakistan. The strength of the bilateral friendship is demonstrated by the more than $66 million in US support for flood response. “We are doing what friends and partners do – support each other when it’s needed most… Our partnership has been advantageous to both countries,” he remarked according to a US embassy press release.

Over the decades, more than $32 billion dollars in US support benefited Pakistan and improved the lives of the Pakistani people, the ambassador added. On the occasion, US Ambassador Donald Blome also met the prime minister and discussed the matters related to bilateral relations and cooperation.