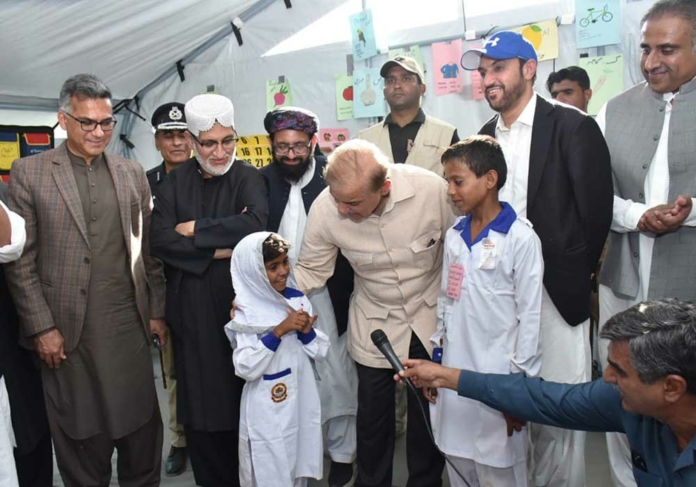 Prime Minister Shehbaz Sharif on Monday directed the officials take urgent steps to drain floodwaters from the flood-hit areas of Balochistan with the assistance of officials of the Sindh government to prevent any outbreak of water-borne diseases.

The prime minister issued the instructions during his visit to the flood-hit areas of Sohbatpur as he arrived in district Khuzdar on a day-long visit to review the arrangements of relief and rehabilitation by the provincial government as well as other government agencies. Sharif proposed taking onboard the water engineers and hydrologists to recommend suggestions in line with the post-flood studies. He also directed the officials to remain in constant touch with their counterparts in Sindh so that floodwaters could be drained out as soon as possible both to avoid another outbreak of various diseases and to enable farmers to cultivate rabi crops.

He feared that epidemics and diseases could become a bigger challenge if the floodwaters took months to recede and if sincere efforts were not made by the officials. He ordered availability of drinking water to the flood-affected people. For the next crop season, he said, arrangements for the distribution of seeds to locals were in progress and added that Rs5 billion have been disbursed among the flood victims of Balochistan under the Benazir Income Support Programme (BISP+ as each household was given Rs25,000 to meet their needs).

The prime minister said to facilitate the flood-struck population, the government had exempt charging of 300 units in electricity bills during August and September. He also interacted with patients at medical camp set up for flood victims and inquired the staff about the availability of medicine including the anti-malaria vaccine. Shehbaz Sharif intermingled with the students at a makeshift school and assured them that the government would construct a model school for them in two months equipped with modern facilities.

The Chief Secretary Balochistan briefed the prime minister about the ongoing relief and rehabilitation activities carried out in the flood-hit areas of the province. He said heavy machinery was at work in five districts of Balochistan to reconstruct the damaged infrastructure and clear pathways and roads damaged by floods. It was told that regular sprays and fumigation were being carried out to contain any possibility of epidemics in the flood-affected areas. Earlier, Shehbaz Sharif took an aerial view of the inundated areas of Balochistan and Sindh.

Meanwhile, Balochistan Chief Minister Mir Abdul Quddus Bizenjo Monday said that federal and provincial governments were utilizing all available resources to normalise life in the flood-affected areas of the province and to ensure the provision of health education and clean drinking water to the victims. He expressed these views during a briefing given on the occasion of Prime Minister Shehbaz Sharif’s visit to Suhbatpur in Balochistan. Balochistan National Party- Mengal (BNP-M)’s Chief Sardar Akhtar Jan Mengal, Provincial Minister Mir Muhammad Khan Lahri, Member of Provincial Assembly Mir Saleem Khosa were also present on the occasion.

Balochistan Chief Secretary Abdul Aziz Uqaili briefed the Prime Minister and Chief Minister Balochistan about relief activities to flood victims in the areas in detail. The Chief Minister said that the provincial government had launched a program costing Rs.16 billion to rehabilitate the farmers of the affected areas under which the cultivators would be given subsidy on solar energy, seeds and fertilizers to help them get back on their feet.

Quddus Bizenjo said that the provincial government had also requested the federal government to support the program in order to ensure relief for flood victims. The Prime Minister announced immediate release of 10 billion rupees for the program. The Chief Minister also thanked the Prime Minister for his special interest in the rehabilitation of flood victims of Balochistan and announcing Rs.10 billion on immediate basis.