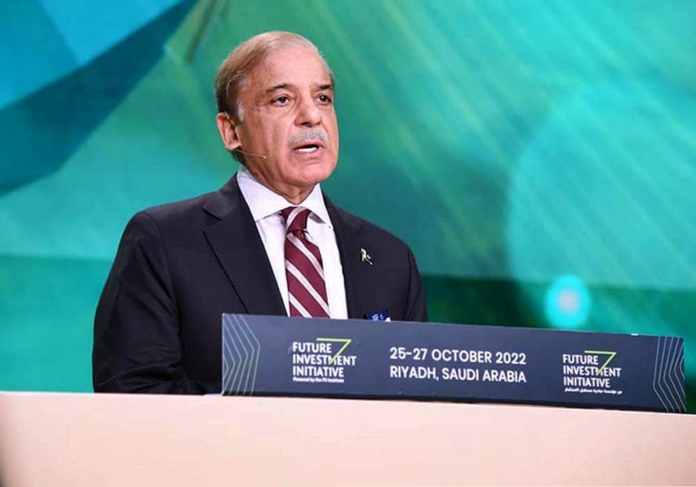 Prime Minister Shehbaz Sharif Tuesday said Pakistan was “ripe” for market innovation as its new generation of entrepreneurs were turning their energy and focus toward disruptive innovations and keeping traditional businesses at bay.

The prime minister’s comments came during his attendance at the Future Investment Initiative Summit in Riyadh, Saudi Arabia. “I am fully prepared to invest the resources of my government in providing the young generation an enabling environment for innovation,” the premier told the summit. PM Shehbaz is currently in Saudi Arabia on a two-day visit to attend the “Davos in the desert” summit – an initiative of Saudi Crown Prince Mohammad bin Salman to expand the Kingdom’s role beyond oil in the global economy.

The premier urged businessmen, present at the summit, to invest in Pakistan’s innovative business opportunities. He added that despite Pakistan’s infrastructure development needs being huge, the coalition government is upgrading rails, ports, airways, water, gas, power, and digital infrastructure. “With a young and growing population, the market is expanding. Our government is enabling private enterprises to drive the economy. The government is investing in public goods; these too are available for partnerships. I invite you all to participate in these and assist me in unlocking Pakistan’s potential while earning profitable returns on your investment,” he said.

PM Shehbaz proposed that the summit should consider establishing a satellite centre in one of Pakistan’s leading universities to explore the rapidly growing Pakistani market and spur entrepreneurial innovation among our young population. “The satellite could become the centre of a network of researchers, innovators, investors, and service providers to harness the capacities which, if optimised, would take Pakistan to a higher level of social and economic development,” he maintained.

At the outset of his address, the premier said that nothing could be of more importance than this very challenge: how to ensure that our collective tomorrow is better than our today. “We are ready for it; we have the tools, skills and technology which enable us not just to navigate the complex world of tomorrow – but to also shape it today in a manner that has the most beneficial impact on humanity. “We are living through truly transformational times. Throughout history, such times have triggered political, social environmental and economic changes. These changes have been powered by imagination, innovation and action. Bold, decisive and consequential action.”

The premier claimed that the pace of transformation and change was never as swift as it is today. He said that with the power of technology driving the world towards a future few could imagine in the past, “we are well positioned to harness the dynamics of change.” He further added that tech power is a great equaliser. It can cut through social, cultural and financial barriers and empower those who are equipped to leverage it. “In Pakistan, I have seen with a sense of deep satisfaction how young women and men are crafting their careers – and boosting their earning power – by using tech in the diverse fields within the larger digital matrix like e-commerce,” he maintained.

“I believe Pakistan has uniquely placed to leverage this change. We have one of the youngest populations in the world. Most of these youngsters are equipped with the tools of the new digital world…their talent is already recognised as Pakistan is the fourth most popular country for freelancing,” he added. Prime Minister Shehbaz Sharif on Monday said that Pakistan was “ripe for market innovation” and the country was ready to reach out to potential investors for the future of its upcoming generations.

In an address at the Future Investment Initiative Summit in Riyadh – an annual feature since 2017 – the premier said Pakistan was uniquely placed to leverage dynamic technological changes. “We have one of the youngest populations in the world. Most of these youngsters are equipped with the tools of the new digital world. They are hungry for more skills and more opportunities. “Pakistan is the fourth most popular country for freelancing,” he said.

Today, a family in urban and rural Pakistan has access to mobile phones and the internet, they aspire for high education standards, they want to buy consumer products, and need everything from insurance to healthcare, PM Shehbaz pointed out. “Hence, the significance of this consolidated demand could be well appreciated and recognised by investors and entrepreneurs. “Pakistan is ripe for market innovation. A new generation of Pakistani entrepreneurs are shying away from traditional businesses and turning their focus and energies to disruptive innovations,” he stressed.