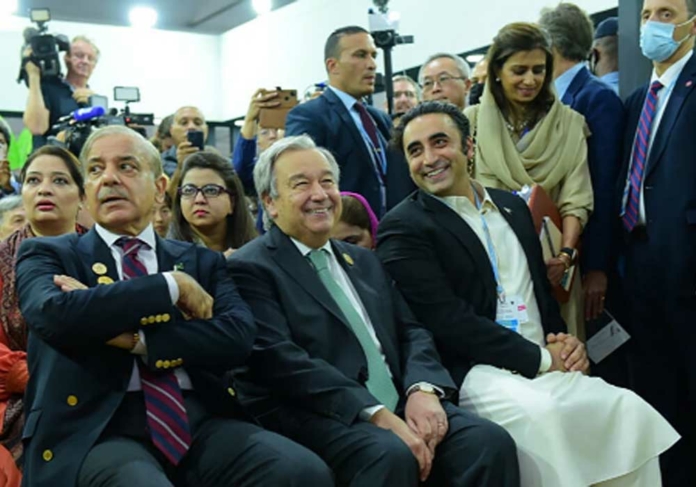 UN Secretary General Antonio Guterres on Monday appealed to the international financial institutions and G20 countries to provide debt relief to Pakistan to help its post-flood reconstruction and rehabilitation efforts.

Addressing a joint press conference along with Prime Minister Shehbaz Sharif here, the UN Secretary General proposed a debt swap, exchanging the payment of debt with investment in rehabilitation of the flood-affected people of Pakistan. Prime Minister Shehbaz Sharif who is in Sharm El Sheikh for the COP27 summit, told media that according to the latest estimates, Pakistan suffered losses of over $30 billion.

The UN Secretary General said that Pakistan was a middle-income country and was not given the kind of debt relief and concessional funding it needed to tackle the adverse impact of climate change. He appealed to the international financial institutions and the G20 countries to create a mechanism for debt relief for middle-income countries including Pakistan. He underlined the need for defining a clear road map to deal with the disaster, by creating an institutional framework of financing.

Antonio Guterres said an international donor conference will be held for Pakistan, as the country needed massive support for rehabilitation of the people affected by floods. The prime minister said the damages suffered in floods was also combined with a surge in poverty rates, with over nine million of our people being pushed into a life of extreme poverty, with an additional 1.9 million families being pushed into multidimensional poverty.

He said the impact on the GDP will be 2.2 % just from the flooding, but extreme climate events such as heatwaves, forest fires, and rapidly melting glaciers had already created a 9.1 percent drag on Pakistan’s GDP annually. Prime Minister Shehbaz Sharif said, “As a global community, we are poised on the threshold of a new green deal, or a trajectory to a 3 degree world, where returning to the earth we know today will be impossible.”

“Some countries like Pakistan, will be more exposed, more deeply vulnerable than others living in cooler longitudes.” He said millions of people in Pakistan were going into winter without shelter or livelihood that was their fundamental right. “Women and children are still looking to us to protect their basic needs, while entire villages are seeking to secure a precarious future, with all of such recovery hinging on a flow of resources that we are unable to guarantee.”

“Huge lakes of stagnant water have transformed the landscape of the south, where crops would have fed millions, and livestock would have saved families from destitution. We are picking up the pieces as we speak, but hundreds of bridges still lie broken, like the 8,000-plus kilometres of metalled roads ripped out like toothpicks from the fury of the raging torrents, triggered by the record-breaking floods from the monsoon on steroids.”

The PM said Pakistan’s own response was still defined by resourcing the huge humanitarian gap in relief and rehabilitation. “Our journey to recovery will be held back by increasing public debt, rising international energy prices and no real access to Adaptation Funds.” “Our social security platform, the BISP, has allocated urgent cash transfers worth 70 billion rupees (US$316 million) to the most vulnerable 2.8 million families, providing US$113 to each affected family,” he noted.

“We have mobilised every available resource towards the national relief effort, and repurposed all budget priorities, including resilience and development funds, to the rescue and first order needs of millions.” “A simultaneous priority is to build up our adaptation and resilience, without prejudice to our mitigation goals. At the same time, our reconstruction planning is also in its final stages. We will be looking to leadership of the United Nations Secretary General in building a viable support platform very soon at the Donors Conference.”