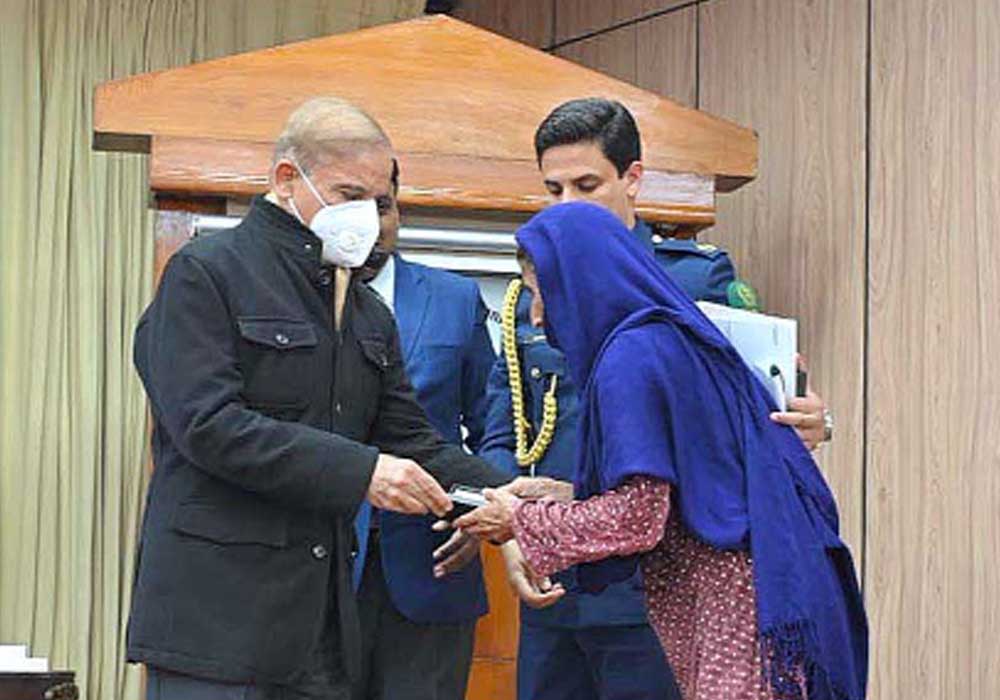 Prime Minister Shehbaz Sharif on Thursday appealed to philanthropists, including industrialists and expatriates, to support the government’s flood rehabilitation efforts by replicating the model of building100-unit prefabricated houses for flood victims.

Addressing the launching ceremony of prefabricated residential units in Tank and Dera Ismail Khan, the prime minister urged the affluent to adopt the flood-hit people of Balochistan and Sindh by providing them with infrastructure equipped with necessary facilities.

The prime minister in September had announced the construction of residential units for the people of Tank and Dera Ismail Khan, who were displaced by flashfloods in Khyber Pukhtunkhwa. The project worth Rs140 million was carried out as a gesture of philanthropy by Menzies Aviation and former special assistant to prime minister on aviation Captain Shujaat Azeem.

Shehbaz Sharif, who handed over keys of the residential units to flood victims, said that an accommodation comprising two rooms, a kitchenette and a toilet would provide relief to the displaced people.

He said that more people need to come forward and contribute towards replicating the same model villages and assist the government in amplifying its rehabilitation efforts.

The prime minister mentioned that the recent floods inflicted a huge damage to around two million houses, infrastructure and roads, however, he expressed satisfaction that the federal and provincial governments along with private sector were putting their best efforts to provide relief to the affected people.

He lauded the National Disaster Management Authority (NDMA) and the provincial disaster management authorities for carrying out relief and rehabilitation activities in the flood-affected areas.

He went on to say that the federal government disbursed had Rs70 billion among the flood-struck people in the provinces through the Benazir Income Support Programme.

Shehbaz said that the armed forces played an important role in reaching out to the people stranded in floods.

He also mentioned the support of friendly countries in extending assistance to Pakistan to help overcome the challenge of flood. Federal Minister for Planning Dr Ahsan Iqbal said that the federal and provincial departments and civil and military personnel demonstrated collaborative effort to overcome the challenge.

Through corporate social responsibility, he said, the government encouraged the private sector to contribute towards public welfare.

He said that the Jamiat Ulema-e-Islam would support the government in the interest of people.

Captain Shujaat Azeem said the initiative was significant to accommodate the people in distress. On the PM’s desire, he said, the model village would be replicated in other parts of the country.

Menzies Aviation CEO Moetesum Khurshid said the objective of the project was to handover residential units to the flood victims before the advent of winters.

He said the prefabricated houses could sustain harsh temperatures and were equipped with solar panels. A medical centre with available paramedic staff and a school have been set up in the premises.

The residential village has tube wells for clean water, where 9,000 indigenous trees have been planted.