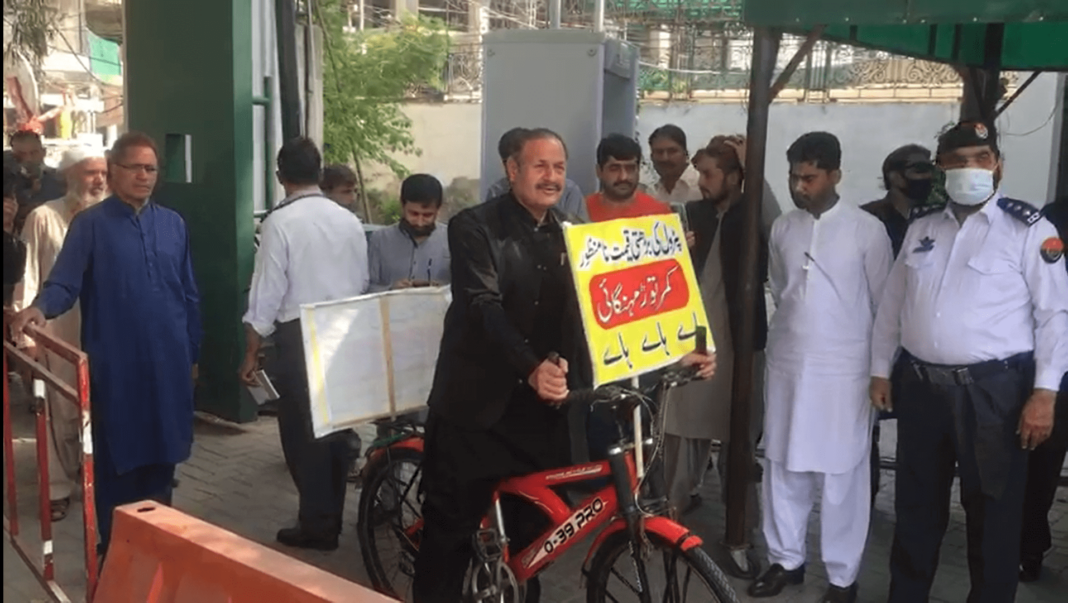 Members of provincial assembly (MPAs) of the Pakistan Muslim League-Nawaz (PML-N) on Tuesday lodged a severe protest against inflation and price hike outside the Punjab Assembly.

The MPAs chanted slogans against Prime Minister Imran Khan and Chief Minister Punjab Sardar Usman Buzdar for failing to control the prices of even the essential items.

Javaid stated, â€œThe petroleum prices are at a record high and people cannot afford fuel at this time of hyperinflation.â€

He added that he had decided to come to the Punjab Assembly on a bicycle and hoped that other MPAs would follow this trend as affording expensive vehicles was difficult.

He further stated that people were selling their bikes and cars while purchasing bicycles due to inflation.

The MPA said, â€œI thought that people will be using bicycles after some months due to non-affordability. But I prefer it now and borrowed this bicycle from my son today.â€

The women MPAs of PML-N including Azma Bukhari, Hina Pervaiz Butt and Sumaira Komal also protested against the inflation and price hike.

They were witnessed carrying kitchen items such as utensils. â€œThe life of a common man has become miserable during this double-digit inflation but our rulers are in a deep slumber,â€ said MPA Azma Bukhari.

She added, â€œOur protest will continue during the session in which opposition leader Hamza Shehbaz will deliver a hard-hitting speech against the poor economic policies of the government.â€

The speaker suspended the routine proceedings due to the death of MPA Nishat Khan Daha and prayers were offered for the departed soul.

Meanwhile, a resolution was also passed unanimously that demanded the declaration of the finality of prophethood oath in the certificate of marriages. The resolution, though brought out of turn, was jointly moved by PML-Qâ€™s Khadija Umar and PML-Nâ€™s Maulana Ilyas Chinioti.

â€œIt is necessary to differentiate between Muslims and non-Muslims, Ahmadis and Qadianis,â€ said the resolution. The house resonated with slogans of â€˜Allah o Akbarâ€™ and â€˜Ya Rasool Allahâ€™ soon after the passage of the resolution.