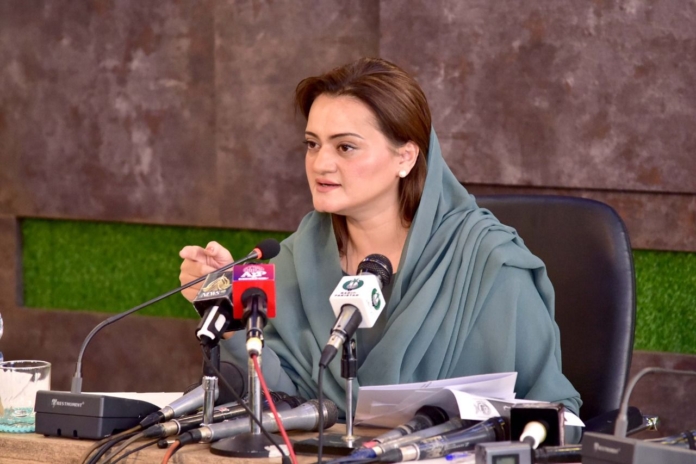 Information Minister Marriyum Aurangzeb on Sunday clarified that Tasneem Haider Shah – a man claiming to be PML-N’s spokesperson in London – had no link or anything to do with the ruling party and rejected startling allegations made by him.

Earlier in the day, video clips from Haider’s press conference started doing rounds on social media. They were also shared by several PTI leaders. In the clips, Haider alleged that PML-N supremo Nawaz Sharif was part of the plot to murder slain journalist Arshad Sharif and the assassination attempt on former prime minister Imran Khan. It is pertinent to mention here that the purported press conference was first aired by ARY News.

Responding to the allegations, Aurangzeb categorically said that Haider was not the PML-N London branch’s spokesperson and had no relation with the party. “No one should try to become [the] party spokesperson by force,” she said, adding that if Haider had any evidence regarding Arshad Sharif’s murder then he should present it before the forum of the joint investigation team. The information minister also challenged the ARY Network to air his press conference in the UK.

“They don’t broadcast fake news in Britain because they have already been fined for lying. “Forgery, lies and fake news cannot divert attention from Arshad Sharif’s real killers,” Aurangzeb said. Speaking to the Pakistani media reportedly in London, the purported member of the ruling party claimed that he has been a spokesperson for the party for the last five years in London. He claimed that he was part of the meetings with the PML-N leadership in London wherein he alleged that assassination plots were hatched to eliminate Arshad Sharif and Imran Khan before the appointment of the next army chief.

Responding to a question as to why Nawaz sought his help for alleged assassination plots, Shah said: “Nasir Butt introduced me to Nawaz Sharif, saying that he [Tasneem Haider Shah] is an influential person of Gujrat and they have shooters and are capable of executing [assassination plots]”. Meanwhile, PTI leader Fawad Chaudhry demanded a probe into the serious allegations levelled by Haider.