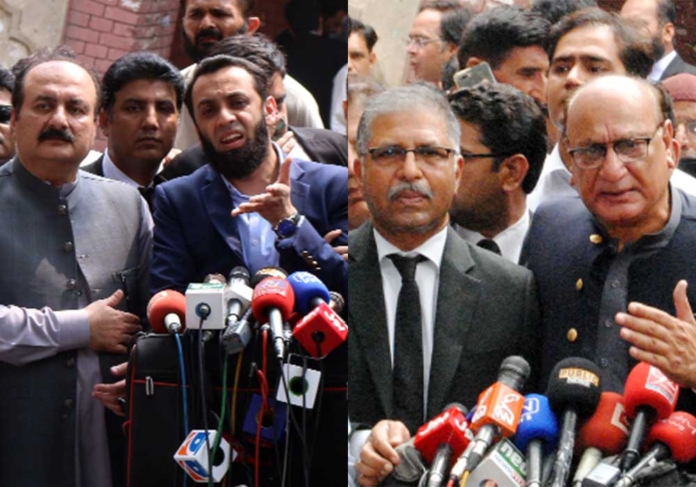 Punjab Chief Minister Hamza Shehbaz has welcomed the LHC decision, ordering a recount of votes for the election of Punjab’s chief minister.

Presiding over a meeting of the Pakistan Muslim League-Nawaz (PML-N) parliamentary party and its allies to discuss the emerging situation, the chief minister said that the ruling will end the three-month-long constitutional crisis in the province.

“We welcome the decision of the Lahore High Court. The elections will be held as per the court order,” PML-N leader and Punjab Home Minister Ata Tarar said after the meeting, announcing the ruling party enjoyed a majority and allies were with it. “If 25 votes of Pakistan Tehreek-e-Insaf (PTI) dissidents are excluded, even then our members are 177 in the Punjab Assembly”.

He said that if someone will try to create a law and order situation then they would be charged with contempt of court. He added that the LHC had neither declared the election of Hamza Shehbaz void nor ordered new elections. He went on to say that the court had also not removed Hamza from his office; rather it gave “protection to the steps taken by him”.

Meanwhile, Punjab Assembly Speaker Parvez Elahi, who was a candidate for the Punjab CM slot, raised objections over the “organization of elections on immediate court notice” during a press conference along with Pakistan Tehreek-e-Insaf (PTI)’s Mian Mahmood ur Rasheed and other leaders of both parties at his residence.

As the Election Commission of Pakistan (ECP) is yet to notify five members on reserved seats and seven MPAs of the PTI are out of the country for Hajj, Elahi was of the view that the elections could not be organized with an incomplete quorum in the Punjab Assembly. He demanded the organization of CM’s elections after by-polls on 20 seats, which are scheduled for July 17. “Five lawmakers are not getting the order for notifying their election. The election commission is seeking court orders for notifying five lawmakers. How can we call it justice?”

Elahi said the LHC once again deputed the same presiding officer (deputy speaker) for CMs’ election who played a “controversial role” in the previous polls.

The opposition alliance announced that it would challenge the LHC ruling before the Supreme Court.

“We are filing an appeal against the LHC order in the Supreme Court on Friday morning,” PTI leader Raja Basharat said during the presser. The Punjab Assembly has a total of 371 members, of which, at the moment, 20 seats are vacant and are up for re-polling on July 17, bringing the total number at 351.

The ruling PML-N has a majority of 165 members but among four of its MPAs rebelled against it previously two had announced that they would back Shehbaz and two were still undecided, bringing the PML-N count to 163. Among five independents, Chaudhry Nisar is unlikely to participate in the polls. Seven members of the PPP, one from Rah-e-Haq Party and four independents bring the total number of the government alliance to 175. The PTI with 158 members and the PML-Q with 10 make the number 168 and if the ECP notified five members of the PTI today (Friday) it will make their joint number 173, two less than the government alliance.

Meanwhile, the provincial assembly secretariat has issued a schedule and code of conduct. According to the schedule, the Punjab Assembly session will be held today (July 1) at 4 pm.

Following the Lahore High Court’s (LHC) order, PML-N Vice President Maryam Nawaz berated the PTI, saying it has “snatched the right of the people of Punjab.” “From snatching the mandate from people in 2018 to plundering Punjab’s money through Usman Buzdar, Farah Gogi and Bushra Bibi, Imran Khan’s list of crimes are long against Punjab,” she wrote on Twitter.

Maryam said that Khan had “snatched the rights of people and created problems for them.”