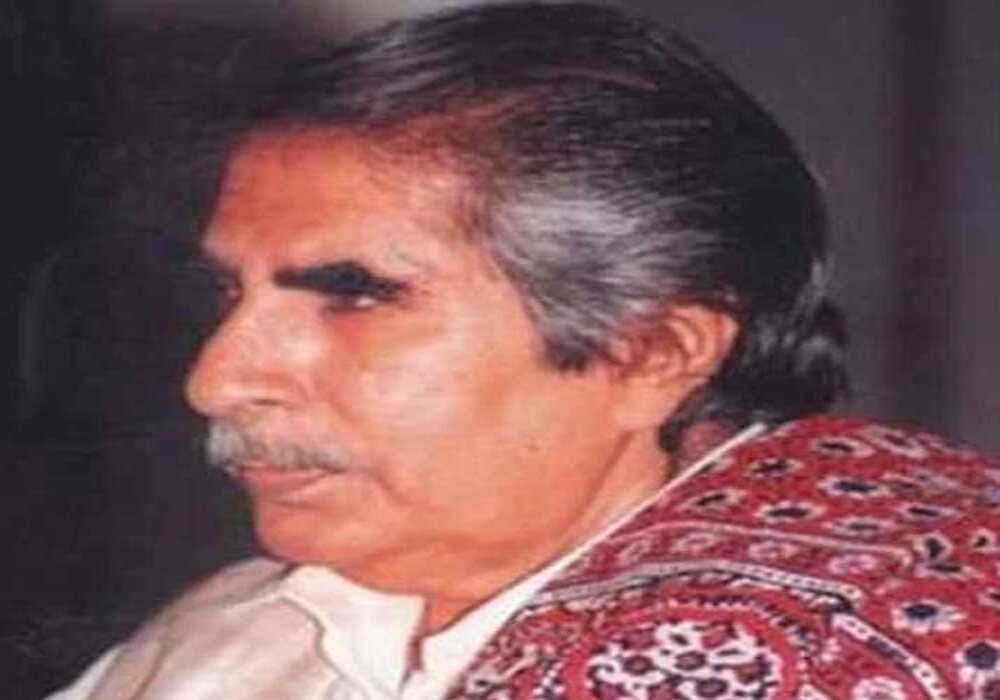 The 25th death anniversary of the versatile poet of Sindhi and Urdu language Sheikh Ayaz will be observed today (Wednesday).

Sheikh Ayaz was born in Shikarpur, a historically rich city of Sindh during British rule on March 2, 1923, in the home of Ghulam Hussain Shaikh and he passed away on the evening of December 28, 1997. His father served in the Department of Revenue and married three times. Ayaz’s mother was a Hindu widow who fell in love with his father and abandoned her family to come to him and perform nikah. Ayaz groomed his skills by becoming in the company of Sobhu Ghyanchandani, Gobind Malhi, Ibrahim Joyo and the founder of the modern nationalist ideology of Sindh, Hashoo Kewalramani.

Shaikh Ayaz lived his whole life in pursuit of a vision and he turned restless whenever anything contrary to his vision occurred. Both his poetry and prose aligned with his vision which has a cultural and civilizational continuity of its own. He invented fresh diction for old symbols. Ayaz as a poet not only revitalized the message infused in Bhittai.s poetry but also made his own distinct identity as a revolutionary as well as a romantic poet of Sindh. He depicted the natural beauty of Sindhi through his poetry that attracted history lovers towards Sindh. In his Biography, Sheikh Ayaz mentioned his meetings with crusaders including late Indian Actor A.K Hangal and I.K. Gujral who later on became Prime Minister of India.

The political history of the country also revolved around Sheikh Ayaz as his work was adored by Bhutto, Mujeeb as well as Ayyub Khan. Since Ayaz was an illustrious academician and lawyer of the country Bhutto appointed him as the Vice Chancellor of Sindh University where he encouraged youth to participate in literary gatherings and organised conferences on different issues of the country. Two prominent Urdu poets of the country Faiz and Faraz praised him for his commitment towards the Sindhi language and the way he improvised Sindhi poetry. During the movements launched against the dictatorship, he not only participated as an activist but also created awareness among the masses through his poetry and for that he was put behind the bars.

He was a successful legal practitioner specializing in criminal law. In addition to his legal practice in criminal law, he took it upon himself to serve as the Vice-Chancellor of the Sindh University on the insistence of Zulfikar Ali Bhutto, who considered him to be a genuine intellectual and a rich cultural voice of modern Sindhi literature. He was a renowned criminal lawyer in the legal fraternity of Sukkur where he chose to establish his legal practice.  Besides translating the poetry of Shah Abdul Latif Bhittai the Legendary Poet authored around 50 books of his poetry along with it he also wrote novels and short stories in the Sindhi Language Notable Sindhi Singers who Sang his Poetry, prominent among those were Sadiq Faqeer, Sajan Sindhi, Mumtaz Lashari, Ustad Mohammad Yousif, and Waheed Ali.

Sadiq Faqeer was the one whom he liked most and called Sadiq’s voice the most suited to his words. Ayaz was bestowed with Sitara-e-Imtiaz for his remarkable literary work by the government of Pakistan The towering literary figure left this world on 28 December 1997 and was buried next to the shrine of Shah Abdul Latif Bhittai. He will be remembered for his eminent work in the field of literature.